A Bookstore With A Heart

A Bookstore With A Heart

Where the love of books meets the fight against homelessness and AIDS. 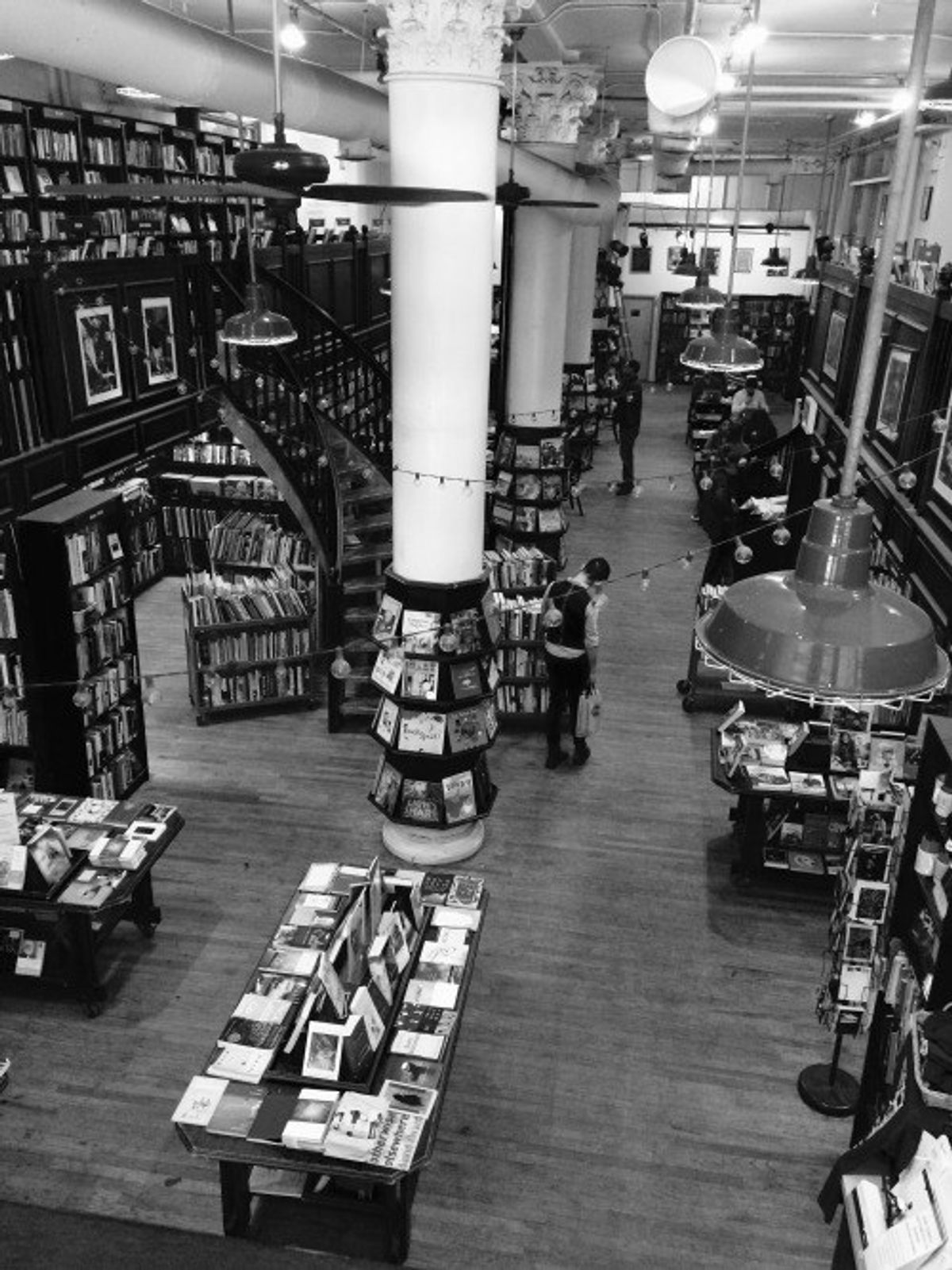 A flag bearing a small grey house with a red roof waves softly in front of the iron façade of a building that houses a very special bookstore. Once inside, one is greeted with the sight of thousands upon thousands books. They cover every table and crowd each shelf that lines the walls. Some snake up the four Corinthian columns in the center of the large room. Their papery odor fills the air. Tucked away in a back corner, a small café serves coffee, soup, and sandwiches to hungry readers. Some call this place “an oasis,” a nostalgic nod to simpler times. In addition, for hundreds of low-income and homeless New Yorkers afflicted with HIV/AIDS it is so much more. Every purchase at this bookstore brings them one step closer to having a home of their own, and regaining control of their lives.

The Housing Works Bookstore Café first opened in 1996 on Crosby Street in New York City’s SoHo neighborhood. The bookstore and 13 thrift stores scattered throughout the city function as the fundraising arm of Housing Works, a nonprofit organization that, according to its website, seeks to “end the dual crisis of homelessness and AIDS.” All merchandise, including books, clothing, and housewares sold by these businesses, is donated.

Keith Cylar, Charles King, Eric Sawyer, and Virginia Shubert, four members of the famed AIDS activist group, ACT UP, founded the organization in 1990. Together, they dedicated themselves to helping New York’s City’s neglected population of homeless men, women, and children afflicted with HIV/AIDS. They named their organization “Housing Works” because they believed that having permanent housing was critical to helping those affected with HIV/AIDS to live healthy lives and prevent further spreading of the virus.

Housing Works, according to its website, helps more than 5,500 low-income and homeless New Yorkers with HIV/AIDS annually by providing them with services such as housing, addiction counseling, job training, and legal help. The revenue generated by the bookstore and thrift shops accounts for about 20 percent of Housing Works’ almost $70 million annual operating budget, making around $20 million in revenue per year.

Besides book sales, the bookstore raises money through café sales, and by renting out the space for private events, which can even include weddings. Conveniently, there is an annual event called “Bride on a Buck” hosted by the Gramercy Housing Works thrift shop where prospective brides can get great deals on designer dresses, shoes, and accessories for the big day.

“Book lovers who fall in love may want to have a wedding here, and sure enough, they do. We have weddings here almost every weekend,” said store manager Heidi Tannenbaum in a recent Huffington Post video about the bookstore.

While online book sales generate the most profit, volunteer Vera Graaf believes that the ability come to the space in person is essential for the bookstore to continue to attract donations and keep customers coming back.

“The bookstore is a neighborhood resource,” said Graaf, who has lived in SoHo for the past 35 years. “It supplies a homey feeling, a sense of belonging, and a relaxing atmosphere, all things we have lost elsewhere.”

The main way the bookstore brings the local community together is through its public events program. As often as five days per week, the bookstore welcomes the public to events including, but not limited to, book launches, slam poetry readings, Q&A sessions with authors, live music, and comedy sketches. One of the more popular events is the bookstore’s monthly “StorySLAMs” hosted by the Moth, a nonprofit literary organization that holds live storytelling competitions based on a selected theme in several cities across the country one-three times per month. According to the bookstore’s website, this event always sells out.

“I think a lot of people see the bookstore as a community hub for cultural programs,” explained public events coordinator Molly Quinn. “The objective of my job is to raise the public profile of the bookstore by bringing in interesting things.”

The customers that flock to this homey space to shop and attend events are quite diverse.

“We are getting people from all walks of life,” Speck explained, “and I’m always surprised how our customers… come in knowing about Housing Works… and sign up to volunteer without any sort of prompting.”

Bookstore staff and volunteers are always happy to inform customers without prior knowledge of Housing Works of the larger organization they support.

Speck said: “It’s really nice when you can give people that ‘light bulb moment’… and say, ‘By buying this book, you’re helping put someone in a home. You’re helping someone get healthcare or addiction counseling. That’s a good deed!’”

While attracting new customers and donors is important, the Housing Works bookstore could not function without the army of over a hundred volunteers who fills the 19 four-hour shifts each week and helps out during public events.

“It’s an interesting opportunity,” said volunteer Lauren Oster. “There’s nothing like the sheer pleasure I get from volunteering in a brick and mortar bookstore.”

The volunteer population includes avid readers, philanthropists, and even clients of Housing Works participating in their job-training program. Frequent customers sometimes turn into volunteers themselves.

“I came often as a visitor,” said Graaf; “the easy next step was to become a volunteer.”

The same was true for Speck, who before becoming assistant store manager was a volunteer and regular customer himself.

However, he emphasized that whether you donate, shop, or volunteer, “You’re making a difference.”

Since most customers and volunteers never interact directly with Housing Works clients, it can sometimes be difficult to comprehend the impact their donations, time, and money make upon those lives. Yet, for clients of the organization like Eric Bartley, being able to utilize the programs supported by donors and volunteers is life-changing.

Bartley, a native of Detroit, contracted AIDS in 1980 at the age of 18, and has also battled drug addiction and homelessness. As of now, he has survived an astounding 34 years with the disease, a feat he has attributed to the adoption a better lifestyle and the unwavering support of Housing Works.

“Through the philosophy of harm reduction that was introduced to me through Housing Works… I have reduced the harm in so many areas of my life,” Bartley explained. “I apply it to all areas of my life. I eat better. I rest better. I exercise better.”

Bartley, currently secretary to the Housing Works Board of Directors, joined the Housing Works community in 2006 after arriving in New York City on a Greyhound bus from Los Angeles. Since then, he has become very involved in the organization through advocacy leadership and the coordination of fashion shows whose ticket sales raise money for Housing Works programs. Not only is he able to pursue his passion for fashion, but also benefit members of the HIV/AIDS community at the same time.

“What I did not anticipate was how Housing Works' organization would help me discover who I am as an individual…” Bartley said. “They allowed me to be myself. They accepted me with all of my flaws. They gave me a voice, and allowed me to speak loud, and be proud, of having this disease… and be a part of the solution, and not so much of the problem.”