I Live In Boston And Don't Love The Patriots
Odyssey

I Live In Boston And Don't Love The Patriots

But I respect the hell out of their intensely loyal fans. 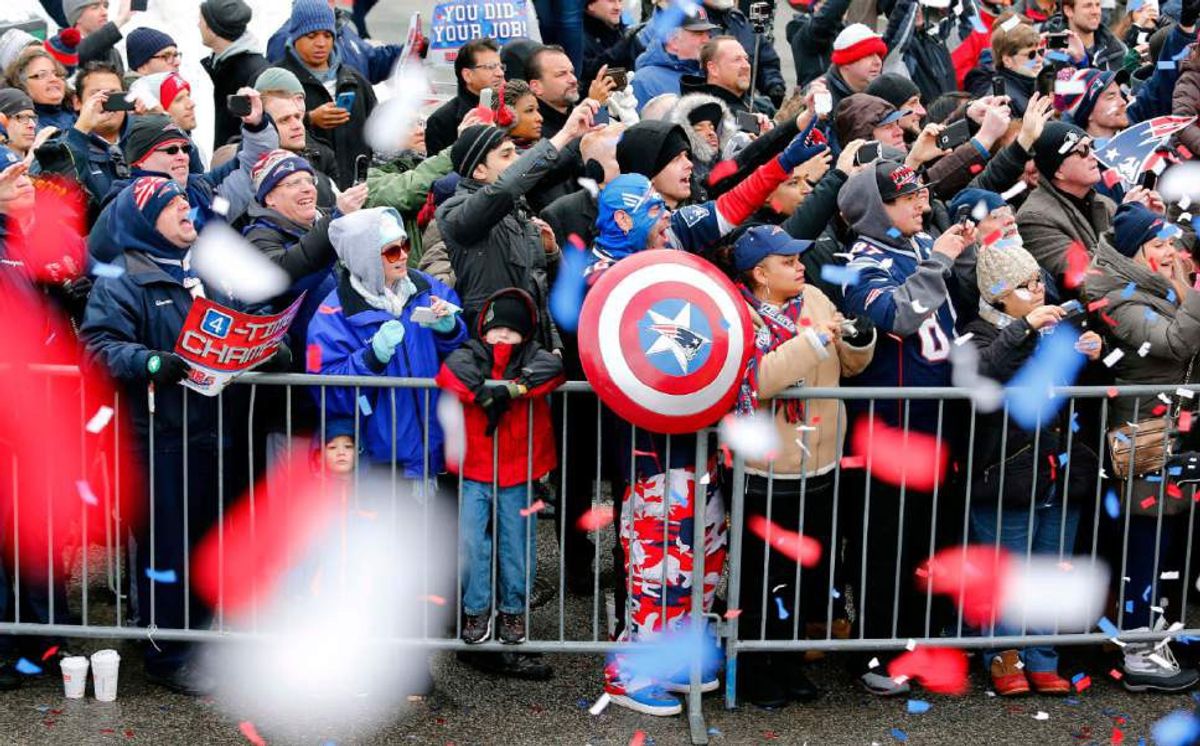 A couple of weeks ago, the weather in Boston was completely bipolar (just like everywhere else in the nation ). One day you could see a glimpse of spring peeking out underneath the edges of the heavy winter blanket. And then, as if mother nature realized too many people were outside, it was back to 25 degrees. In any other part of the country, people blame this weather pattern on global warming, or the winds, or even Donald Trump. But some Bostonians believe that this abrupt change in weather was caused by Bill Belichick -- the New England Patriot’s head honcho.

You see, the Patriots were playing the Houston Texans in the AFC semifinals, and the warm weather just wasn’t cutting it. The Texans are used to warm weather -- they’re not used to the usually frigid temperatures that frequently take over New England. So obviously Bill Belichick turned on the “weather machine” and dashed any hopes the Texans had for a comfortable game.

If I told anyone a man changed the weather with a machine, they would look at me like I was crazy and ask how I escaped from the local mental institution. But if I told them that it was Bill Belichick, the head coach of the New England Patriots, who changed the weather, they would just chalk it up to me being a typical Patriots fan. Because the truth is Patriots fans are crazy. They’re passionate, loyal, and intense, but mostly crazy.

Now, I am by no means a football expert. Despite what I wish, I was never one of those cool girls that sat and watched football, yelling at the TV. I watched the Super Bowl for the commercials. I don’t know much about football and most of what I know pertains to the Washington Redskins (which apparently doesn’t mean a lot). I don’t know the ins and outs, the number of rushing yards or even the number of Super Bowl champion rings any given team has. It wasn’t until last year that I even understood half the calls that take place on the field. I’m sure that people could read this and say I don’t know anything about football, and I would look them in the eyes with my pride intact and say, “You’re absolutely right.”

But even with my limited knowledge, I knew about the Patriots. My roommate, who’s been my roommate for five years now, is a Patriots fan. Going to college in Virginia, she was the lonesome Patriot’s fan in a sea of burgundy and gold. And it looked miserable. Almost every party we went to ended with her standing on a crowded deck, angrily defending her team against a posse of angry frat boys. I would stand by her being sure to add my two cents (“Yeah, well, Tom Brady is married to Gisele, so take that!”) as I wondered how could she stand the constant abuse from these other sports fans. Was this team really worth the side-eye glances and scoffs when you walked into a room? One time I forgot my keys, so I borrowed my roommate's set; they were attached to a red and white Patriots lanyard. I set the keys down on a desk, and one of my professors said, “Wow, Patriots? Really?” I tried my best to defend them. ("Yeah, well, Tom Brady is married to Gisele, so take that!”)

I didn’t understand the loyalty of Patriots fans. And then I moved to Boston. It all suddenly made sense. I remember walking down the street during my first week and seeing a homeless man, surrounded by empty beer cans, wearing a Tom Brady jersey. I wanted to go up to him tell him he could get money for that jersey he was wearing, but I’m pretty sure he would’ve told me he’d rather go hungry. To the people in Boston, football is so much more than a hobby.

If I were Tom Brady I would never want to leave New England because he’s treated like a god here, and I’m not exaggerating. Apparently, you can get a number 12 jersey with “GOD” as the last name on the back. Every man wants to be Tom Brady and every woman wants to be with Tom Brady. There’s an Under Armour store in Boston that is solely dedicated to him. When you walk in, there’s a giant, three-story picture of him, and it feels a little bit like a crucifix above an altar. I walked in and looked around trying to find someone else who was appalled by this, but everyone who saw it just seemed to give it an appreciative nod.

Everyone seems to know everything that’s going on with the Patriots at all times. Every trade, every suspension, every issue surrounding something called Deflategate. I saw two guys on the train who didn’t know each other start a full-fledged conversation about passing yards. When they left each other, instead of offering a goodbye, they yelled, “Go Pats!"

Even the people you least expect to be fans are die-hards for this team. The cutest, most pleasant older man I work with came over to me last week and said quietly, "Fuck the Steelers, right?" I had to take a moment to adjust to the fact that this Mr. Rodgers look-a-like just dropped an F-bomb (and in the middle of a workday). But anything for the Patriots, right? I made the mistake of telling a coworker that I was a Redskins fan and he replied with an appalled look on his face, "How could you not be a fan of the greatest football team there ever was?" I replied with a very noble, mumbled response.

But my favorite story about Patriot loyalty revolves around a fan who denied ESPN the rights to use his photo of Coach Belichick sleeping on a ferry to Nantucket. The picture tweeted depicts Belichick, mouth agape, dead to the world around him. ESPN politely tweeted at the user, asking for the picture to "use on all platforms." And instead of the seizing the opportunity to be featured on ESPN, the Twitter user replied, and I quote,

"No chance @ESPN, you started Deflategate.
DO.
NOT.
USE.
MY.
PHOTO.
#LoyaltyToBill#LoyaltyToTom#LoyaltyToKraft"

Did I mention that Patriots fans can be a little petty?

The truth is that I think I've figured out why these fans are so crazy. It's just the way the people of Boston are. Sure, they're loud and in your face and have the strangest accents, but they are also intensely loyal -- loyal to the point that most New Englanders still feel like they have a chip on their shoulder from the Boston Tea Party... which happened almost 250 years ago.

The Patriots (and all New England sports teams) are Boston's pride and joy, and it's something to be desired. I still think that most things they do are ridiculous -- the "Fuck Goodell" shirts, the Tom Brady and Bill Belichick shrines, the utter hate for any team that's beat them in the Super Bowl. But If I was to get in a fight (and in this hypothetical situation I needed a crew to back me up), I would pick someone from Boston to stand by my side, no doubt about it. Because no matter what happened, I know they would have my back. I also know that they'd probably know how to fight and could talk shit a lot better than I could.

So as the Patriots make their way to what seems like their 100th Super Bowl, I'm sure football fans around the country are mad as hell. But I advise you to take a trip up to Boston. You might be annoyed by the fandom, but I promise you you'll have a better understanding of their insanity. Also a word to the wise to anyone that is visiting Boston: the best time to do any errands or sight-seeing is during a Patriots game. I guarantee no one is going to be in your way.