Hockey players are so much more than toothless, scarred beasts. 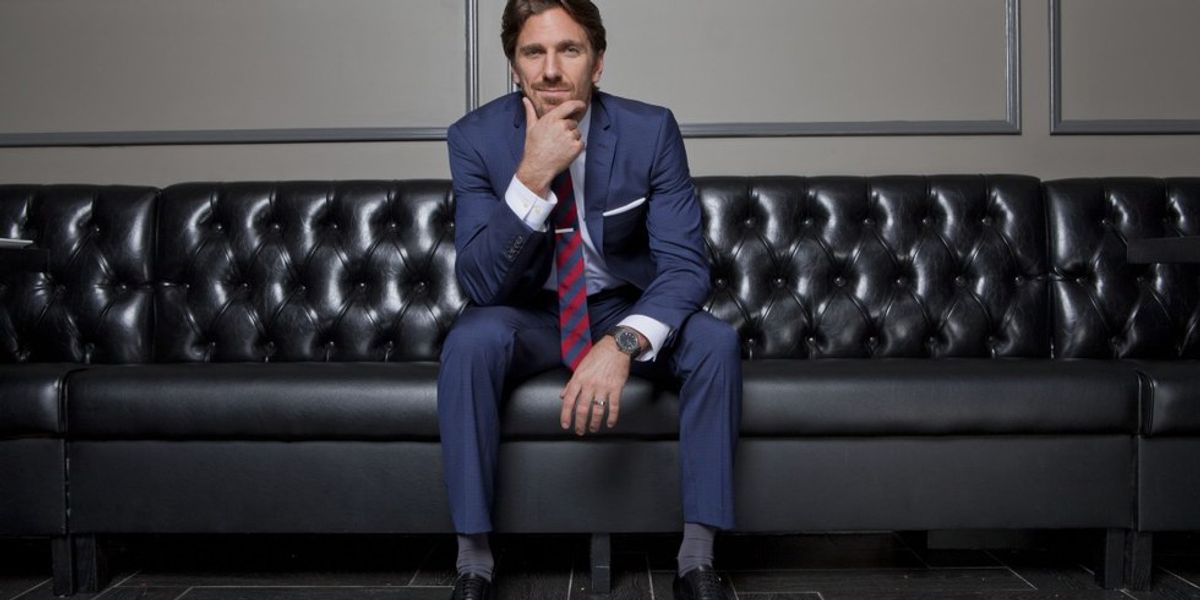 As a lifelong fan of the NHL, I've grown up watching the tough and rugged players on the ice. I have learned to appreciate their ice presence when they're playing and now I can appreciate how well they clean up off ice. I believe hockey players are some of the most underrated athletes in America. They're more than just scarred up, toothless beasts. These ice gods heat up the ice with not only their talent, but with their looks as well.

Since the hockey season is in full swing, I felt it was an appropriate time to recognize their attractiveness along with their talent. So without further ado, here are the hottest male professional hockey players in the league as of today.

This studly player is impressive at every angle. He is second in the league only to Alex Ovechkin for most goals scored this season. That, along with sex appeal such as his, makes him a major cause of racing hearts and swooning.

Captain of the Oilers and environmental extraordinaire, he has skills on the ice that pertain to more than just good stats and records. His care for the environment, smoking hot looks, and performance on ice are three reasons why he is featured here.

While being one of the best goalies in the league, Carey Price is one foxy man. He has hockey in his blood: his father played for the Philadelphia Flyers. That explains his incredible talent which led him and his Canadian team to win the 2014 Sochi Olympics.

He does, however, have a wife. I can only hope I become as lucky as her and all of the other NHL wives.

Chris Higgins? More like Prince Charming. His swoon-worthy charm and sweet persona draw attention to him. That, and his incredible abilities as a hockey player. He is one of the most respectful players in the league, making him a man no one can hate.

This hunk has everything going for him: a second-to-none defenseman rating, long and luscious hair, and those muscles. He's just 25 years old and has been playing for seven seasons. I wouldn't mind being able to meet him and see if those muscles really are bigger than my head.

This man has made himself a household name along with being extraordinarily good looking. As the captain of the Penguins, he is incredibly skilled on and off the ice. It's approximated that he earns $8.7 million per year. If he's getting paid that much for less than perfect puck handling, it must mean he's good.

This beauty is a defenseman with one Stanley Cup win under his belt. He's even won gold medals at back-to-back at the World Junior Championships. He has all that plus looks; what a catch. However, he's got a son that means the world to him, along with a very lucky wife.

Beau is 6'2" of pure handsome. His boyish charm and potential star athlete are hard features to overlook. He is working his way up to making a name for himself, as he is just 24 years old. Ladies, get a hold of him while you still can.

This proud papa is a ten year veteran defenseman. His looks aren't the only thing he excels in. Without him, Chicago's defense would be missing a key part of their team.

While he is a two time Stanley Cup winner, Carter is a beautiful man as well. He's a ten year veteran. Surprising, right?

This romantic proposed to his girlfriend just days after winning his second Stanley Cup. So, sorry ladies, he's happily married.

His veteran status at age 35 seems like a fictional statement. He does not look 35 whatsoever. My theory is that he's a vampire. Or maybe he just ages well.

In his career, he has scored 308 goals as a left winger for the Red Wings. He's got the looks and the talent, as do most of the men on this list.

As captain of the Rangers, McDonagh is a renowned defenseman. His grace on the ice makes him a key player in the Rangers' lineup. Injuries have plagued him this season, but his skills have yet to falter.

For those of you who love men with long hair, TJ Oshie is your guy. He's got the flow not only with his luscious locks, but with his hockey skills as well. He's a veteran winger that is as good on the ice as he is in looks.

This Swed has only been in the league for 2 years, so he's a pretty new face to the NHL community. So, look out for him in the next few years, ladies. This 21-year-old is a promising athlete and exceptionally gifted in the looks department.

This Canadian defenseman is a key player on the ice for the Red Wings. He is a well-suited veteran, playing in the league for 10 years. Despite his veteran status, his looks have been constant through the years.

His muscular build is necessary during games and greatly appreciated when the pads come off. I'm sure those muscles are bigger than my head.

This veteran has been in the league for 13 seasons, but has not lost his charm. He has been with the Canucks for 11 of those seasons; he was traded to the Ducks only two years ago. His talent goes past his hockey skills as he released his own clothing line, "RK17."

He is married and a father of three beautiful children. Sorry ladies, but there are more men to choose from on this list that are just as attractive.

Tall, dark, and handsome. Standing at 6'1", this center has made a name for himself throughout his eight years in the league. Originally drafted by the Columbus Blue Jackets, he was later traded to the Rangers, where he has been a star. As a Rangers' fan, I am not complaining whatsoever. He has netted 122 goals throughout his career and his on-ice presence is essential to the Rangers' playmaking abilities.

He is, unfortunately, taken by former figure skater Terra Findlay. She's a lucky lady to be with such a talented, good looking man.

I would do anything to see him riding the zamboni as he's pictured above at intermission. This 24-year-old Canadian was drafted in the first round, second overall. He's netted 32 goals this season already, which is tied for third in the NHL behind Alex Ovechkin and Patrick Kane.

Along with his impressive on-ice skills, he is unbelievably attractive. Look how toned his legs are! To my knowledge, he is single as a Pringle. I just wish he would mingle somewhere near me.

This 24-year-old has been in the league for four years and I only just discovered him during my quest for attractive hockey players. He's not a very well-known player, but he's incredibly talented and single. Go get him ladies!

Number 30 on the ice and number 1 in my heart. I may be a bit biased, being a Rangers fan and all, but there is no doubt that Henrik is the most attractive player in the league thus far. He's also one of the best goaltenders to ever grace the ice. Recently -- February 25, 2016, to be exact -- he passed Mike Richter for most saves in the Rangers' franchise history in their win against the Blues.

Sorry ladies, this Swed is married happily and has a young son. Therese Andersson is one lucky lady.

Now, I can only hope that I am lucky enough to marry an NHL star. It's my goal in life to score one of these extraordinarily attractive men. (Bad pun? Sorry.) A girl can dream, can't she?