Selfie-Taking Sorority Girls Do the Right Thing
Odyssey
CurrentlySwoonLifestyleHealth & WellnessStudent LifeContent InspirationEntertainmentPolitics and ActivismSportsAdulting
About usAdvertiseTermsPrivacyDMCAContact us
® 2023 ODYSSEY
Welcome back
Sign in to comment to your favorite stories, participate in your community and interact with your friends
or
LOG IN WITH FACEBOOK
No account? Create one
Start writing a post
Sports

Alpha Chi Omega at ASU make the most of their viral fame. 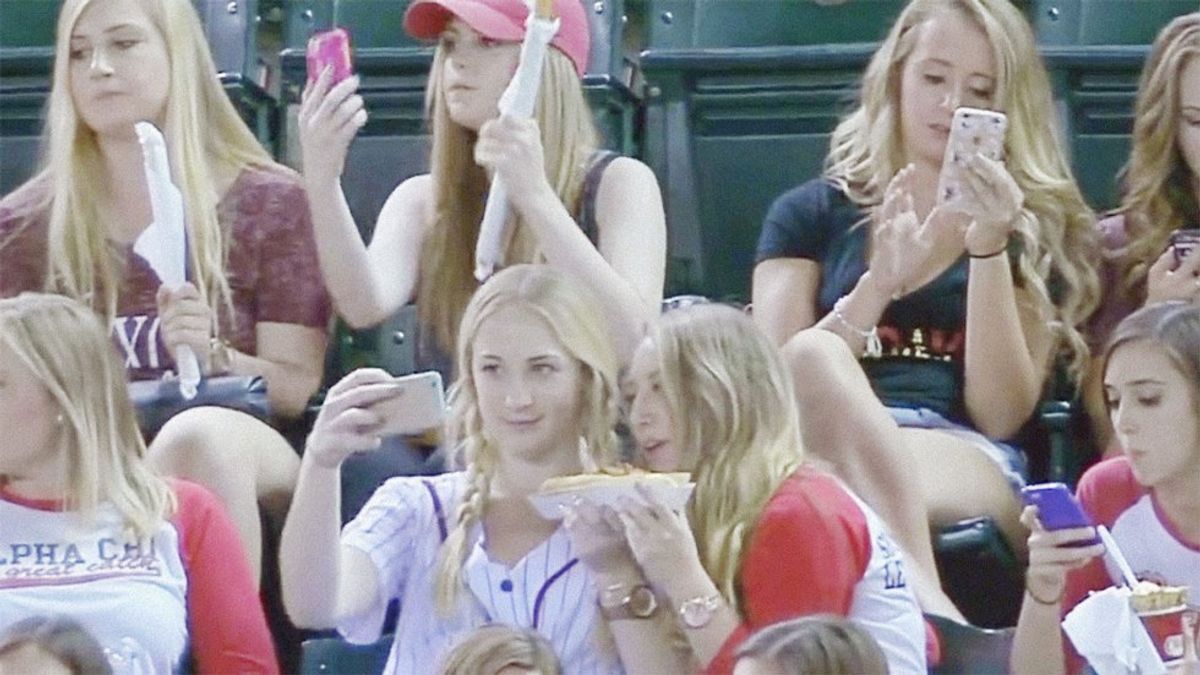 A few weeks back, we saw the video of a bunch of sorority girls taking selfies and ignoring the Diamondbacks game they were attending. The broadcast team absolutely tore into these girls because it was well, funny to watch. If you somehow missed it, watch it here.

Since that video went viral, all sorts of reactions have exploded across the internet and the sports world. You have the people who are outraged by the girls' self-absorbed duck faces and lack of attention to the game. To those people: relax. It’s a game between two teams with their seasons already over. It’s also a baseball game. Sure, their attention spans may be a little short, but they’re not at a basketball game. Baseball is slow. Really, really slow. Most games, especially a meaningless one in late September, don’t have a lot of action and there’s time for the mind to wonder. Not to mention their tickets probably cost less than their hot dogs.

Then you have the people who are outraged by the announcers publicly shaming these young ladies, which they most definitely did. Many even call it casual sexism. I can see that argument, but I’d be making fun of anyone, male or female, who has a churro next to their head, making a pouty face for their own camera. It’s funny to watch.

Did the commentators go too far? Oh, yeah. Show the girls once, have your laughs, and move on. Instead, the camera panned back to them at every possible chance and the teasing got a little too personal as the broadcasters went into the ever so generic rant about generational differences. We get it, you’re decades older and don’t understand how smartphones work -- or so you claim. Yes, we're glued to our phones too often, but the clueless old man act is getting old. Take a look at this photo:

Yes, I realize they’re reading about important news about the world around them. You can do the same thing with your phone and most people do. Smartphones can do more than text and take selfies -- imagine that.

My generation does have a massive problem with being on our phones too much, but that doesn’t validate the public shaming of a group of girls just having fun at a baseball game. As someone who loves going to MLB games, even I’d be struggling to pay attention at this particular one. You might even catch me looking at my phone. Heaven forbid.

Now, the part that very few don’t know about these girls: they are members of Alpha Chi Omega at Arizona State University. After the video went viral, the Diamondbacks and the local Fox affiliate offered them free tickets to the next game. Ballparks do this sort of thing. They want to have well known fans at their games -- kind of like a free mascot. Think the archetypal fat dude who dances on the big screen every night.

For once, forget the generational gap and attention spans of young people. That stuff doesn’t matter quite as much when it’s overshadowed by doing the right thing. That's something my generation has yet to get distracted from.

Nicole Marie Nigro
Individual Creator
6054
c1.staticflickr.com
Where to start...... Let me start with the cliche that life throws us curveballs and what we do with it is what counts.