Oh what a great week for football. 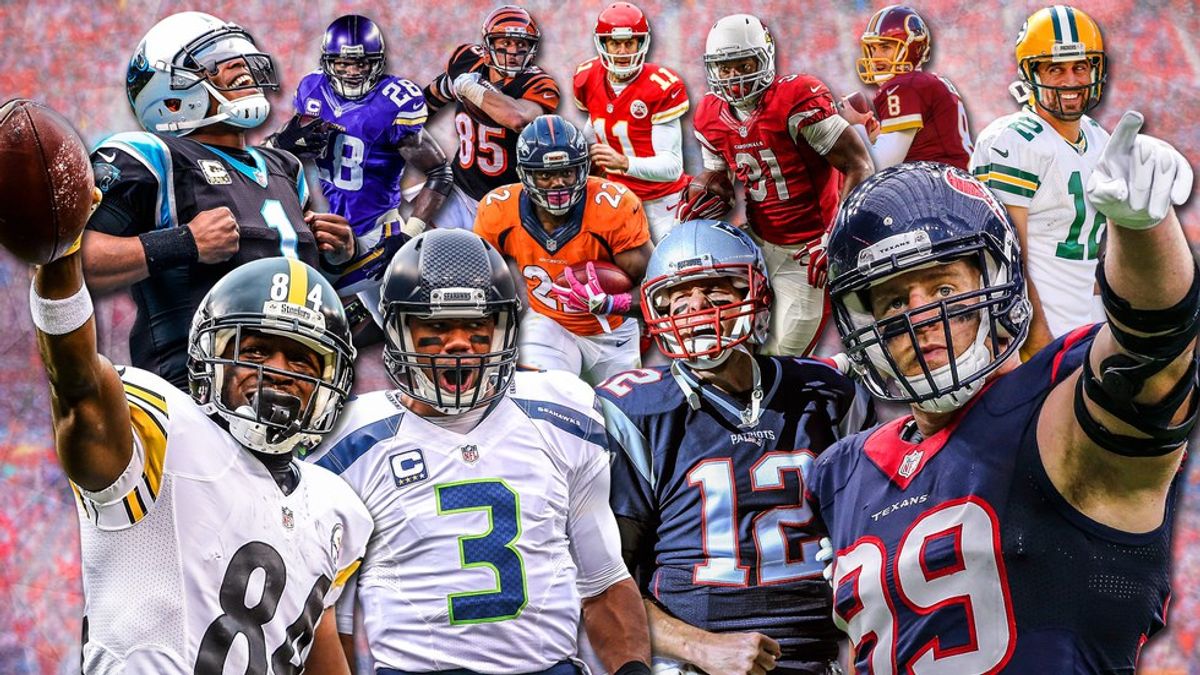 Week 2 is full of great matchups. Sunday is going to be a fun day of football going on all day long. Here are my predictions for each game.

I believe that the Bengals are going to struggle on the offensive side of the ball against this Pittsburgh defense. Even though the Bengals have been good in guarding Antonio Brown, I think Big Ben finds a way to win at home in a nail-biter.

Marcus Mariota and the Tennessee Titans will go into Detroit and win in a boring football game. That's about all I can say. The Detroit Lions are struggling this year on the offensive side of the ball with practically no running game and a limited selection of wide receivers for Matthew Stafford to throw to. I also think that Demarco Murray will get his fair share of yards in this game also. But in the end, Tennessee comes away with a W.

My sleeper team of the year, the Dallas Cowboys, will come into Sunday playing a team with a sour taste in their mouth after their loss last week. But, that won't matter. Day Prescott looks like he is ready to make a name for himself after his week 1 performance. He will connect with Dez Bryant for 100+ yards and Ezekiel will get his fair share of carries in a easy win for the Cowboys.

The New York Giants are a team that looked much better this preseason compared to the last season based off some defensive adjustments, which were needed, and they did a great job holding down the Cowboys last week, but my man Drew Brees produces yards and TD's with the best in the game and he will do that against NY this week. He will connect with Brandin Cooks and that offense and will beat the Giants in ease.

This is practically a no brainer for me. The 49ers are struggling on both sides of the ball and you can do that against the Carolina Panthers who are amongst the best offensive and defensive teams in the NFL. Cam Newton and the Panthers will roll over Blaine Gabbert and the 49ers very convincingly.

Bill Belichick has done it again so far this year with interim QB Jimmy Garoppolo who did a good job last week in their first win. Miami and Ryan Tannehill will put up a good fight with some deep receptions from Jarvis Landry, but the Patriots pull away a win at home over a over looked Dolphins team. They maybe off to a slow start, but their are one team to look out for the rest of the year.

Alex Smith had a great end of the year last year, taking his team to the playoffs and losing in a close game to the Patriots, but they have to go back up against the team they practically embarrassed in the Wild Card. I think Brock Osweiler and Lamar Miller will carry the load and JJ Watt and that defense will force turnovers to win the game in a very heated, emotional and good football game.

Football is back in LA! The first game their is going to be very reckless and very loud as football returns to Hollywood. Todd Gurley will get 100+ yards like he usually does, but it won't be enough to stop Seattle's Russell Wilson and their offense. Chase Keenum will also have a rough time passing that top-notch defense. It will be the start of something great in LA, but overall not the result the Rams want in their first home game.

Arizona is a very good, balanced football team. Carson Palmer does his job as QB and gets over 250+ yards passing and a couple of TD's and Patrick Peterson and that defensive force some turnovers on a questionable Tampa Bay offense. I see that there is no chance that Tampa Bay can contend with this team at their place after the loss they took last year against the Patriots. Plain and simple.

Philip Rivers and the San Diego Chargers are a good offensive team mixed with a shaky defense at times which needs to be controlled against this Jacksonville offense with some studs on their team. Blake Bortles, Allen Hurns, Allen Robinson and that crew are lethal, but they also need to control the good San Diego offense. I think this game will be back and forth but San Diego will win off a field goal in OT in a very fun game to watch.

Derek Carr and the Oakland Raiders got off to a good start last week after being the Saints at their place and I think that trend will continue against the Falcons. Matt Ryan and Julio Jones will connect as usual, but I think home field advantage will take over and control this game. Latavius Murray will have some good rushes, Derek Carr will connect for over 300 yards and 3 TD's resulting in another good win for the Oakland Raiders.

Denver is still good, even with the absence of Peyton Manning. Trevor Siemian really impressed me and showed me that he can still lead this team to a Super Bowl, and I think he will won't disappoint against the Colts. Andrew Luck has started off on the right foot, unlike last year, and he will make it known that he is still among the best QB's in the NFL against Denver. But, in the end, in that stadium against that good of a team, Denver will win this game in the 4th quarter in a great football game on both sides by both teams. One of the biggest games to watch this week.

The Minnesota Vikings are going up against the Green Bay Packers, who has arguably the best QB in football. I am also not a believer in Sam Bradford and that offense. It takes a good defense to keep a man like Aaron Rodgers quiet, and this defense isn't good enough. I think Green Bay wins this game pretty comfortably and improves their record to 2-0.

After watching Carson Wentz last week, I'm sold on his talent and football IQ. Even though they were playing the Browns, he still showed that he can play coming out of college. This kid is the future of football and someone who will be good for a very long time. Him and Jordan Matthews will connect all night Monday night and beat this mediocre Chicago team. This might be the year for Philly if Carson plays the way he played last week.

Emmaline B
The Narrative
14354
https://unsplash.com/photos/O0T1SIgHAfM