A Delayed Review of the Condorstown Winter Classic
Odyssey

A Delayed Review of the Condorstown Winter Classic

Braving the Rain for Outdoor Hockey 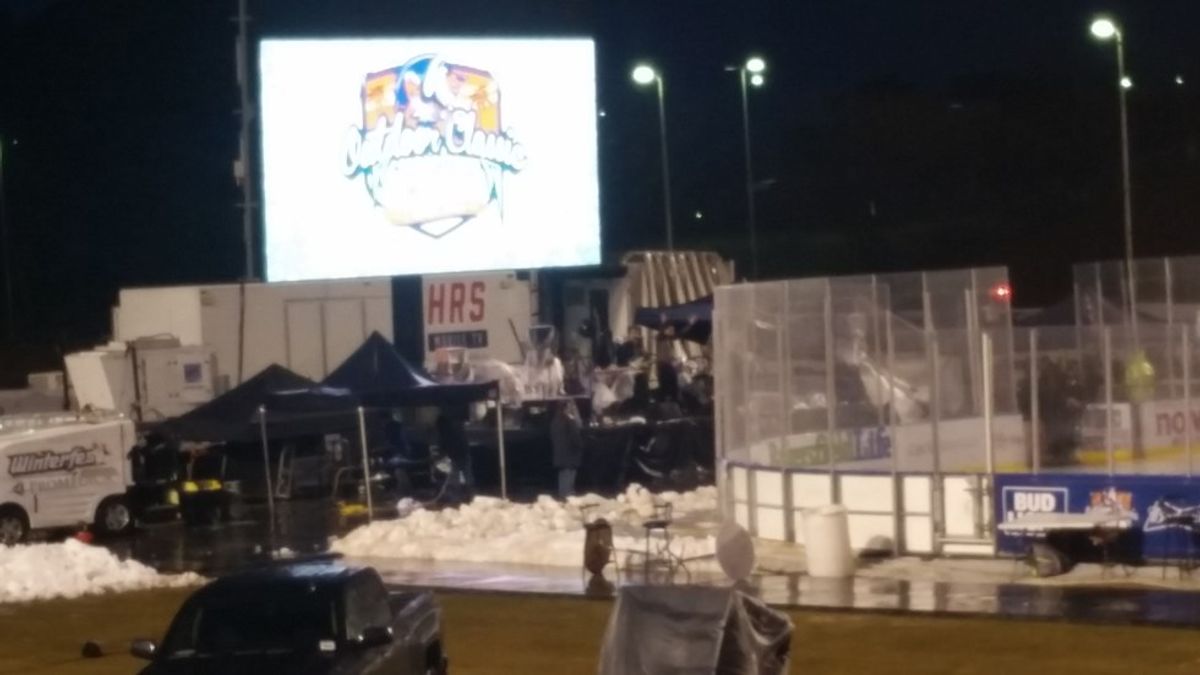 Bakersfield hosted an outdoor hockey game the weekend of January 7th, 2017. Yes, you read correctly. Bakersfield, CA hosted an OUTDOOR HOCKEY game. It was held in Memorial Stadium at Bakersfield College and was made into an event for the ages. It was definitely memorable for every fan that braved the weather that mother nature inflicted upon the game between the Ontario Reign and the Bakersfield Condors.

The Condors called the entire thing the "Condorstown Winter Classic." A subsection of this began in December and went through until the game on January 7th called Winterfest, and consisted of zip-lining, bounce houses, playing in the “snow,” and ice skating on the outdoor rink. Everyone that I talked to that went to Winterfest said that it was really fun.

There were two hockey games apart of the Winter Classic. The Alumni/Celebrity game that took place on Friday, January 6th, where the two teams were alumni of the Edmonton Oilers and the Los Angeles Kings. Both of these NHL teams are the parent organizations for the Condors and the Reign respectively. Two of the notable players that were at the game were Wayne Gretzy (see "The Great One") and Luc Robataille. While Gretzy was an alumnus of both teams, his career began in Edmonton. Robataille is still involved with the Kings Organization as the Vice President of Hockey Operations. There were other alumni, including a former Condors player. All of the fans were hyped up to see Gretzy and Robataille play; however both had unannounced injuries that prevented them from doing so.

Unlike a real hockey game, the alumni game was played in two 25 minute halves. Robataille’s team, the away team, gained an early lead that left Gretzy’s team playing catch-up the rest of the game. Robataille’s team won the game 9-8. Even with the clock being stopped for an entire play at 38 seconds left of the second half. Rumor was that Robataille’s team had their lines set since August had been practicing together since then.

That was the first game. The American Hockey League (AHL) regulation game between the Ontario Reign and the Bakersfield Condors was the game to watch because of the rain. Yes, it rained throughout the end of the first period to the end of the second period. There is barely any cover from the rain in BC Memorial Stadium. The fans that stuck it out got to see the Reign reign in the rain and the Condors make a wonderful comeback to win in overtime.

There were a lot of vendors at Memorial Stadium but my favorite was the hot mini donuts, the perfect snack to battle the chill from the rain. It rained before the game steadily until roughly 4 o’clock. The band on the stage just south of the ice, in the rain, had to pause play so that the lead singer wouldn’t electrocute himself.

The zambonis were constantly on the ice before game time picking up the water off the ice. My friends and I witnessed the zambonis dumping not their usual icy slush, but water on the grass every 15 minutes or so.

The puck drop was scheduled to happen at 6 p.m., but was delayed 30 minutes so the ice could dry out before the players went out. They did their warm-up, the announcement of the starting lines happened, and the singing of the National Anthem, then puck drop went off with out a hitch at 6:30 p.m.

The first period went well. Then something happened near Ontario’s bench. The glass panel on top of the boards came loose. It was taking to any quick fixes so it was announced that the first intermission will happen now and when they got back, the last two minutes of the first period will be played. Then the second period will start after a minute break. The glass being fixed wasn’t the big problem. The rain that started up again during the intermission was the big problem. There are videos of the Reign and Condors playing and everytime the puck was moved off a stick, water would be too. All I can say was, at least the players were moving. I was in the stands, in the cold, wet rain with no umbrella. People were being asked to keep their umbrellas folded up to not impede other people’s view and as a safety hazard.

The Condors didn’t adapt as well as the Reign did in the water they were skating through. The Reign gained their lead and kept it until the third period, which was dry. The Condors scored the game-winning goal about a minute into overtime, causing the few fans that stayed throughout the rain to cheer heartily.

The Condors organization also rewarded the fans that braved these wild elements with free admission to the game on Tuesday, January 10th. Which this fan did go, and is happy to report that they won.

Caitlin Marie Grimes
University of South Florida
9429
Beyond The States