Unpacking The Sport Of Triathlon: What It Is And Why It Matters
Odyssey

Unpacking The Sport Of Triathlon: What It Is And Why It Matters

The triathlete's motto is, why be good at one sport when you can be average at three? 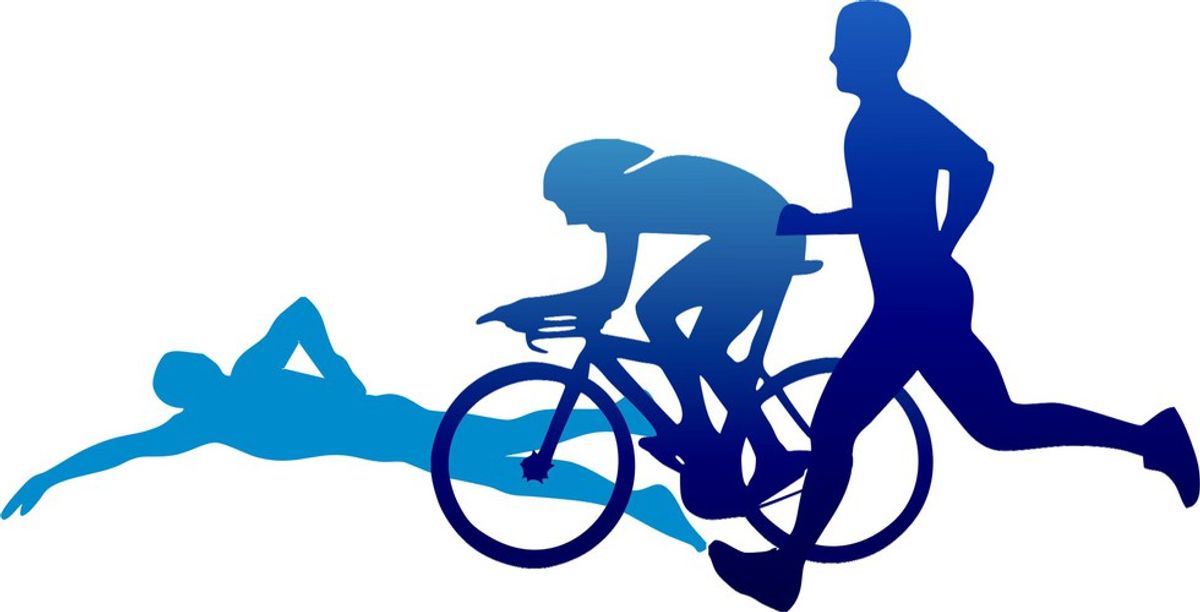 The Riddle Of An Iron Man's Life

Biathlon. Triathlon. Pentathlon. Heptathlon. Decathlon. Yes, there are multiple Olympic sports that include more than one sport/event. Today, we're going to talk about the sport of triathlon. As you may guess, the prefix tri- insinuates that it is three sports packed into one. And it is. A triathlon is made up of swimming, biking and running...in that order. Each particular race may vary in the distances. However, in the Olympics, they compete with a 1,500 meter open water swim, 40K bike, and a 10K run. In non-metric terms, that's about a mile long swim that's not in the pool, 24.8 miles on a bike, and then 6.2 miles of running right off the bike. By the time the race is over, triathletes travel 51.5 km between the three sports. That's a lot of distance. And what's more impressive is that there really aren't breaks in between the three. Here are the race course and venue, as marked out in the spectators guide.

As a triathlete, here's how the race typically goes.

Not going to lie, this is not my favorite part of the race. My anxiety amps up, as does my indigestion, and I'm terrible at swimming in a straight line. Normally, triathlons with open water swims begin with a mass start. Basically that means everyone lines up along the water or sometimes in a line in the water (hooray for being able to tread water for minutes at a time), and waits until the horn / gun goes off, signaling the start of the race. Then mass chaos ensues. See the picture below.

People are swimming over each other and under each other and around each other. If you don't get elbowed or kicked in the face at least once during the start of an open water swim, you can consider yourself lucky. Also, if you do not like having your feet touched, then this is not the sport for you. People will grab, tickle, caress, and yank on your feet. Sometimes by accident, sometimes not. Your goal is to stay alive and make it to end of the swim. To do that, you have to swim to these lovely pyramid-shaped buoys (see picture below) and swim around them. Considering the start of the swim in Rio goes up and to the left, it looks like the first buoy will be at the sharp left turn and triathletes will have to go around the buoy on its right side. You must go around the buoy. You can't just skip it, that's cheating. There will also be cylindrical buoys in the water, in between the pyramid-shaped ones. How you get around them does not matter, they're placed there for spotting purposes than anything else. Once you go around all the pyramid-shaped buoys and see the end of the swim, you just go for it. You get out of the water and you run to go get your bike.

You're sopping wet and riding a bike at upwards of 20 miles per hour. You dry off fast. People pass you and you try to pass them back. Unless it is a draft legal race, you cannot hang on their back tire and get more aerodynamic. If you have aerobars, then you try to use them. People would argue that this is the most expensive leg of the race. Bikes, well, good bikes at least, cost upwards of $1,500. Some people have bikes that cost more than my car. Personally, I got mine on Craisglist for $500. Came with aerobars and a bike computer and I was a happy camper. But yes, bikes are very expensive. If you get clip in pedals, then ones where you basically clip your shoes to the bike so you're straight up attached to it, getting the pedals, clips and shoes to go with them generally costs upwards of $200. Aero helmets, like these below that taper backwards, can be upwards of $150.

Factor in water bottles and nice racing tires (the ones below cost upwards of $1,000 a piece), and this leg of the sport can cost you at least $2,000. And that's the low end of the spectrum. It's also the leg that you're most likely to wipe out on, whether it be in transition or on the course itself. I have had my fair share of wipeouts, and I wish I had some of them on video. But after the bike comes my favorite part, the run.

Getting off the bike is not fun. Your legs feel like jello...or just don't feel anything at all. Sometimes your legs go completely numb, which is also great. And the best part is, there is always a photographer right after you come out of transition...when you look your absolute "best." It's a blast. Sometimes I give them the death stare. Other times I see how much fun I can have with the picture. The run can either go really well, and you can feel like you're flying...or you can feel like death. I love the run, mostly because I've grown up as a runner, and a person who loves distance. I can't always say that it goes the best for me, but I know that once I get off my bike, it's just me and the road. All you need are a pair of running shoes, and you can do it. My goal is to just put all I can into the run, and to pass all the people I can. I know my bike isn't my strongest leg, but I also know that I can dig in and kick it on the run when I need to. For me, there's just something about running that makes it better than the other legs. When I'm running, I feel like myself. However, after a long swim, and even longer bike, running can be painful and very hard. But once you reach the finish line, it's completely worth it.

And yes, in case you're wondering, this is Chris Pratt. Fun fact, he competes in triathlons and this is after he finished a half-ironman, which is a mile and a half swim, 56 miles of biking and a half-marathon. In no uncertain terms, he is a beast. Triathlon is cool. It's hard and frustrating, but it's an incredibly cool sport...maybe because it combines three sports into one.
Report this Content
This article has not been reviewed by Odyssey HQ and solely reflects the ideas and opinions of the creator.