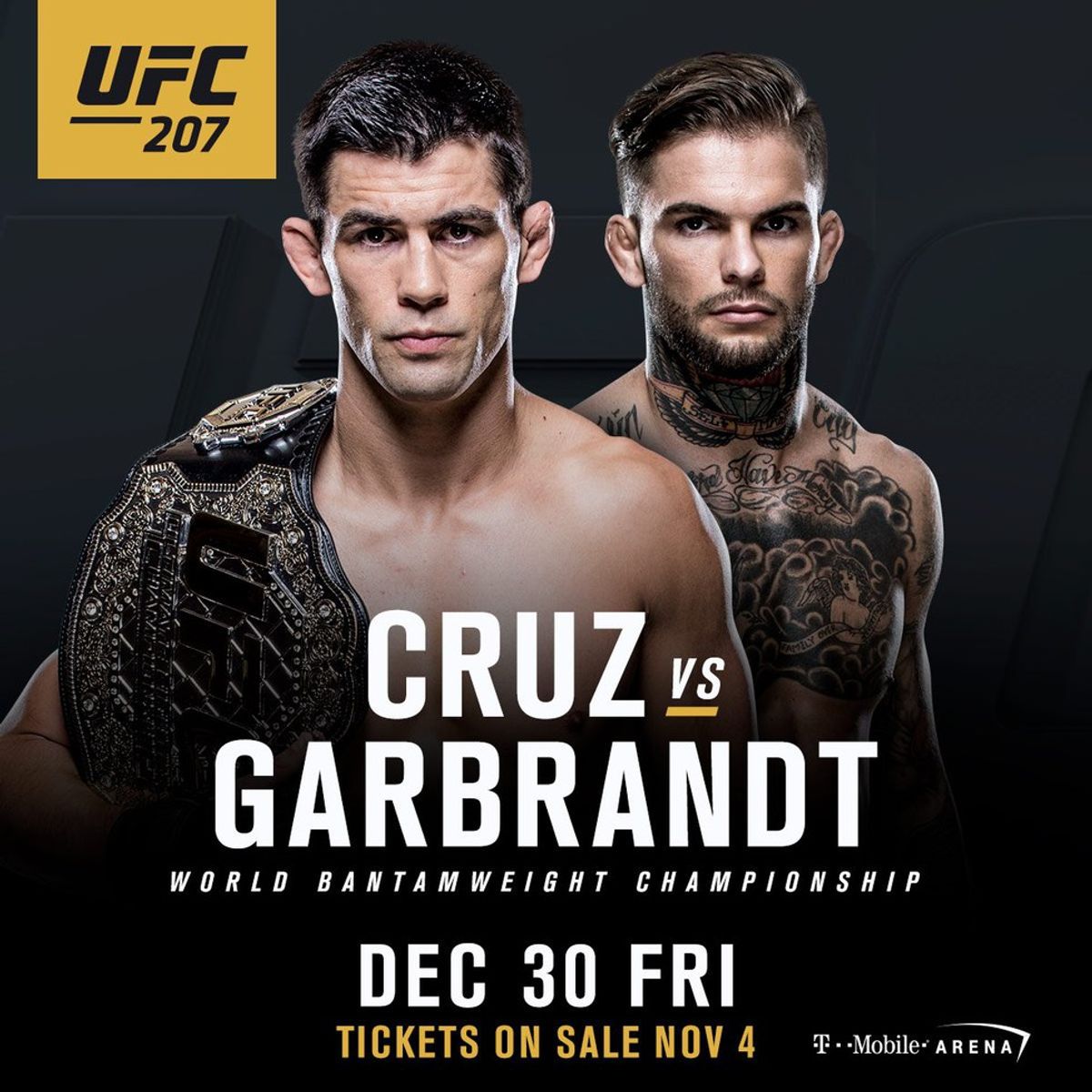 In a recent verbal scrap with Bantamweight Champion Dominick Cruz, Challenger Cody “No Love” Garbrandt attempted to make something which is very peculiar very clear to Dominick Cruz: “I never had to chase p*ssy in my life, and on December 30th I ain't doing it.” Trash talking isn't a part of everyone's persona or strategy, but it can be a valuable tool to generate revenue by creating interest and more importantly it can be a valuable tool to psychologically impair your opponent's ability to follow an effective game plan. Losing in combat sports carries a lot more dire consequences that a bruised ego or or even bruised bones – taking punishment can lead to broken jaws, detached retinas, and various symptoms associated with chronic concussions (i.e., CTE). Cody Garbrandt has vicious power and has sensationally knocked out all but one of his opponents in his 10 professional mixed martial arts matches. The price for underestimating or falling victim to Garbrandt's abilities is paid with your health and so any tactic that a fighter can employ to minimize damage and loss should be praised. Dominic Cruz has never been knocked out in his 23 fights because of his amazing defensive abilities. Although he has only 7 knockout victories, Cruz is ranked within the top 3 of the pound-for-pound rankings on MMAJunkie, Tapology, andESPN because he absorbs little to no damage in his fights, has won 13 fights consecutively and hasn't lost since 2007. If Cody Garbrandt can beat the champion on December 30th at UFC 207 he will undoubtedly catapult himself into the upper echelon of the pound-for-pound rankings.

Being a very skilled defensive fighter has its drawbacks – even if it saves you the headaches which come with being knocked out or concussed, it brings the headaches which come with public backlash. Being a fighter is often synonymous with the foolhardiness to stand and trade blows with foes rather than executing strategies which minimize risks of concussions. That is, the traits most commonly associated with fighters are strength, the ability to mete out violence, and the endurance to withstand your opponent's onlsaught. Deviating from this mold will draw the ire of the average fan and invite complaints of cowardice. Those not yet trained to spot Cruz's defensive genius may prematurely label him as a coward and risk developing a healthy understanding of what skilled combat looks like. I believe that Cruz should instead be viewed as courageous. Aristotle's virtues could be described as a midpoint between two extremes. Courage, for Aristotle, is the mean between the excess of foolhardy brashness and the deficiency of cowardice. Cruz doesn't run out of fear, but instead intelligently induces a chase. If Garbrandt has a clear understanding of this, then his comments of refusing to “chase pussy” may be viewed as a crude, but intelligent remark.

Just about every opponent of Cruz has chased and none have managed to knock him out. Chasing in a fight reduces your ability to meaningfully throw strikes. If you are moving, it makes it relatively difficult to plant your feet in order to deliver force. If you leap into your strike to deliver force, you only have one shot in which to finish your opponent and they may easily evade that attack and make you pay for committing to such an audacious attack. Garbrandt, on the other hand, is very rarely this sort of fighter and that is perhaps the reason that he has been so successful thus far. Cody's background in boxing has helped to mold him into a fighter who constantly keeps his balance underneath him until he is ready to unload strikes. His most recent and spectacular finishes have all come via knockouts with punches and his most recent two have come along the fence. Until recently, no one has been able to knockout the sturdy UFC Veteran Takeya Mizugaki in his UFC career. Cody Garbrandt finished the fight in less than a minute by sticking close to Mizugaki rather than chasing. With his Mizugaki's back to the fence in panel 1 just below, Mizugaki was already in too deep. In the second panel Cody steps in and flashes the left hand.- the deep step puts him closer to his opponent but it may also close off movement away from the right hand when combined with an outstretched left hand. Takeya attempts to fire back but a powerful right hook is unloaded onto his jaw – it whips his head around and takes his legs out from under him. “Cody “No Love” Garbrandt hammers out Mizugaki before the end of the first minute.

The first person to finish Mizugaki in the UFC was the current champion. Cruz's knockout of Mizugaki about a year earlier was just as impressive despite being completed in just about the opposite manner: Garbrandt's knockout displayed beautiful brutality while Cruz's control, finesse, and cage craft were hard to ignore in the fight. Instead of planting his feet in order to generate massive amounts of power, Cruz's feet flowed and enabled him to create befuddling angles, evade oncoming punches, and ultimately induce a fatal chase. Cruz is hardly in the traditional stance. From the outset, he's aptly ready to move. Mizugaki fires a clean right straight which Cruz easily evades. In the graphic below, Cruz steps into range as if to throw a lead right hook in the 1st panel. Despite stepping in, he maintains his ability to slip punches and evades another straight right, while setting up an exit to the area shown in red. Mizugaki follows, but gets out of punching position to do so; Cruz creates another angle by exiting to his own right and Mizugaki follows without chasing too hard. In the 5th panel, Dominick Cruz is seen finishing a 1-2 combination down the middle of Mizugaki's guard. It doesn't land simply because Mizugaki has not yet been drawn into the chase. The punches do force him to back up, which gives Cruz the distance from which he prefers to work at. Cruz's motion right after his punches also force Mizugaki to turn and provide Cruz with more time to set traps.

Dominick is about as adept at creating offensive openings as he is at creating counter-punching opportunities. As shown earlier, rushing against Cruz may end in disaster. The threat of the counter strike along with Cruz's motion induce hesitation in the opponent because it's hard to tell what he will do next. He forces you to wait even more with his constant feints which are easy to miss when you're not the fighter being forced to react to them. The Bantamweight Champ will sometimes feint to throw off his opponents as in the left panels below. A low feint in panel 1 before hopping off to the other side of his opponent as shown in the 2nd panel may already leave a fighter guessing: Is he attacking? Looking to move? Before they can come up with an answer, he feints in panel 3, before hopping out of range. He then steps in with a low feint before attacking high with the jab and safely exiting to his own left.

In a very insightful Heavy Handspodcast interview with Dominick Cruz, the champion states that “A lot of my defense is mistaken for running when all I'm doing is steering...When you're steering somebody, you're actually moving them into your offense while they're being offensive. I'm killing two birds with one stone because while I'm being offensive also being defensive... and it creates havoc for the person you're fighting.” The finish in this fight came once Dominick was able to induce a fatal chase. His jab with his back along the fence caused Mizugaki to reactively fire a combination - Cruz slips the jab and moves right to avoid Mizugaki's right hand in the first two panels below. Cruz escapes any attempts to close him off along the fence, stops as if he's about to attack. Mizugaki reacts to the false strike upstairs in panel 4, but is then easily taken down and thrown into a position where Cruz gets side mount. From there, Cruz controls him and is able to pound Mizugaki into unconsciousness in the transitionary period where Mizugaki attempts to stand back up to his feet. The fight ends in 61 seconds of the very first round.

Producing a knockout against a sturdy fighter can come from a variety of ways, but is in itself an impressive accomplishment. Cody Garbrandt produced his finish by backing Mizugaki to the fence, landing a powerful blow to stagger him, then followed up. Dominick Cruz produced the finish by putting himself in to “dangerous” positions and steering his opponent into traps – Cruz put himself to the fence in order to secure a powerful position which enabled a succession of blows to force the bout to an end. Watch out for the second part of this breakdown in the next few days to get a better sense of the sorts of tools each fighter uses and the potential flow of the fight.