We Are Proud Whiny Babies, And We Will Protest
Odyssey

We Are Proud Whiny Babies, And We Will Protest

We march to show the world that we are discontent and we will not be quiet, that we will not let Donald Trump get away with putting his hateful rhetoric into action without a fight. 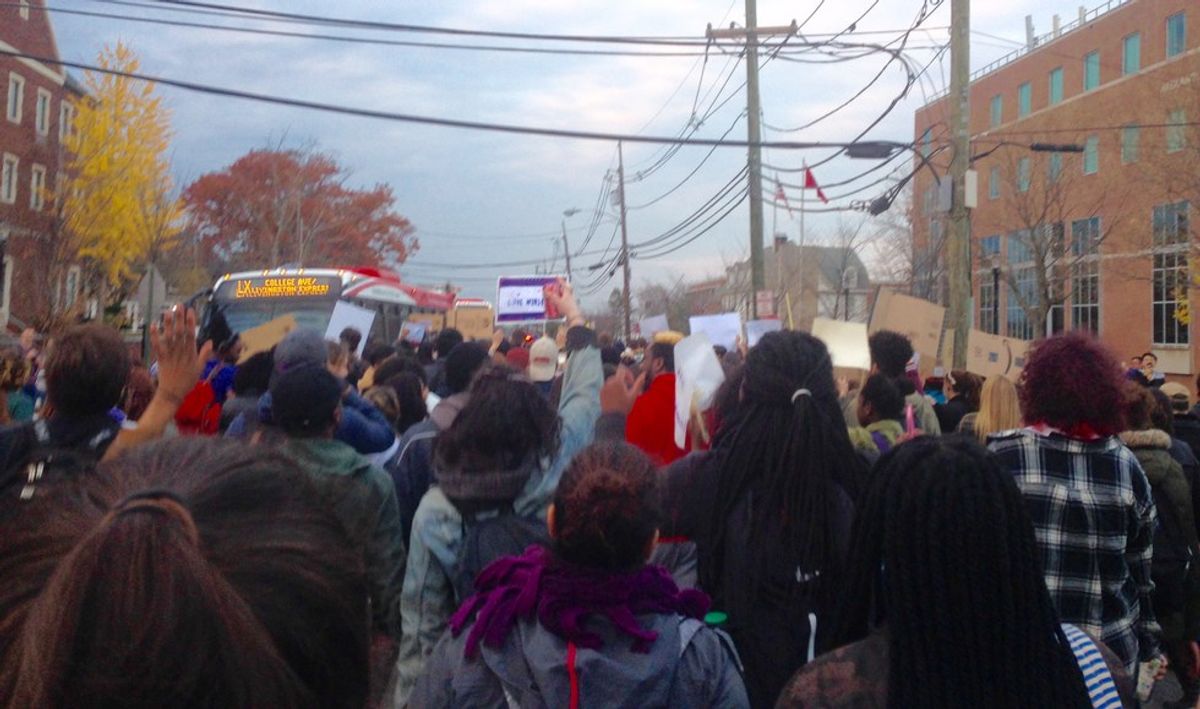 This election was not a normal one. People were not just disappointed as would be expected after an election. Rather, people were genuinely afraid. Many—myself included—had not thought that an American election could incite such a level of deep-rooted fear, until last week.

This fear is well-founded: countless hate crimes have occurred since last week and we are now seeing the preliminary steps for actual action, with Trump's plans for making all Muslims register themselves and building a border wall as just two examples.

There have been post-election protests all over the country from major cities to college campuses, and I am proud to say that list includes Rutgers University.

At 3 p.m. yesterday, Rutgers students held a walk-out and marched until 5:30 p.m. from the Voorhees Mall on College Avenue to the Field of Dreams on Douglass, aiming to support a sanctuary campus. CNN and WABC live-streamed parts of the march, and thousands across the country watched.

Marching alongside my fellow students and faculty was not only an honor, but also unquantifiably re-energizing.

There are many other people, however, who do not feel the same way and oppose these nation-wide protests. The most common argument is that the protests are useless—and even idiotic—since Trump already won. The issue is that trying to reverse Trump's win was never our core goal. Another all-too-common reaction is to write us off as "whiny babies" or "coddled millennials."

If you are one of those people who does not see the point of these demonstrations, this article is my response to you. All I ask is that you try to understand, because our nation cannot move forward without that stepping stone of mutual understanding. Some such opposing perspectives were voiced on CNN's Facebook coverage of our march:

These are only a few such comments, and the issue here is a fundamental misunderstanding: this IS us coming to terms with reality, and fighting to make sure that that reality is a world where everyone has basic human rights. This IS us standing behind and supporting our country—the millions and millions of Americans who feel legitimately unsafe and who have been attacked both rhetorically and physically by Trump and his supporters.

And while we are it, this is also one of our basic Constitutional rights, as another user pointed out on the post:

The biggest misunderstanding of all, however, lies in regard to the very purpose of the protests. They assume that our purpose is to stop Trump from becoming president, when in reality, the purpose of these protests is not to overthrow Trump's textbook-defined fair election or even necessarily change the outcome. In reality, our marches are about so much more than that.

We march because this is what democracy looks like and because doing so is our right—and frankly, our duty.

We march to show that we are a Sanctuary Campus and will protect all of the people in it.

We march to show solidarity with our fellow marginalized peers—and fellow human beings nationwide and worldwide—and to show them that we will stand with them.

We march to show that this pussy does grab back, that Black Lives Matter, that Muslims are Americans, that immigrants are safe with us, that we will not let those with disabilities be mocked, that we care about the LGBTQIA+ community because LOVE TRUMPS HATE, and that we will fight for and with every other identity that Trump has attacked and thrown his bigotry upon.

We march for hope, and for unity.

We march for that black toddler who I saw watching us in awe with his grandmother from their window, and we march for the two Muslim women in hijabs with a little girl in their stroller who were nearly in tears as they waved to us while we marched past them.

Those were the most meaningful moments of the entire demonstration to me.

We march to give those children hope and to show them that not all of this country will abandon them.

We will not. We will stand by them, and by each other.

So, to anyone who has opposed any of the protests nationwide—you have got it wrong when you say that we should sit down and shut up because Trump is going to be president and we just need to deal with that. We are dealing with it, and this is how. Before you shame those who protest, realize that our core objective is not to remove Trump; it's solidarity.

We will not have failed if Trump takes office. If we showed any American that hatred and fear-mongering will not be accepted without a fight, if we made a single member of a marginalized group feel any less afraid, if we sparked awe in the eyes and hope in the hearts of that little black boy and Muslim girl, then we were successful. These protests are about solidarity and our duty to fight for what we know is right, and we will not stop.

As for how a number of people have called us "whiny babies," change throughout the history of not only America but the world has been built on protest and fighting for what is right. If every person who has protested throughout history is a "whiny baby"—Martin Luther King Jr. and the Civil Rights movement, Tank Man, the women's suffrage movement, Mohammed Bouazizi's self-immolation and the Arab Spring uprising, Mahatma Gandhi and the independence movement—then we are proud to be babies, too.