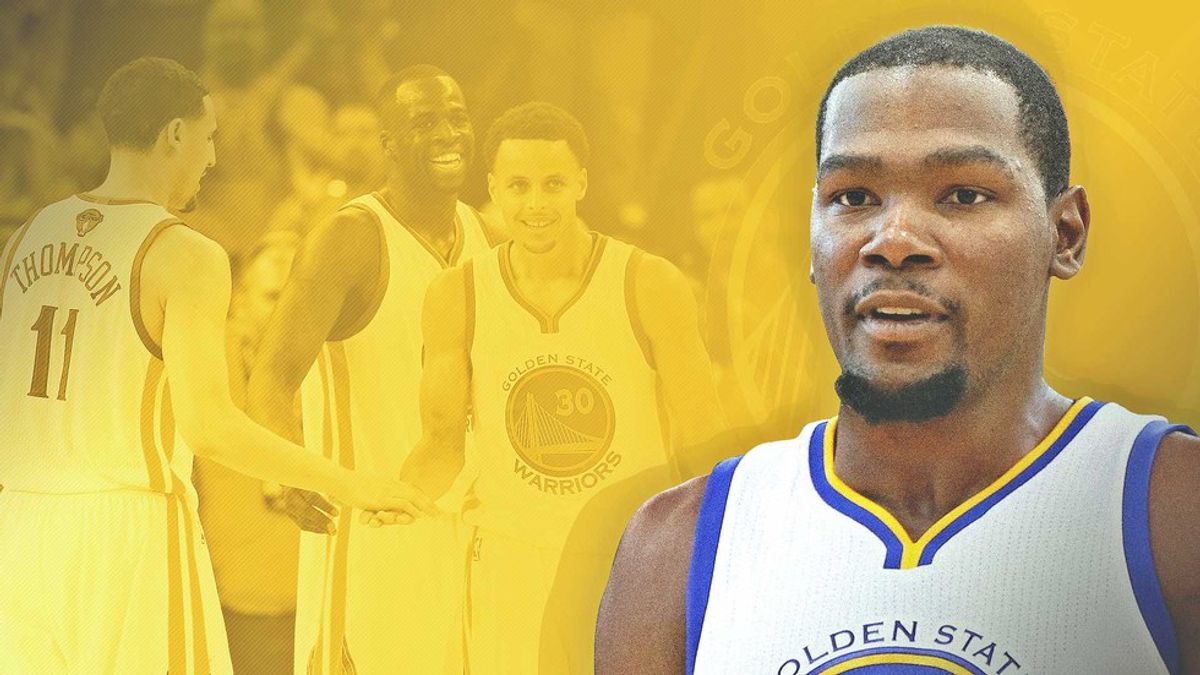 Last week, Kevin Durant shocked the sports world when he announced that he was going to take his talents to the Bay Area and play for the Golden State Warriors next season. Just a few days prior, a longtime friend of Durant ascertained sports insiders that he would most likely stay in Oklahoma City. But if this year's season is any indicator of the what off-season was going to be like, it's no surprise that the unexpected happened. Not only did he leave the only team he's ever played for, but he signed with the team that BEAT him in the playoffs this year. Another key point is that Oklahoma City was ONE game away from advancing to the Finals. What's that saying? "If you can't beat them, join them." Cue the burning of jerseys, the shoes attached to fireworks and the ripping of fathead posters. As one era finishes, another one begins.

Now, Durant is joining what could be the most offensively jam packed super group of players since LeBron James signed with the Miami Heat back in 2010. Durant's decision was a business decision and a personal one, I'm sure. However, I'm going to focus on the personal side. Durant previously remarked that the world revolves around championships, and with his future hanging on the balance, he went with a new.

I am a believer that people enjoy traveling, going on vacations, retreats, and learning new things because traveling allows people to escape the routine and the comfortable. Comfort is nice.

How I would define comfort: Getting paid $85,000 a year while sitting down and watching television.

Talk about an offer you cannot refuse. If someone offered you that kind of compensation for that sort of work, would you do it? Ah, you drive a hard bargain. Let's make it $100,000. However, there's one condition: You have to stay in the same town, and house. No traveling.

It might be nice in the beginning, but then one would want a change of scenery, a change of pace - a challenge. Look around - humans have moved into every inhabitable space on the face of the planet. We take boredom very seriously and "exploration" is almost synonymous with being human.

Durant understood a fundamental truth to growth. People grow when they get out of out of their comfort zone. Comedians battle stage fright and criticism. Athletes battle arduous game schedules and injuries. Everyone battles the death of loved ones, etc.

Durant has never played the role of the villain, and having walked away from thousands - no, millions of fans, he will have his chance. He made a decision that went against the grain. He welcomed conflict. It's akin to telling off your boss who's mistreated you for years and quitting your job for one with a better culture, and better pay. It's like leaving an abusive relationship and embarking on a journey of self-discovery by traveling the world, or moving to a new city. It's about change. He will explore a new community. He will don a new jersey. He will play with new teammates, and he will have to overcome the turmoils of returning to a city that was never ready to say goodbye.

No doubt that the Warriors are going to get orders for season tickets earlier than usual. Durant made a bold move; a high risk, high reward decision. Teammates have said that he's impulsive and impressionable. But if there's one thing I've learned, is this: it's empowering to make big life decisions on our own. Life transitions are what make life interesting. Everything is new to a kid, that's why they are so impressionable. As people get older they get scared of failing, and making big changes.

Did Durant make the right decision? Who knows. But his decision will certainly open him up to a whole new world of experiences and challenges. Canadian writer Zan Perrion wrote, "When you are faced with a decision that you have to make between two paths - always choose the one that will provide you with the best memories."