Jump Rope: It Is A Sport
Odyssey

Jump Rope: It Is A Sport

A Commentary on Jump Rope as a Sport 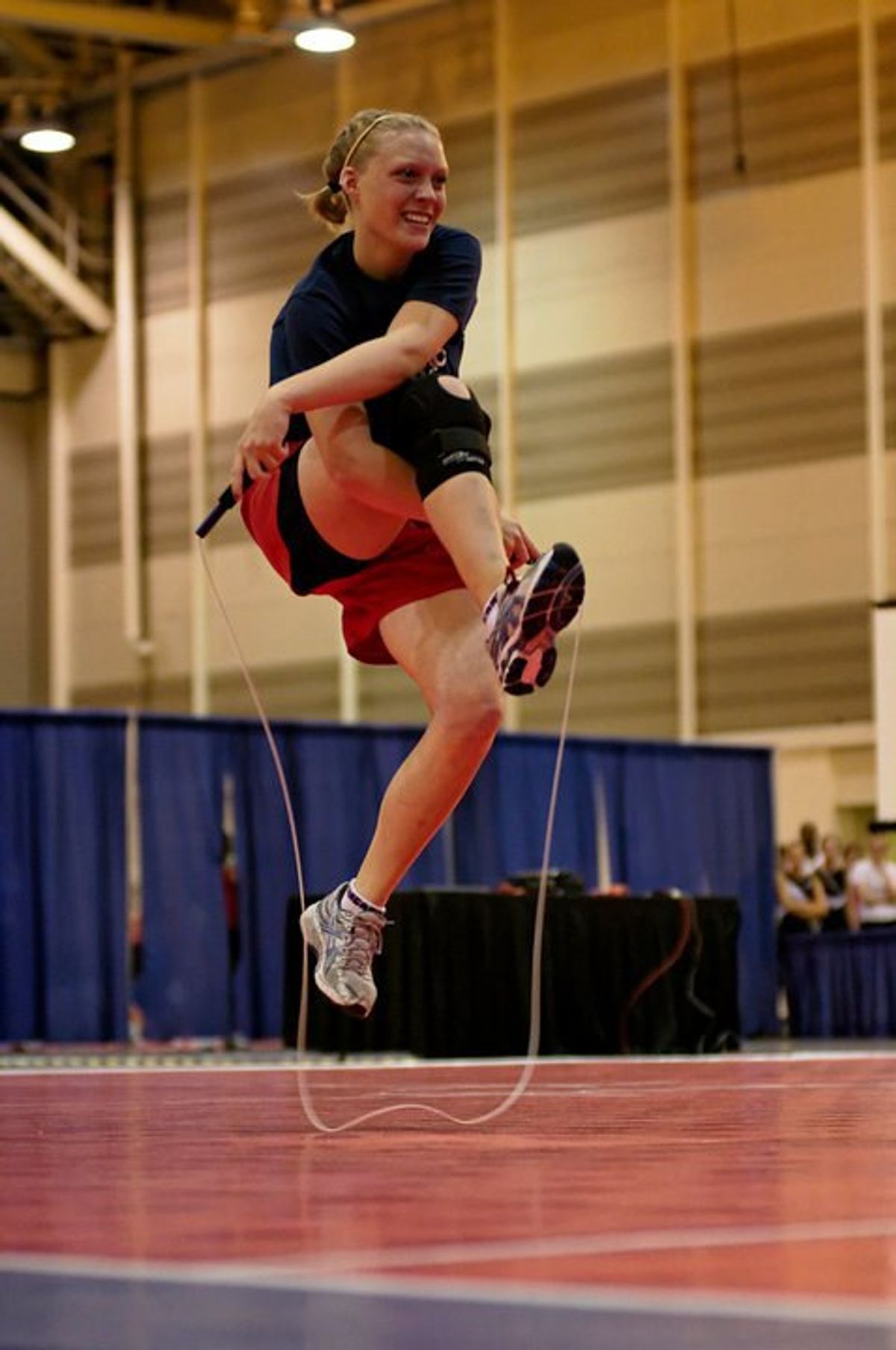 Jump rope, although it used to be associated with fun and games on the playground, is now a growing sport that is extremely competitive and to some, may be considered the single most comprehensive and beneficial form of exercise a person can do.

Physically, jump rope is a strenuous sport that requires a lot of skill, endurance, and talent.

Not only is jumping rope a healthy lifestyle to lead, but also it is fun. According to the Kangaroo Kids Precession Jump Rope Team in Howard County, Md., the sport of jump rope quickly improves fitness levels, builds self-esteem, and –most importantly- demonstrates that exercise can be fun and enjoyable. Not to mention that being involved in this sport offers a lot of amazing opportunities, such as traveling and being featured on various televisions shows to promote physical fitness. Some jump rope members have had opportunities to jump for Cirque De Soleil, NFL and NBA half time shows, music videos, and commercials. Members of both USA Jump Rope and World Jump Rope have been featured on the Ellen Show, the Martha Stewart show, the Bonnie Hunt Show, Late Night with David Letterman, “Glee,” the Tony Danza Show, and more.

While this sport is fun, there are many serious aspects that are found in the competition atmosphere. There are competition two main competitions that are known throughout the jump rope community both nationally and internationally: Nationals and World Jump Rope. So far, Team USA has competed in Australia, Canada, South Africa, Europe, and the British-Virgin Islands.

According to World Jump Rope founders Amy Canady and Carmen Simpson, World Jump Rope is “dedicated to providing opportunities for the amazing athletes our sport, speaking creatively and innovation, and creating world-class events for the world of Jump Rope.”

There are various events involved in a single week’s worth of competition. Single rope includes all speed and power events, freestyle: singles, pairs, and wheel. The most common word associated with jump rope is, of course, Double Dutch, which includes all speed and power events, and freestyles: singles (three people), pairs (four people), and triad (five people). There are also divisions of competition based on age or years of experience. For example, the novice division is for new competitors, while the junior division is all competitors of the age 14 or younger, and the senior division is for ages 17 and younger. Lastly, there is the group show event where an entire team performs all the elements in jump rope: single rope, double dutch, and long rope within a set time constraint. There are also all male, all female, or mixed (male and female) gender divisions within these age divisions.

All in all, while jump rope may easily be made fun of or mocked, it is a continuously growing sport that becomes a serious sport for those involved in competitions and performing. Jump Rope is a REAL sport because it requires an incredible amount of strength and conditioning that is also applicable to any other sport. Look for jump rope in July 2014 on World Jump Rope’s live stream on worldjumprope.org.

“Jump rope is good for everybody! Provides mental fitness as well, good for you educationally increases IQ due to bilateral coordination, you read faster, you do math faster, so when you are younger and doing anything bilateral you do it with your arms and legs simultaneously and you build more neurotransmitters, which makes your mental capacity larger.

“Not only becoming smarter but also developing leadership and group management. Many sports use jump rope as a way of improving their own fitness and sport.”

Coaches are not PE Teachers, we don’t get paid, my daughter has Cerebral Palsy, and doctors told us that Alex is mentally retarded and would never read or walk. When she started jump rope she was 9 and could hardly control her own muscles, her IQ went 79-114, she reads she writes, and she even went to a university! Comet Skippers take in special needs children every year, but the bottom line is that we are not worried about winning the medals, but we want to make leaders and it is a place, with proper coaching and training, “we’re only as good as our weakest jumper.” That’s why we have older athletes and coaches willing to actively work with all athletes.

It helps develop muscle tone, helps those with sensory integration, a lot of physical benefits that help build an athlete in another sport and those who are physically challenged, and even children who may have trouble focusing.