George Karl: Don't Judge A Book By Its Controversy
Odyssey

George Karl: Don't Judge A Book By Its Controversy

'Furious George' is much more than just controversial. 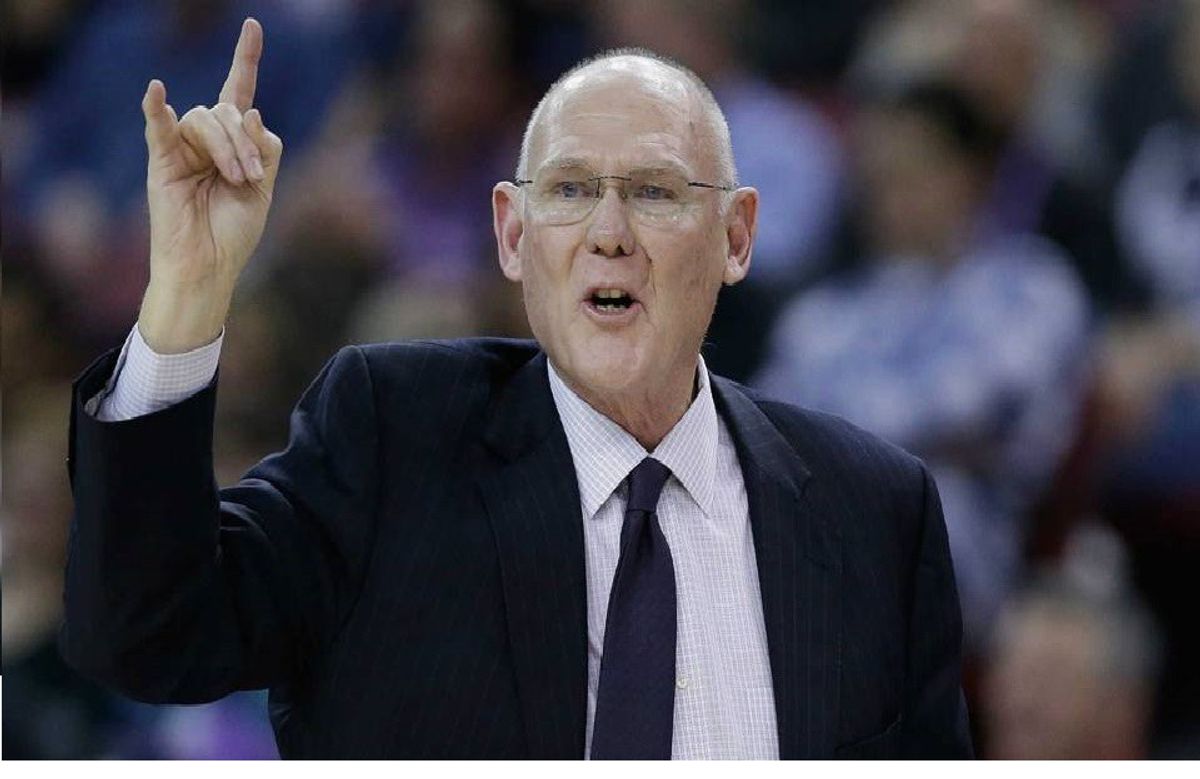 Too often, misguided words uttered in a small portion of a piece of work blind us to the central message of the work as a whole. George Karl’s recent book, Furious George: My Forty Years Surviving NBA Divas, Clueless GMs, and Poor Shot Selection, everyone in the NBA can agree on one thing: George Karl is wrong, crazy, and possibly bigoted.

In particular, his quote regarding two of his players on the Denver Nuggets: “Kenyon and Carmelo carried two big burdens: all that money, and no father to show them how to act like a man,” has drawn him widespread condemnation across the league, and rightfully so. His conspiracy theories regarding how some playoff series he has coached has also drawn speculation that maybe Karl has actually gone crazy.

However, these examples shouldn’t invalidate everything Karl has to say. As we’ve seen with the rallies and words of our now President Trump, our concentration and focus on condemnation has blinded us to what may have attracted so many voters to him in the first place.

In "Furious George", the keynote that a reader takes away is, yes, the NBA is a business. Karl cites Game 7 of the 1993 Western Conference Finals as an example that the league can be unfair. The game between Karl’s Seattle SuperSonics and the Phoenix Suns, led by Charles Barkley, would decide who would ultimately battle the Chicago Bulls in the Finals. The Suns shot 64 free throws, compared to the Sonics’ 36. Barkley would shoot 22. According to Karl, the most likely conclusion is that the league would benefit more financially from having the league MVP, Barkley, in the finals, as opposed to a team of nobodies that Karl coached. No one can dispute the discrepancy in the number of free throws shot by both teams, and this led me to wonder: does the NBA value the business or the game more?

We can shrug off this case all we want, but the 2002 Western Conference Finals between the Sacramento Kings and Los Angeles Lakers, as well as the 2001 Eastern Conference Finals between the Milwaukee Bucks and Philadelphia 76ers, were also horribly officiated series that led to the more superstar-loaded and bigger market teams making the Finals in seven games. As fans, it is our responsibility to not neglect that the NBA’s business interests can sometimes interfere with the game.

In addition, one thing to take away from the book is that the human side to Karl. Seeing the perspective of a coach, I realize that sometimes, as a student-athlete myself, I have unrealistic expectations for my coaches, and don’t understand that their intentions are always in my best interest. While Karl’s book can be seen as a “hit piece” against “divas” in the NBA such as Carmelo, Gary Payton, and DeMarcus Cousins, we don’t see the touching and difficult parts of Karl’s career as a coach.

George Karl starts off one chapter by saying “I coached a game drunk once.” Immediately, I shook my head and judged Karl for this decision. No wonder people are talking so much shit about him, I thought. Is this dude serious? However, he then goes into the details. In Karl’s tenure at Real Madrid in Spain, his star player, Fernando Martin Espina, had died in a car accident in the middle of the 1989 season. After Fernando’s burial, the team went out to a restaurant, drank, and told stories about Fernando, even though they had a game later that night. During the game, the team retired Fernando’s jersey and came back from a 19 point deficit to take a 15 point lead. At the amazing and emotional spectacle, the crowd chanted in Spanish: “Fernando is here! Fernando is here!” I realized then that my rush to judgment was wrong, and felt satisfyingly fooled.

In addition, Karl details two of the most heart-wrenching moments of his life. First, in the spring of 2005, he was diagnosed with cancer. Six months later, his son, Coby Karl, was diagnosed with thyroid cancer. “I wondered if I’d done something wrong. Had I contributed some bad DNA? Had it been his nutrition or, somehow mine? I only knew I wanted to snatch away Coby’s cancer and take it myself.” In this emotional part of the book, I couldn’t help but share in George Karl’s pain.

The point of this article is to convey that although offensive and downright hurtful words were written in this book, it shouldn’t disqualify it as a memoir as a whole. For anyone that wants to learn about a coach’s experience in the NBA, the business’s inner dealings, or just the poignant journey of Karl himself, this book is a must-read. As a 65-year-old man who has gone through cancer, we can understand this book as an accomplished coach's attempt to look back and gain insight on his career.

In the words of the Denver Post's Christopher Dempsey: "'Furious George' is controversial, but is much more as well."