A Final Plea: Trump Ideology Is The Greatest Domestic Threat
Odyssey
CurrentlySwoonLifestyleHealth & WellnessStudent LifeContent InspirationEntertainmentPolitics and ActivismSportsAdulting
About usAdvertiseTermsPrivacyDMCAContact us
® 2023 ODYSSEY
Welcome back
Sign in to comment to your favorite stories, participate in your community and interact with your friends
or
LOG IN WITH FACEBOOK
No account? Create one
Start writing a post
Politics

A Final Plea: Trump Ideology Is The Greatest Domestic Threat

If we descend into chaos after November 8th, it's our own damn fault. 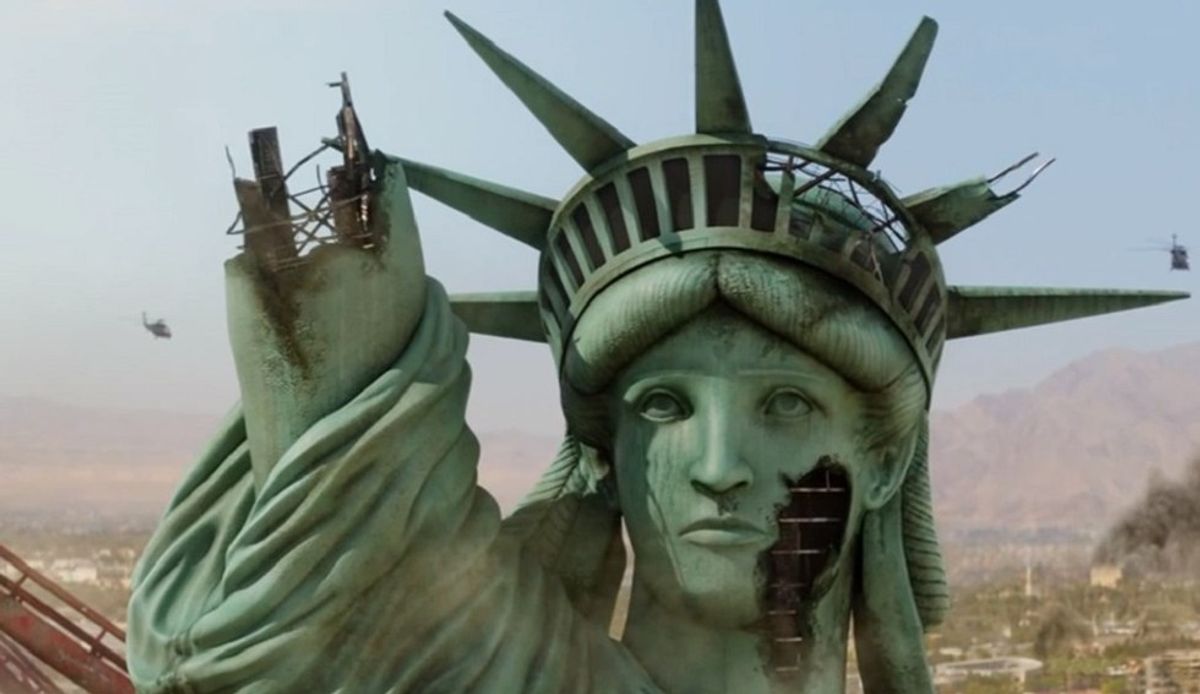 This is it. This is what it’s all been leading up to - the week that we’ve all been anxiously waiting for. The United States Presidential Election. The past year has been divisive, to say the least. Families refuse to talk politics, lest a civil war ensue at the dinner table. Others just aren’t talking at all. Life-long friendships are being torn apart, relationships are strained, and hateful Facebook ideological stand-offs are more common than the cats, memes, and baby pictures that used to entertain the masses.

This isn’t just a normal election cycle, where democrats and republicans can agree to disagree and quietly roll their eyes at the holiday dinner table when their drunk uncle starts ranting. There’s so much hate, name-calling, and bitterness on both sides of the political alignment spectrum - and, honestly, I’m just trying to figure out how we got here.

Look, I realize that most people aren’t happy with either candidate - trust me, I’m still hoping that Bernie will come flying in on a unicorn-pegasus and bestow equality and democratic socialism upon us. But I’d also be fine with Kasich being a strong contender. And you’ll never hear me say that Hillary is squeaky-clean - but that’s a topic for another article, and hopefully I’ll never have to write about why a candidate is good or bad again. I’m tired. So, so tired. So, in this article, I’m going to announce my final plea to the undecided or Trump-leaning voter. I know now that it’s too late to convince the Trumpers and Trumpettes who burn down Black churches in the name of their candidate to vote for literally anyone else, but if this is my platform to try and warn against what could be a very scary future for not only the US, but the world, I’m going to exercise my First Amendment right, because it seems as though I need to remind myself sometimes why America is already great.

This summer alone, I witnessed countless examples of the most overt xenophobia you could imagine - most of these occurrences happened on the train into New York City, one of the most diverse and culturally rich cities in the world. Most of the instigators (the drunken ones who were shouting slurs and "get the hell out of my country" to US citizens who were assumed to be foreigners because they dressed differently or were just a tad too dark to be "real Americans") were also mentioning Donald Trump in their conflicts. A major part of Donald Trump’s presidential campaign centers on immigration blocks and mass-deportations. Listen, I’m all for doing things the right and legal way, but sometimes you just have to get over your privilege as someone who was born into a world superpower with opportunities calling from every corner. Yes, you might come from a poor neighborhood, or if you’re a person of color, the odds might be stacked against you, despite efforts to try and erase centuries of wrongdoing. But has your family been dismantled by drone strikes? Have you been forced out of your home and country with nowhere else to go? Have you worked 12-hour days, 7 days a week, and still not been able to provide the most basic necessities to your family, living in a shanty?

I bet if you did, and a nation of prosperity had been advertising hope and promising to take your tired and your poor since its conception 300 years ago, you’d want to go there too. And, sometimes, you just don’t have the time necessary to do it the right way without losing everything - have you ever thought about how much time and how many resources it actually requires to become an American citizen? It takes a lot more than it did when your Irish and German and Italian ancestors sailed into Ellis Island - and let’s take a second to remember that this nation is built on the backs of immigrants (and let’s not forget the genocide we committed against the Native Americans and how we still can't seem to treat them with respect - I'm looking at you, DAPL).

Those Irish and Italian ancestors I was talking about before were given loads of difficulty when they first came here - no one wanted them here, just as you don't want Mexicans and Middle Eastern folk here now. When did we decide that we are no longer a country of mixing cultures and opportunity? We might as well send the Statue of Liberty face-first into the Hudson, because this ideology certainly doesn't deserve that monument of peace and welcoming. Yes, national security is important - but is it more important than regarding the ideals we were founded upon, that value human life over hate?

Another issue - one that has affected me personally - is the idea that Donald Trump and so many of his supporters are so fucking okay with sexual assault. The same fathers who are the ones fighting to keep their right to own a gun to prevent their daughters from being sexually assaulted are also the people who are excusing Trump's "grab them by the pussy" comment, and wish to overlook the 12 sexual assault charges the candidate is currently facing. It's disheartening, to say the least, to see the ones who are meant to be your protectors and sources of comfort saying to "get over it" or invalidating these traumatizing experiences.

This summer, I was sexually assaulted by a middle-aged man in the workplace. I cannot begin to describe how relieved and lucky I feel that I was not a victim of a completed rape. But at the same time, I'm horrified by the fact that it was considered okay because I was not penetrated. He may not have gotten that far, but he still pinned me to a wall in a private back room where no one could hear or see us. He still grabbed me by the shoulder and waist to make his dominance known. He still grabbed my thigh and started snaking his hand closer to Trump's grabbing place of choice. He still sucked on my neck to the point of me rubbing my neck raw in the shower, leaving an irritated red mark for a week because of how horribly I wanted every trace of him off of me. He still didn't let me go when I said no.

And my mother, a victim herself, said "oh get over it, it wasn't that bad. It was just a kiss, right?" as she joked about it to relieve the tension that night, when I left my shift without a word because I didn't want to face my boss, hoping my mom would be able to comfort me and remind me that it wasn't my fault and that what he did was unacceptable.

When I did tell my boss about the situation via phone that night, my perpetrator was fired immediately, and while I cannot begin to express how thankful and relieved I am about the action they took to protect me, I still feel horrible that I was the reason someone wouldn't be able to provide dinner for his family that week. And the fact that I still feel like that makes me want to vomit. We've been conditioned to think that rape is expected and if you get out of life without experiencing it, you're lucky. And if you're not lucky, you probably were at least part of the reason it happened.

Trump is the most public face of this ideology, and, if he is elected, the fire that he has ignited in his supporters will continue to threaten groups that are already so marginalized and overlooked by our society. We are becoming our own greatest domestic threat - not ISIS, not Mexicans - us. We are devaluing our own people and those who wish to be a part of us. If America descends into chaos after November 8th, it's our own damn fault.