What happens in Texas, stays in Texas 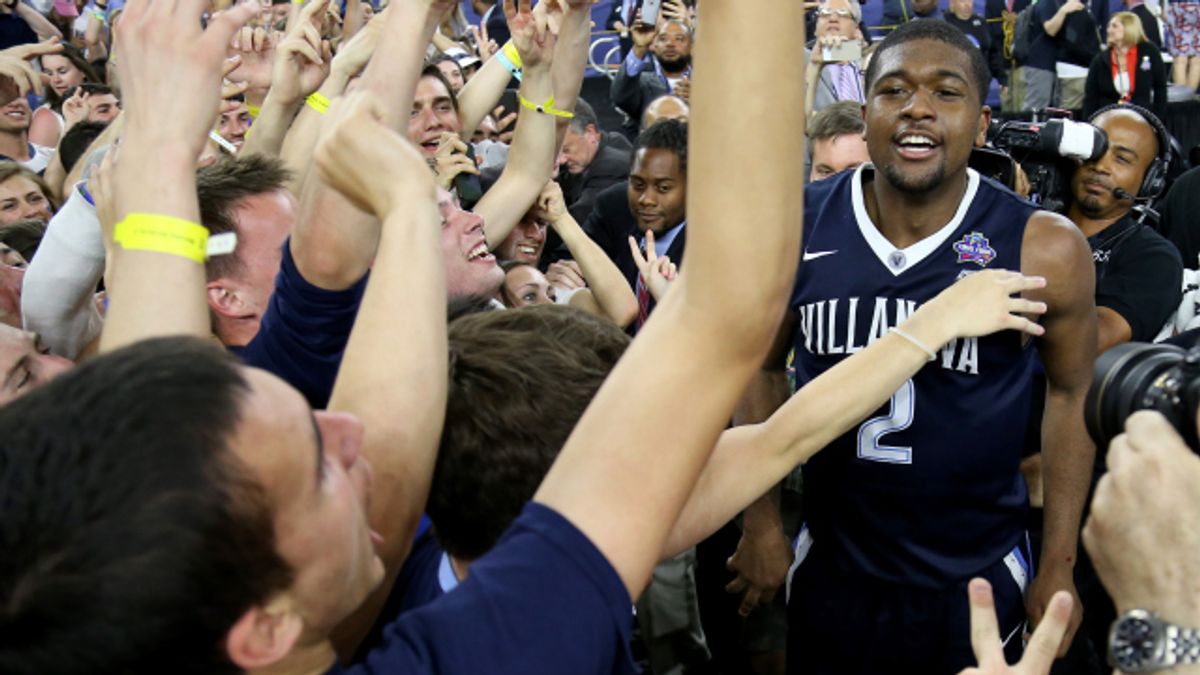 Surreal. I sit here on the plane headed back home to Villanova, Pennsylvania from Houston. One year ago I pain staked over choosing where to spend the next four years, but ultimately decided that I wanted to be part of a community, to join a team. One week ago I sat in class quite literally squealing after having bought my plane tickets to see my team play in the Final Four. 24 hours ago I stood outside NRG Stadium in the blazing sun full of fear, anxiety, nerves, and a whole lot of dehydration waiting to see my team play for the national title. 12 hours ago I ran through the streets of a city I knew nothing about as of a few short days ago, surrounded by my fellow Villanovans celebrating the victory of our team, the best team in the country. Surreal.

There’s something special about Villanova basketball. Maybe it’s the fact that I sat in my dorm many times early in the season wondering what exactly would come out of this team. I would be lying if I said that an early loss in the tournament never crossed my mind. Yet, somehow they ended up shooting 72% from the field in the national semifinals. Maybe it’s the fact that there is no star. The eighth man could outscore a starter on any given night. There is no one household name on the team. (well, there wasn’t until about 11:30 EST last night) Maybe it’s the fact that these guys aren’t larger than life figures on campus. I may not know them personally, but we have plenty of mutual friends. They sit in class along side the rest of us, not writing 159 word papers about Rosa Parks (UNC- that worked out real well for you.) I could turn around at my sorority formal and find them dancing like lunatics along with us narps. There’s something special about Villanova basketball.

It’s a team full of selfless players. Players that offer to wipe up their own sweat after a nasty fall at the end of a really close game, instead of having the boy do it so they can make sure none of their teammates fall. Players who are seniors, playing in their potentially last basketball game ever and have dreamed about hitting the game winner at the national championship literally their entire lives, but choose to pass it up to their teammate, who had a better shot than them. It’s a team full of selfless players.

We don’t win championships often. It’s been a very long 31 years since our last, and only, national title. But that’s what makes this so great, and so special. We may not be in the championship game again in the next thirty years, let alone during my tenure as a student. And that’s ok. Because quite frankly we do us. Even after Coach Wright’s six straight early exits from the tournament, he was still the most popular figure on our campus. That wouldn’t happen at powerhouse schools who make it to the Final Four once every couple of years. Jay Wright is not just the coach of the Villanova basketball team. He is Villanova. We all are Villanova. And that is exactly why I had to go to Houston. To see our team contend for, and maybe even potentially win, the national title. Like I said, we don’t win championships often.

So, this weekend, I reminded myself more times than I can count that this experience is once in a lifetime one. As my Uber charges racked up and I saw thousands of social media posts from back on campus, I reminded myself that I may never live to watch, in person, our team win a national championship again. I met alumni after alumni, from Class of ’83 or ’92 or ’10 or ’76 who all could not resist to take off work and make the trip to Houston because this was special. Time and time again, when they heard I was a freshman, they responded in agony claiming they would kill to be back in my shoes. But as one alumni put it, “You are Villanova just as much as I am. We are Villanova and we’re here- the biggest stage in the basketball world” And he’s right I was there, I watched Marcus Paige hit that seemingly impossible game-tying three with 4.7 seconds left with my own two eyes. I prayed for a miracle in that stadium, along with Shaq, and Michael Jordan (who I have a feeling was pulling for the other team). I felt the feelings of despair and hope and distress and excitement on repeat. I sat alongside 74,239 of my closest friends in one of the best sporting events of all time. We watched a miracle unfold in front of our eyes. After I’m married and my kids are born, I’m going to have a hard time not telling people that the greatest moment of my life was watching Kris Jenkins hit that three as time expired to win the national championship. Or when I ran up to the president of the university and gave him the biggest hug I could muster. So I reminded myself more times than I can count this weekend, that this experience is once in a lifetime.

At orientation, during my first days on campus, when Villanova might as well have been a foreign country Professor Jackman told our freshman class, “Tonight there are two kinds of people in this world. People that are at Villanova and people that wish they were at Villanova.” I didn’t understand how one little campus on the Main Line of Philadelphia could mean so much to so many people. I get it now. It’s more than just classroom buildings and dorms and dining halls and basketball stadiums. Villanova becomes a part of you that never quite leaves no matter where you go: Houston, London, Australia. We become and are Villanova. And we just happen to be the best basketball team in America.

Oh, and by the way Houston, we have absolutely no problems.