The weird, wacky world of dating in the '50s 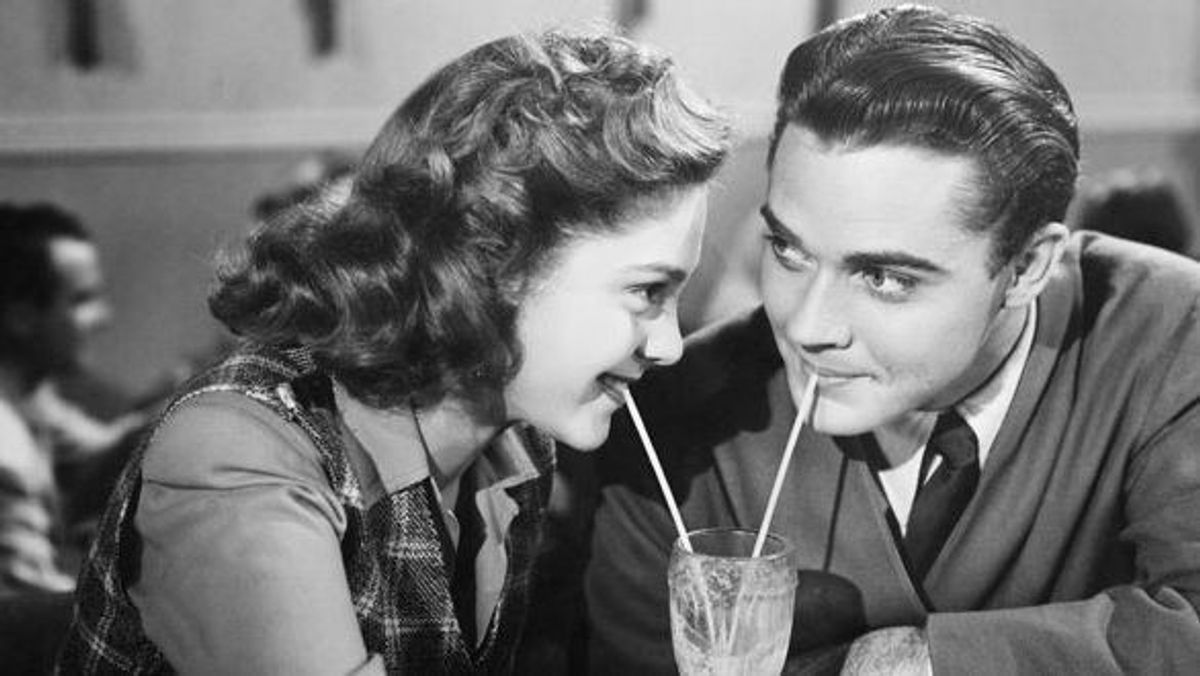 Ah, the 1950s. An idealic, postwar time of America where if you were white and middle class, your life was pretty great. America had finally become the dominant superpower, the GI Bill and Housing Bill had created our suburbs, and our grandparents, children of the Greatest Generation, were free to roam their neighborhoods, make new friends and find a nice girl to settle down with. But dating in the 1950s was a serious matter, the rules were very different from today. So, in case you ever think that you were born in the "wrong generation," here are a few ways that dating in the 1950s might look a trip to the Twilight Zone to you today.

Unlike the personal dinner and movie dates of today, it was very common for groups of couples to go out together at this time. Group dates were actually encouraged as first dates for many suitors, as it relieved the tension and awkwardness of the first few "romantic" times together for a couple. This was a time where community organizations like the YMCA were culturally popular, and these organizations would hold larger events (dances, hikes and shows) often, further encouraging group dating. You'd also get set up on a lot of blind dates too. The culturally appropriate thing for both teen-aged girls and boys was to be very shy when it came to dating, so very often your friends would set you up with a stranger to overcome this shyness. Today, many of the activities group dates would attend would count as "hanging out" with little romantic intentions, but the goal of these dates are the same: It gives you the ability to get to know someone you're interested in in a low-pressure environment.

2. Your parents would want you to date as many people as possible.

Yes, you heard me right: In the 1950s and '60s, casual dating was often encouraged over being in a committed relationship. The logic at the time was that the longer you were in a relationship with someone, the more likely you were to have sex. This being 1950s Christian Moral Values America, that was a big no. So, it was common for you to be going on as many first dates as Drew Barrymore, lest you be tempted to be a hormonal teenager. Oh, by the way: Teen pregnancy rates skyrocketed in the '50s, with 1958 being the highest ever recorded birthrate within 15-19 year-olds in American History. Personally, I find this fact hilarious, especially due to the complete 180 done by society on casual dating. Were people not banging on the first date? Did "Grease" lie to me?

Much like dating, it was not until after WWII that the concept of "going steady" the way we understand it really entered American popular culture. Pre-war, "going steady" was a label reserved for very serious relationships where the couple would be getting married soon, and it wasn't until the 1950s that the term stated being applied more liberally to include mutually exclusive dating. Going steady was a structured process, which many at the time thought resembled a "play marriage." Promise rings and other jewelry, as well as Letterman Jackets and other clothing of the boyfriend worn by his main squeeze signified that the two were an exclusive item. It also had the misogynistic sub-context of "ownership" over the woman, sort of a "marking" of territory, but that's another article. Going steady had several steps: After casual dating, meeting the parents, meeting the friends and basically a really awkward conversation that allotted to "Do you want to keep doing this, but like just the two of us," you would be "going steady" with some kid named Dean or Johnny or something. While I'm aware that committed relationships between two teenagers still happen today, it was the magnitude of "going steady" in the '50s that has changed. After all, this could be the guy you're going to marry. Oh, by the way.

4. Most of your dating was done in high school/early college.

The median marrying age for women in the 1950s was 19. That's kind of amazing to think about when the median marrying age today is 26. Remember how the birth rate was so high in the 50s? That's because you were married and pregnant at 20. Let that sink for a moment as you read this from your university library: this is how far society has progressed. Thanks to little factors like the Korean War, societal expectations for gender roles and the ability for one working parent households to maintain a middle-class position through factory jobs which required no college education, people were getting married and starting families pretty damn early. So that dude you dated in high school that was really into his car? That'd be your husband in 1950. I know, 2016 is awesome. Thanks Feminism.

The 1950s marked the rise of the "modern teenager": boys and girls with money to spend, their own culture and most importantly, their own cars. The '50s had cheap cars in plenty of new and exciting styles. This was the start of the "American dream" of the two garage after all. The '50s also had nowhere for unmarried couples to get it on. Teenage sex was considered a national crisis, and it was combated in the classroom with terrible videos, in the church with the perfect amount of Catholic guilt and on the streets in the form of patrol cars. So most of your intimate time spent with your partner would be in his car, affectionately called "parking." Once parents caught wind of what was going on, "parking" was allowed on "special circumstances," my favorite being the New Jersey police chief who created "parking" locations where his officers would essentially watch you to make sure it was all kosher. Basically, parents thought that teenage sex could be prevented by making it really difficult. So why was the birthrate so high? Huh grandpa? Luckily, America is much (arguably) much more sex-positive in 2016, and the modern college environment has given couples a little bit more privacy (unless your f*cking roommate never leaves). I think those videos are still used for modern sex ed though.

So the next time you hear someone say they wish they were born in the fashionable '50s, ask them how'd they like to have a full time job and a baby at 19. Happy Valentines everyone.

Caitlin Marie Grimes
University of South Florida
10111
Beyond The States