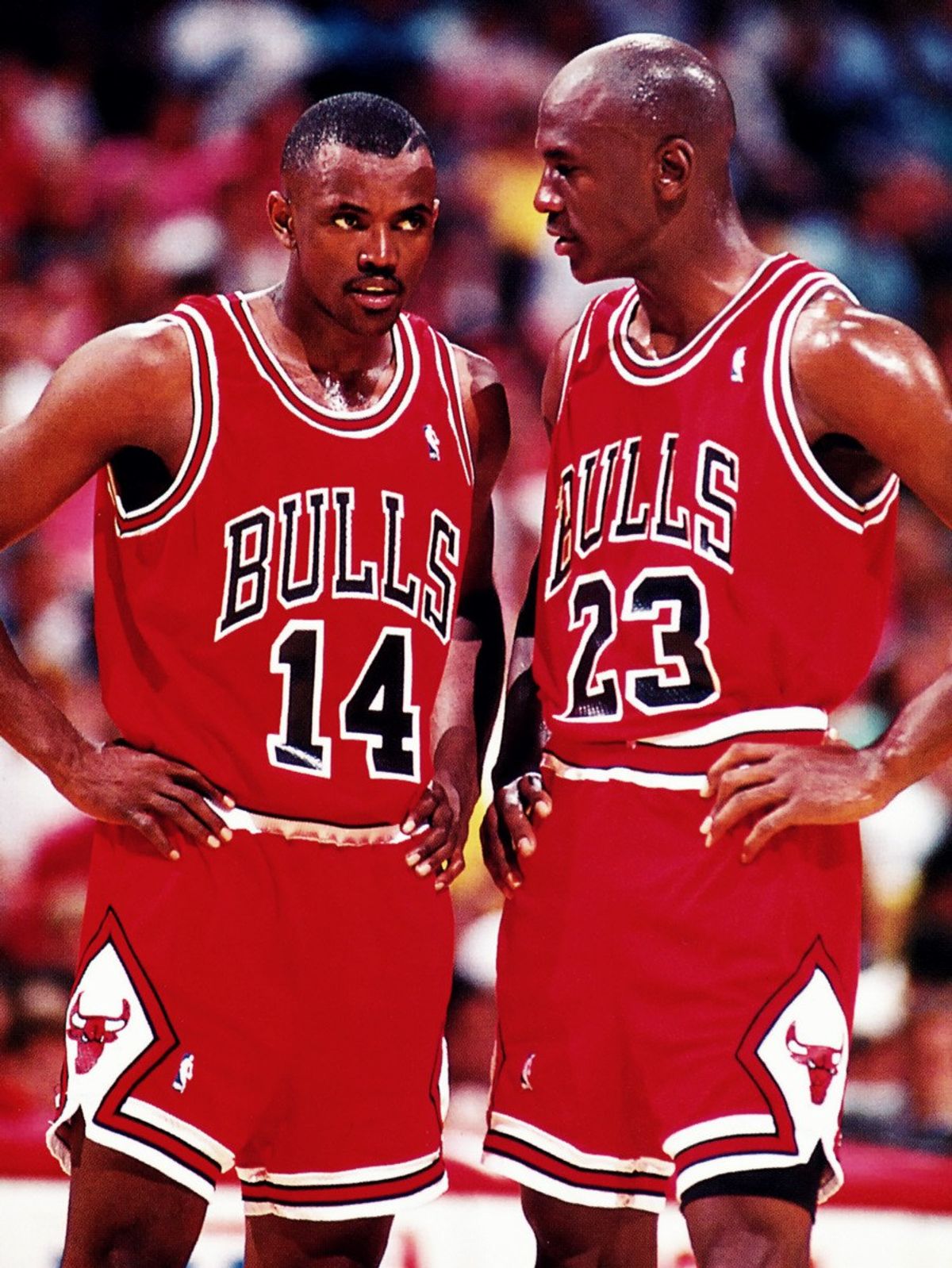 Every February, networks like ESPN and NBATV air flashbacks of the NBA's Three Point Contest from years past in preparation for the annual event. Renowned shooters like Peja Stojaković, Mark Price and Ray Allen's winning performances are often showcased, with three-time consecutive winner Larry Bird's monumental triumphs from 1985-88 getting the most attention. But there is another man, the only other to win three consecutive contests that often doesn't get the same adoration.

You will sometimes see clips of former Bulls sharpshooter Craig Hodges' epic 1991 contest championship, as he knocked down a standing record of 19 three-pointers, electrifying the crowd. Despite being tied with Bird for most wins, he technically can be considered the greatest three point contest ever, coupling his with a record-tying two second place finishes. To add to his individual accolades, Hodges was a member of the notorious 1991 and 1992 Chicago Bulls Championship squads, spearheaded by the legendary Michael Jordan. Of course this is unbeknownst to all aside from the avid basketball fan, due to Hodges decision to speak against not only the league and it's best player - but the entire country.

After four productive seasons at Long Beach State under Hall of Fame Coach Tex Winter, Hodges was selected in the third round of the 1982 NBA Draft by the San Diego Clippers. Despite limited minutes, Hodges produced decent numbers for the struggling franchise before moving on to the Milwaukee Bucks in 1984. Hodges was a tremendous help to the Playoff Contender, averaging double figures in scoring for a franchise that constantly managed to disappoint in the Eastern Conference Finals.

After a short stint with the Phoenix Suns, Hodges returned to his hometown of Illinois via a Suns trade with the Bulls in 1988. Adding a shooter to the promising Bulls was a must, a team that was struggling to get over the hump in the playoffs. Hodges was one of the league's best shooters, and his $350,000 price tag made him an affordable addition. Despite lackluster minutes, Hodges contributed off the bench, especially behind the arc, hitting a whopping 48 percent from behind the arc during the 1989-90 season. The Bulls were able to find the winning formula in 1991, defeating Magic Johnson and the Los Angeles Lakers to win the franchises first NBA Championship, and they defended their title in 1992, defeating the Portland Trail Blazers in 1992.

While most players would be riding high after winning not one but two consecutive championships, Hodges had a bigger plan, and his plan cost him. While many black athletes are criticized for not using their platform for good, Hodges took full advantage. Aside from the mandatory charitable acts that come with the contract clauses of being a professional athlete, Hodges went above and beyond for the black community, giving back to underprivileged youth and impoverished areas when the cameras weren't rolling. Meanwhile Hodges teammate Michael Jordan was facing scrutiny for remaining quiet on racial issues, not to mention the senseless murders over his Air Jordan sneakers.

The stories of Michael Jordan's bullying of players throughout his team in the NBA is well documented, from punching teammate Steve Kerr to Muggsy Bogues self-proclamation of Jordan ruining his career by taunting him. It's no secret that many players were fearful of Jordan or fearful of the power he possessed within the league. But that didn't stop Hodges from calling out Jordan as well as the NBA's other stars throughout his time in Chicago. Hodges addressed Jordan for his stance or lack thereof, on a range of topics, from black poverty to the lack of black coaches in the league, simply saying "You Are Bailing Out."

Hodges took his fight to another level when the Bulls visited former President George H.W. Bush at White House in 1992. It is expected for players to dress in their best attire to greet the President, awarding him with a special jersey commemorating the moment. But Hodges came adorning a dashiki, a cloth with West African roots symbolizing Hodges solidarity with people of color in Africa and the United States. Hodges handed the President a letter, with issues he deemed necessary to be addressed within the African-American communities of the U.S., as well as systematic and governmental concerns he had.

This didn't go over well, especially with the NBA, who immediately criticized Hodges for "embarrassing" the league and attacked his relationship with Nation of Islam leader Louis Farrakhan. Unfortunately for the 32-year-old Hodges, he was a free-agent, and according to him, pissing off the NBA and calling out Jordan resulted in him not being re-signed. The Bulls claimed the team was looking for a better defender, blaming Hodges lousy defense and age on their failure to bring him back.

Bulls Head Coach and Hodges' friend Phil Jackson spoke out on the matter in the summer of 1992, dismissing claims of foul play.

''I thought we improved ourselves there,'' said Phil Jackson, the Bulls' coach. ''I had the highest regard for Craig, though. He was a great team player, never caused any problems and I respected his views. I'm a spiritual man, and so is he. But I also found it strange that not a single team called to inquire about him. Usually, I get at least one call about a player we've decided not to sign. And yes, he couldn't play much defense, but a lot of guys in the league can't, but not many can shoot from his range, either.''

To add insult to injury, Hodges was not contacted by a single team and attempts by his agent as well as Hodges himself yielded no luck.

''I or my agent had called every team in the NBA and not one would even give me a tryout, let alone sign me," said Hodges.

There was initial interest by some franchises, which eventually subsided, as was the case with the Seattle SuperSonics. Billy McKinney, the then director of player personnel for the team, initially expressed interest, before backing out.

When confronted by Hodges, McKinney was quoted as saying ''brothers have families, if you know what I mean.''

The ever-controversial former NBA commissioner David Stern claimed that the alleged claims of Hodges being black-balled were "ridiculous".

''I was even at the White House when Craig wore the dashiki,'' he said. ''I thought it looked great, and I told him so.''

And just like that, Hodges career was over, forcing him to make a living overseas, bouncing around with clubs in Turkey, Italy and Sweden before hanging up his sneakers.

In 1996, Hodges filed a lawsuit against the NBA of $40,000,000, claiming he was blackballed by the then 29 teams over his actions and comments. After a brief stint as head coach at Chicago State University from 1994-96, Hodges disappeared from the public eye for nearly a decade.

As in the cases of many African-American freedom fighters in America, time heals, and Hodges was hired by his former coach and friend Phil Jackson to be a special assistant for the Los Angeles Lakers. For six years Hodges assisted the Lakers shooters, getting praise from forward Trevor Ariza for helping to propel his game.

In 2012, Hodges participated in the 2012 All Star Weekend in Orlando, Fl clearing the racks in the Three-Point Shootout one last time. When Jackson moved on from the Lakers to the Knicks' front office, he landed Hodges a job as an assistant for the Westchester Knicks D-League organization in 2014. In 2015, Hodges became the team's interim head coach, a position that he held for the 2015 season.

Today players are still being called out for their lack of solidarity with the African-American communities of the United States, especially with the egregious killings of people of color by police being recorded to no avail. While stars like Carmelo Anthony and LeBron James have spoken out, many have been reluctant, in fear of risking endorsements, or for lack of better words, biting the hand that feeds them. A true stickler for his beliefs, Hodges doesn't get the praise of Muhammad Ali or Kareem Abdul-Jabbar, athletes who have risked everything to stand for what they believe in.

Having the gall to stand up to the most beloved-yet-feared player of All-Time as well as the President of the United States takes courage, yet it seems like courage is only accepted in certain instances.