Not Just Another 2017 Carolina Victory Article 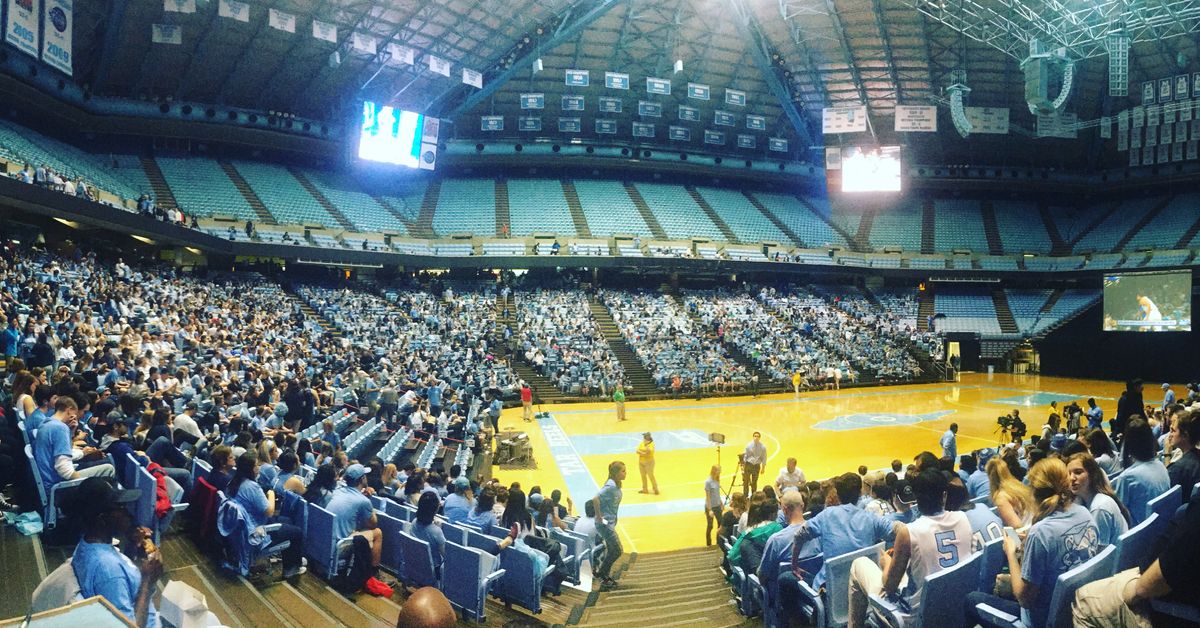 This is a hiatus week from Shroud of Darkness. Catch up from the beginning with "The Black Cloud," or with the last scene, "Quick on the Draw."

I didn't cry until they walked onstage to the tune of thousands of their Carolina family cheering and clapping.

I remember begging my parents to let me go to the Dean Dome in 2009 to watch UNC play the National Championship game against Michigan State. I had recently finalized my decision to attend UNC, and I wanted to be a part of their legacy asap. But the consensus was that I was 17 years old and bonfires, rushing Franklin Street, and being a lone 17-year-old just didn't mix (a decision that I fully support now, Mom) :)

But this time, I could make the decision to go to the Dean Dome with my friend Kristen and watch our team play Gonzaga. We clapped, shouted, covered our eyes, and felt our hearts race alongside the rest of our Carolina family. And in the end, when the clock had dropped to the last 15 seconds, we had an irreversible hope. We just knew. And we rushed the court.

For me, it might never have happened. You see...

I never wanted to go to Carolina.

Growing up a Duke fan, Carolina was the last place I wanted to attend. I wanted nothing to do with the light blue team, the weird Ramses mascot, or the Old Well. I told my mom I wasn't going. She explained that it was a great school for a great price, and we were going to at least make an informed decision. (Thanks, Mom!).

As many high school juniors do, we took college campus visits throughout my spring break. At Carolina, I made the stupid excuse that there were too many trees (among other things). On every campus we went to, we bought a shirt for posterity. As we browsed on Franklin Street, my parents told me to pick out a shirt. I said I didn't need one since I was never going there. So we bought a hat instead, much to my distaste.

It wasn't until the next time we visited that I started letting my eyes open a little wider. By this time, I was a senior in high school. I had semi-willingly applied to UNC but still refused to really consider actually going there. I had even applied and was being considered for the Morehead-Cain scholarship but found it hard to actually visualize a future in Chapel Hill.

But on that second visit, something happened. I don't know what it was...maybe the passion of the tour guide or the novelty of the Pit. The beauty of those same trees, the quad, the diversity...all I know is that when my parents and I were eating Chick-fil-a in the bottom of Lenoir for lunch and they asked me what I thought, I sheepishly said, "I'm starting to really like this place. And I could see myself here." Somehow, through everyone we encountered on campus, we could feel the love for the town, the university, and the students that everyone held. And that love, that magic, is what began making the difference.

Fast forward eight years. I've been through the multiple degree/major changes, numerous student organizations, and so many lasting friendships. I've been to a UNC-Duke game in the Dean Dome, competed on the varsity DI level with the UNC rowing team, and graduated in 2013 inside Kenan Stadium. I've suffered through the UNC-Villanova game with my Carolina family, and I celebrated our 2017 victory in the Dean Dome and on Franklin Street.

There will be more sadnesses and victories to mark my life with the Carolina family. But the one thing these past eight years have guaranteed is that I will never look back. Anywhere in the world you find another Chapel Hill grad or fan, you are home. The Carolina Way permeates any boundary and turns strangers into immediate friends. These are the reasons why UNC folks sometimes tear up when they talk about the school, the team, or the town...UNC binds itself to your heart, and never lets go.

“What is it that binds us to this place as to no other? It is not the well, or the bell, or the stone walls, or the crisp October nights or the memory of dogwoods blooming. Our loyalty is not only to William Richardson Davie though we are proud of what he did 200 years ago today. Nor even to Dean Smith, though we are proud of what he did last March. No, our love for this place is based on the fact that it is as it was meant to be, the University of the people.” -Charles Kuralt, journalist

And...I still wear that stinkin' hat. Because now I love it with all my heart.