"She heard the rumble again...and then she knew why everyone was running." 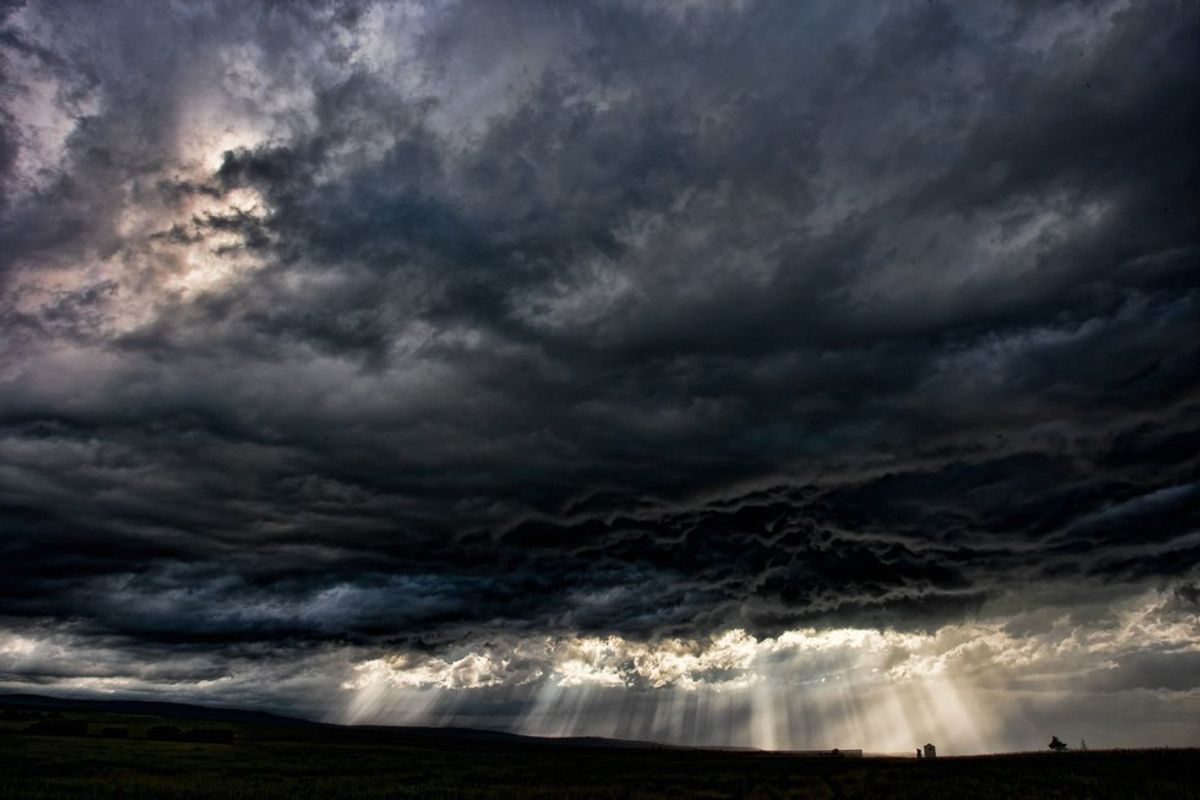 Sally looked around, thumb automatically in her mouth, taking the place of the tooth she had lost only a day ago. She couldn’t move her feet. She didn’t know why. And she couldn’t find her sister, though Liz had been there a moment ago checking the map. They had been headed to see the meer-somethings. Like Timon, from Lion King. But then...

All around her, the visitors to the mountain-top zoo scurried towards exits, buildings, anything to take cover. Families fled into the bathrooms. Big kids were under the giraffe exhibit roof.

The giraffes stumbled on their long legs. They became a tornado of yellow and brown.

Then Sally saw something black. Wispy, like a cloud, but scarier. Darker.

Out of the shroud of darkness came crashing noises. They sounded like when her mom had dropped those plates last week and they had broken, but worse. Like maybe thousands of plates had fallen from the sky. To her right, the elephants looked funny, trunks in the air crying out like ambulance sirens. And to her left, the zebras were baring teeth and making their own weird noises. Or so she thought, though she could barely hear them over the thunder.

It startled her feet into movement. She pushed one leg backward, then the other. She needed to get away from the black thing and now she could. Her feet got tangled and as she fell, her thumb came out of her mouth as she tried to catch the ground.

She hit the pavement. Her wrist throbbed.

“Ahh!” Sally squealed. She stumbled up, gripping her right wrist with her left hand. “Sissy!” she shrieked. Her older sister’s nickname. “Sissy, help!”

She started running again, but her feet hit something. She fell, this time scraping and bloodying her eight-year-old nose. Through the ground, she could feel vibrations of hundreds of footsteps as people raced around her.

Slowly she kneeled, looking at the ground as she did so. She immediately regretted that decision. Amongst the smoke, she saw the awkwardly bent arm with the bracelet like hers. Half a heart hung from its chain. It read “Friends”. Sally looked down at hers. The pink heart read “Best”.

It had to be...her. She dropped her head into her hands, losing control as tears streamed down her sooty face.

She heard the rumble again, closer this time. Sally drew her teary, blurry eyes upward. She saw it. Falling, in slow motion. And then she knew why everyone was running.