10 Things That Only Texan HS Band Kids Will Understand
Odyssey

Don't get me started on all of the feels at Area. EVERY TIME. 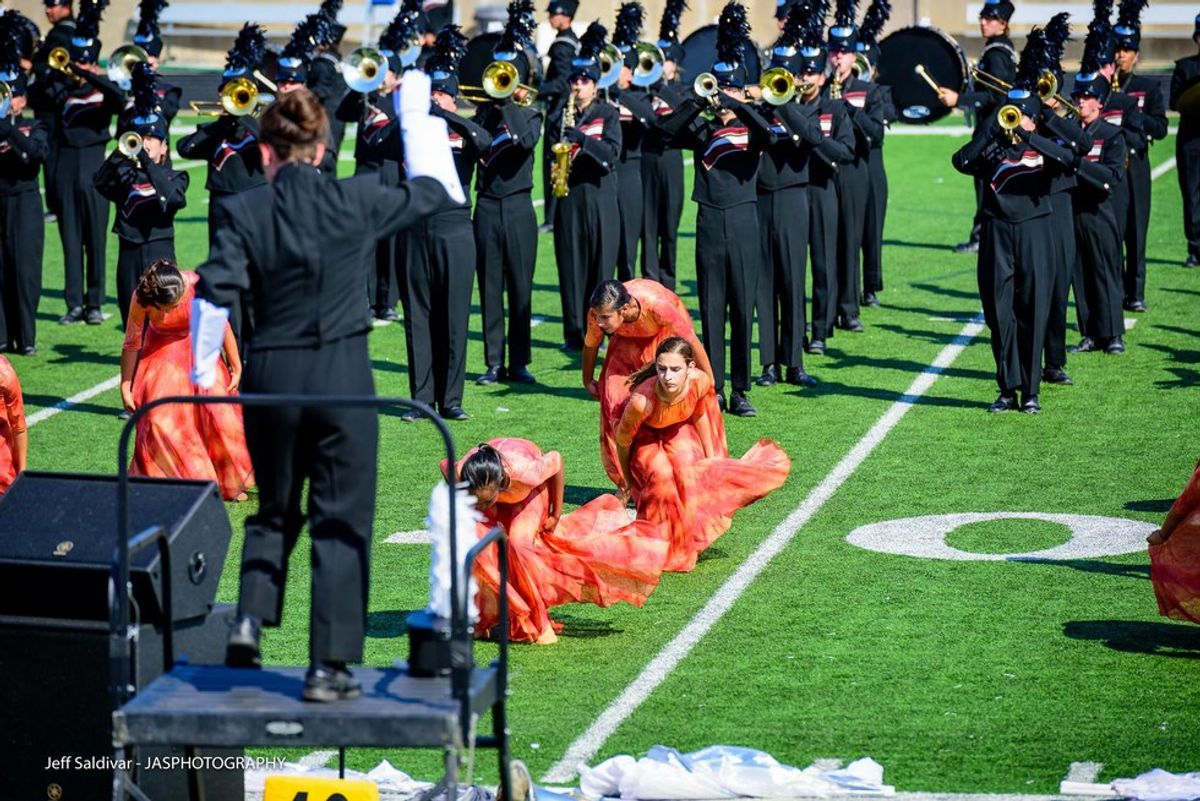 Starting band practice on August 1st is a blessing and a curse. A blessing because you finally get to reunite with your band family again, but a curse because spending 4+ hours in a heat index of 100° is ungodly. Spending 8 hours in band practice every day was nothing less than difficult, but you ended up being less miserable than you thought you would be.

Whether on the way to a football game or contest, bus rides were where the craziness would happen. Almost all of the inside jokes with your band friends would come from total delirium in the bus thanks to the -7 hours of sleep you’d get every weekend. From truth or dare to deep conversations, you always enjoyed spending an otherwise boring bus ride talking with your best friends.

3. Talking about your directors. ALL THE TIME.

4. The last marching contest of the season.

This was always emotional- whether it was a State year or not. Marching out to drum taps for the last time all the way to hitting the last set 8 minutes later, you were completely focused and committed to what you were doing. If you did really well, your drum majors cried on their podiums. And you always did your best for your peers, especially for the seniors.

My, oh my, our favorite. While I am a full on supporter of TMEA and all of its glory, I think all of us can bond over our hatred for Region Auditions. The months of preparation, the long hours in your audition room, covering your name tag every time you had to leave and go pee your nerves out, the hit-or-miss room monitors, the All-Stater who cried after playing it perfectly and claimed that they played terribly, the people who weren’t that impressive somehow getting a higher chair than you, and everything in between. How could anyone forget?

Because Christmas concerts. Our favorite. And don’t forget the slapstick!

AKA the driving force of Texas high school extra-curricular activities that always added and modified rules to their 239283429342 page rule book. And you never heard the end about it in the spring as Concert & Sight-reading Contest got closer and closer.

This always hit you like a ton of bricks. You’d have your region band auditions, get off for Christmas break, then get slapped in the face with “Have you started practicing with your ensemble yet?” If you were anything like me, you avoided ensembles because you were always too busy stressing over memorizing your 6-page long solo. And if you earned a 1 on your performance(s) and were able to go to UT for State Solo & Ensemble, you felt the same stress, except it was basically stress on steroids.

9. Always comparing your band to other bands.

This wasn’t always the healthiest habit, but we all did it. Deep down, you always wanted to outperform the other bands in your school district, whether they were one of the powerhouses or not. If you got bored, you’d sometimes watch videos of the bands who consistently went to State Marching Contest or Grand Nationals. Don't act like you never did this.

Any Texan can agree that marching band here is unlike anywhere else. Performing at least twice every weekend in October, practicing hundreds of hours, and overall taking band so seriously is something characteristic to the Lone Star State. But with that, you get to know people in a way you wouldn’t have been able to otherwise. You see each other in your best and your worst. You cry tears of laughter, joy, frustration, anger, and disappointment together. You understand what having a “band family” really means. And when you look back on your four years in that band program, you can’t help but feel thankful to have been part of it.

Caitlin Marie Grimes
University of South Florida
10707
Beyond The States