What The Women's March On Washington Means To Me.
Odyssey

What The Women's March On Washington Means To Me. 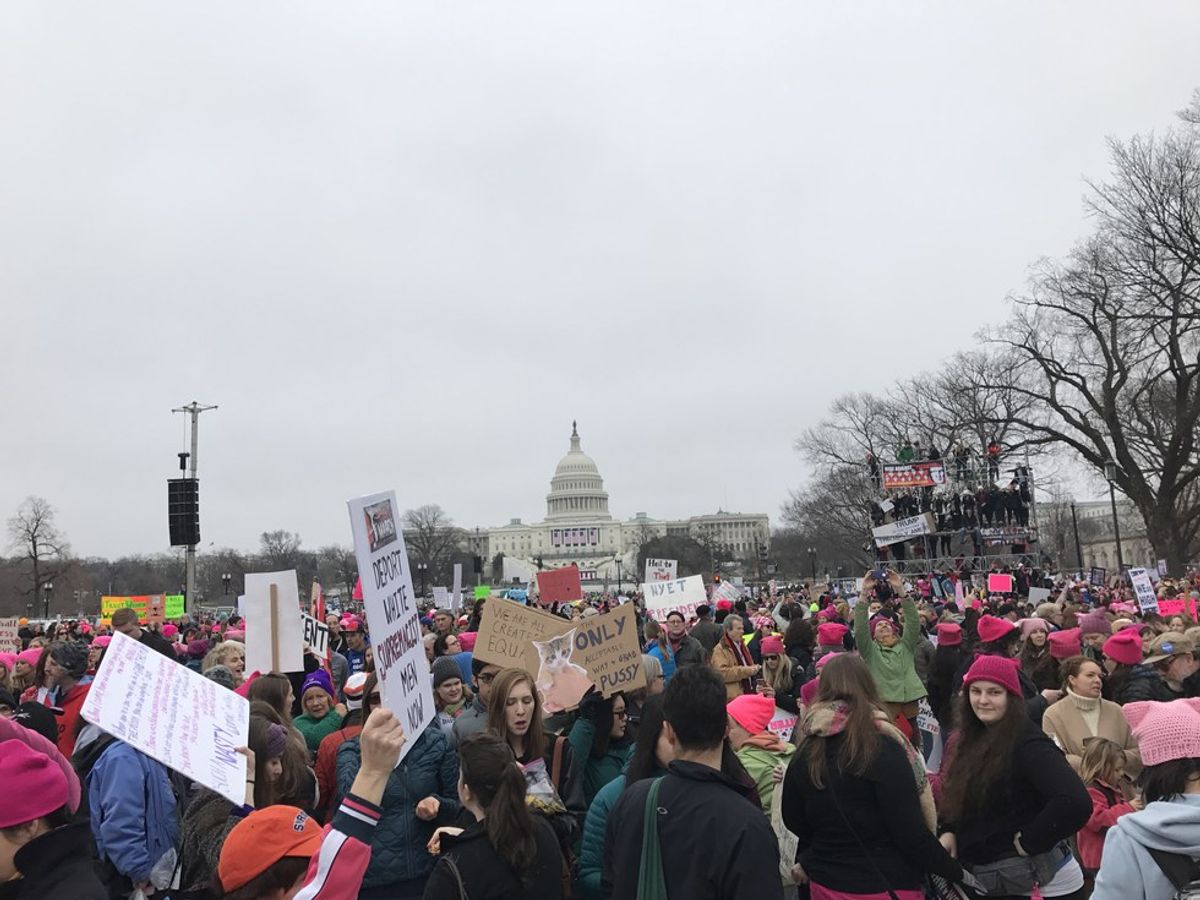 The Women's March On Arkansas.

At four in the morning, my 64-year-old grandmother and I bustled our way out of our quiet brick home with our overnight bags. At 4:30 in the morning, we were being shepherded onto a coach bus full of 53 other women, all of whom were making the pilgrimage to this nation's capitol city to make our voices heard.

It's an uplifting experience, I have to say. Being surrounded by a group of women like this is inspiring. It's been a long, long time since I've existed in a woman-dominated space. As a transgender woman, it can be hard to get involved with other women, in both an activist sense as well as a community one. Being here with all these women, many of whom are old enough to remember marching with the women's lib movement of the 1970s, I feel like I belong and it honestly makes the 17-hour bus ride almost bearable.

I have to wonder though, what inspired these women to drag themselves out of bed, some of them driving up to 4 hours to catch the bus. So as we drove, I asked the women around me this simple question: "Why are you here?"

I got a variety of answers, but the most common among them tended to contain themes of grief, despair, and righteous anger. The most common phrase I heard was "Well, I just had to do something."

For many of these women, it was the first time they'd participated in any organized protest effort. I'm not going to get into questioning why they didn't act sooner–I was just happy to have them there now. A few of the women, including my grandma Iris, had been involved during the 60s and the 70s. Those that remember drew clear parallels between what happened then and what was happening now.

The Arkansas bus dropped us off close to the start of the march route. Even in the wee hours of the morning, it was the biggest group of women I'd ever seen, much less been a part of.

With my grandmother in tow, we set out to make our way to the main stage. We arrived just in time to hear America Ferrera's speech, one of the most riveting speeches of the morning.

"... our rights have all been under attack, and a platform of hate and division assumed power yesterday. But the President is not America! His Cabinet is not America! Congress is not America! WE are America! And WE are here to stay! We march today, for our families, and our neighbors, for our future. For the causes we claim, and the causes that claim us. We march today, for the moral core of this nation, against which our new president is waging a war. He would like us to forget the words 'give me your tired, your poor, your huddled masses yearning to breathe free' and instead take up a creed of hate, fear, and suspicion of one another. But we are gathered here today, and across the country, and around the world today to say 'Mr. Trump, we refuse! We reject the demonization of our Muslim brothers and sisters! We demand an end to the systemic murder and incarceration of our black brothers and sisters. We will not give up our right to safe, legal abortion! We will not ask our LGBTQ family to go backwards! We will not go from a nation of immigrants to a nation of ignorance! We won't build walls, and we won't see the worst in each other...'"

There could not have been a better speech to start off the morning. More and more people were flooding the already crowded rally point, far exceeding the 250,000 people originally expected. It wasn't until much later that I would learn that there had been an estimated total of 1.5 million attendees.

As my grandmother and I forced our way out of the crowd, we were swept up into the people pushing their way into the national mall. I found myself walking aside Secretary of State John Kerry. A unique sight to be sure, but not an unexpected one. Despite my radical leftist leanings, I shook his hand, and let him know that my grandmother was a huge fan of his. She is, for better or worse, more of a moderate liberal than I am. His team was with him so I couldn't get much more than a handshake in, but it was nice to see even the highest levels of government walking with us in solidarity.

So much happened that day that if I were to write it all down, I could fill a book. Suffice to say, this was one of the most memorable days of my short life. Being surrounded by women, all there for different reasons but united by a common feeling of grief for our nation, I realized something.

We can no longer be content to sit idly by behind our computer screens, penning think pieces like this one. We must be out in the streets taking direct action. We have to stand up, to be more than just a mild inconvenience to the people in power. We have to unite as one people and resist our government, for it was turned its back on us.

What use is a march, if we don't use this energy, this collective grief and rage, to stand up to those in power? We have to take back our country by any means possible.

So I'm asking each and every reader of this article, to make a pledge. I want you to promise that you will do everything in your power to fight injustice. I want you to stop playing nice with fascists, I want you to draw a line in the sand and say Not in my house.

Make no mistake–Mr. Trump and his cabinet ARE indeed fascists. In just the first week, we've seen collective gag orders in almost every sector. He's silenced the EPA and punished the National Parks Service for disseminating truths about our environment. He's even been so petty as to lie about the size of his inauguration turnout compared to the turnout for our march. Donald Trump cannot be trusted with this position and neither can his Vice President, Mike Pence, who may possibly be one of the most abhorrent people in our government today.

Donald Trump has put actual, literal, Neo-Nazis in the White House. I don't need to explain to you that this is a dangerous time to be a minority in the U.S.

I may sound radical, and that's because I am. So please, look into getting involved with the resistance in any way. If you don't have the constitution to be on the front lines with AntiFA than do something else to help the millions of Americans who are going to be displaced by this man's radical abuses of power. There are so many ways to help, and please know that this fight will not be easy. It will not be safe for the vast majority of you.

But we no longer have any other option. March as often as you can. Push police out of your neighborhoods. Make your neighborhood white supremacists (and believe me, there are more than a few) feel unsafe. Make them feel threatened and afraid to voice their hate. Make them afraid to attack those of us who cannot fight back without your help.