What harvest and "Day of the Dead" celebrations did the Vikings have? 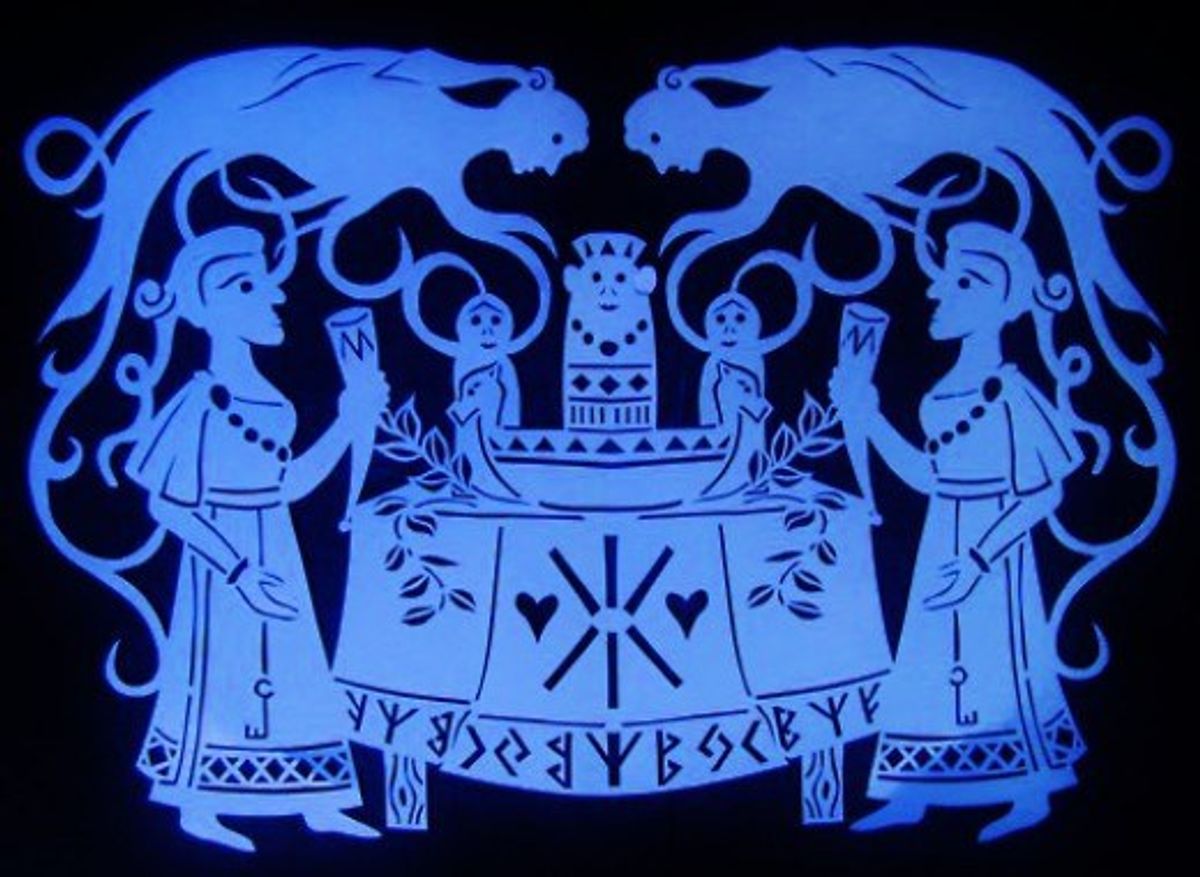 As October begins and leaves start to fall, the anticipation for Halloween becomes crisp in the air. As a holiday, many are aware of the Celtic origin of Halloween and the Christian influences that have caused it to evolve over the ages into what it is now. So I'm not going to talk about that, since it's been talked about in great length so much already. What I wanted to know is did the Vikings have a Halloween equivalent? The answer lies in how we define Halloween. If we define it as the modern holiday that we celebrate today then no, they did not. But, if we look back at the Pre-Christian basis for Halloween and especially the Mexican Day of the Dead the answer is certainly a yes. The Nordic peoples had ritual celebrations called blóts which occurred throughout the year, including just before the harvest season, and were sacrificial towards a specific goal. The two blót s that I will be looking at are the Álfablót and the Dísablót.

In preparation for this article, this blót was the first to come up in my searching for a Nordic equivalent of Halloween. The Álfablót is a sacrifice to the elves at the end of the autumnal season and harvest. How this relates to a "Day of the Dead" is through the mythological understanding of elves in Nordic culture. Alfs (Elves) were associated with burial mounds (pictured below) as they would live in and around them. The reasoning behind this is many texts suggest that elves were merely another incarnation of a human soul or that the dead were merely referred to as elves. An excellent example is of King Olaf of Geirstad, or later known as Olaf Geirstad-Alf. King Olaf, after he died and was buried in a mound, was venerated as an elf, giving him his new name of Olaf Geirstad-Alf (the elf of Geirstad). With this connection between elves and the dead, the Álfablót was possibly concerned with ancestor worship. Since this sacrifice is towards elves, it stands to reason that Freyr, one of the most important gods in Norse mythology, is involved as well.

Freyr was given Álfheimr, the realm of the elves, as a teething gift. This insinuates that Freyr is the ruler of the elves (which many texts claim, as well). Other than his patronage through fertility and prosperity, it is possible that Freyr can be associated with the souls of the dead, since many texts suggest elves and those souls are one in the same. So the Álfablót is just as much a sacrifice to him as it is to the elves. The trouble with the Álfablót is that it was an extremely private event, even going as far as disregarding hospitality and turning travelers away, and so there aren't many details out there about it. All we are left with is putting the puzzle pieces together, as you can see.

In contrast to the Álfablót, the Dísablót was a public event that was widely celebrated. In fact, it is still celebrated today at Uppsala, Sweden. Carried out by the head woman or mother, the Dísablót was a blót held during the vetrnætr or Winter Nights which were a span of days which marked the transition between the harvest season and the winter season. This blót was a celebration in honor of the Dísir, the goddesses and female entities of the Nordic world. These spirits tended to influence fertility, fate, and well being in general, just as the classical Halloween celebrations are concerned with warding off harmful spirits. There is drinking, feasting, celebration, and glory honoring of spirits through sacrifice and such. The goddesses and beings that would have been most likely sacrificed to during this celebration are Freyja, Hel, the Valkyries, the Norns, the Fylgjur, and female ancestors in general. Most, if not all, of those beings were associated with death or spirits.

The twin sister of Freyr, Freyja, in short, is the goddess of love, beauty, fertility, war, and death. Half of the dead who fall in battle go to her realm, Fólkvangr, which is much like the Greek Elysium. The connections between sacrificing to Freyja and honoring one's deceased ancestors are not hard to make here. The links to harvest and fertility, much like her brother, further strengthen the notions of a classic Halloween-like celebration.

As a being and a place, Hel receives the dead that don't die in battle, but rather die in old age or from disease. Hel controls vast legions of souls and can even control who comes and goes through her realm. It is possible that a sacrifice to Hel would be an attempt to curry favor with this being so that they or an ancestor may be treated well in her halls, or perhaps as a way of sending a message to the dead.

I lump these three together because they all have a similar function having to do with fate or the dead.

Valkyries (pictured below), literally "the choosers of the slain," decide who will die in battle for them to take to Valhalla. To sacrifice to them would be a plea to be honored with the glory of being taken to Valhalla by these beings, as well as a way to honor those who are in Valhalla.

The Norns are beings who control the fates of men and gods alike. It would, obviously, be favorable to sacrifice and honor these beings.

The Fylgjur are a tricky bunch. They are similar to guardian spirits that follow a person around and have an influence on their fortune and certain outcomes of fate. It is noted that if a Fylgjur appears in the form of a women good fortune for the self or the family is in the waiting. An attempt to bring about such fortune at the Dísablót would be beneficial to a community as a whole and would ward off evil beings or events.

From what I have listed here, and read otherwise, both instances of celebration are as close to a Halloween as the Vikings got. The theme of honoring or sacrificing to the dead or beings that have some charge of the dead stays consistent with the origins of Halloween. I as well see the differences between the Dísablót and the Álfablót as a more strict version of what we do today. Our modern Dísablót is the eating, drinking, and fun in close regard to the dead. We dress up as and mimic the dead as a way of bringing us closer to our ancestors. Our Álfablót is the familial remembrances of loved ones as well as the observance of superstitions towards the dead. We have a period of thought and veneration for our own elves.