A sensitive subject that needed to be addressed... 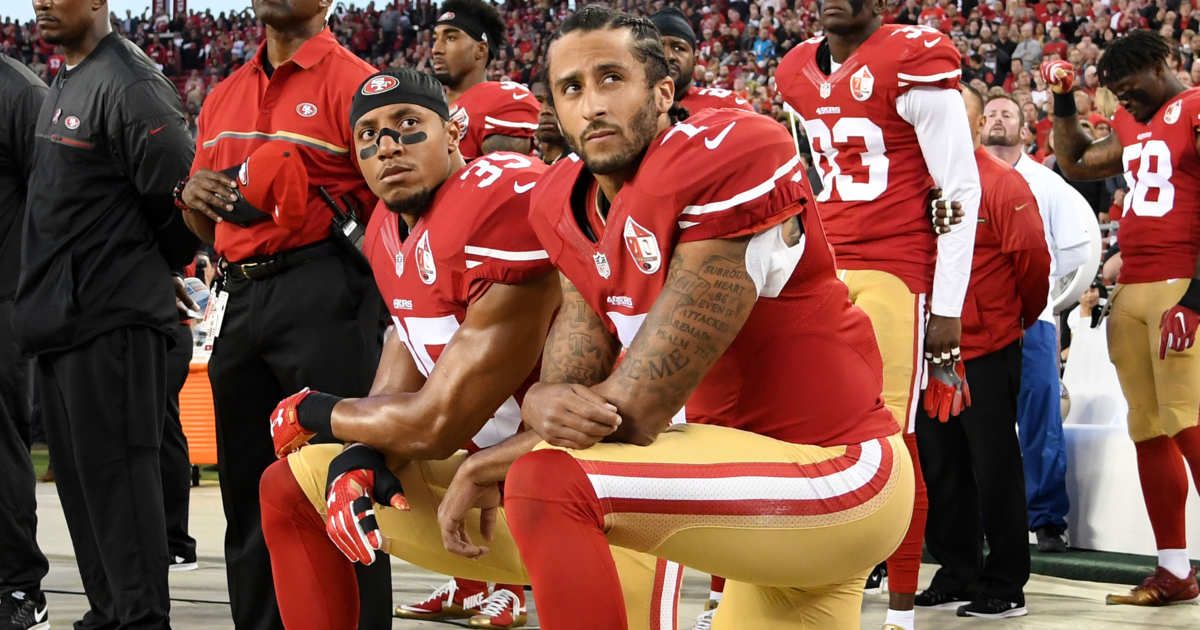 Recently, in the news, we've been seeing and hearing Trump's mouth, more important worldly news, and kneeing during the National Anthem. At first, it was mainly just Colin Kaepernick but now it's people all over the country. Here's my stance on the whole ordeal.

Honestly, I see both sides of the situation. Kaepernick and friends are kneeling because 1, it's their right to do so, 2, the great America we live in today has not been particularly "great" to people of color recently, and 3, not everyone has their hands on their hearts during the National Anthem anyway.

On the other hand, I do see where there could be a problem because yes, we live in America, we're free, all of that. The military fights for us. I understand all of that.

But like I said earlier, it's their right to kneel and it's everyone else's right to think it's wrong.

What I love the most about this whole thing is despite what happens to Colin, despite what they try to do to him or what people say, he's still going to kneel for what he believes in. He believes that there is a social injustice. He said he's not going to pledge and stand for "a flag for a country that oppresses black people and people of color".

It began after the inadmissible shootings of black people by white cops. Which is not often how it's portrayed in the news headlines. It's more like, "Cop shoots black guy who resisted arrest". I'm saying what it is, a white cop shooting a black man, or woman.

Though I understand both sides of the ordeal, I agree with Colin and the cause he's kneeling for. Mainly because it could be me next. Me getting pulled over and killed for reaching for my license and registration. It could be me with my hands up, complying, and still getting killed for "resisting arrest" or "having a knife".

I love this country, but recently I've been loving it a lot less. Now someone reading this may say, "well leave, then. We don't want you here if you don't want to be here". That's not the American way. There are people making others not want to be here anymore because of the injustice, brutality, racism and fear. Fear of me or one of my family members getting killed next.

We are oppressed. We are mistreated. Not me, per say. But my black brothers and sisters. My Hispanic friends. I have, indeed, gone through racially charged situations. I have had racism thrown my way and I was taught to brush it off "as long as they don't touch you". But honestly, if they do touch me, I'd be the one in trouble. Why? I'm the person with the darker skin. I'm more threatening. The width of my nose. The fullness of my lips. The thickness of my hips and the brownness of my eyes is frightening.