And What they Mean 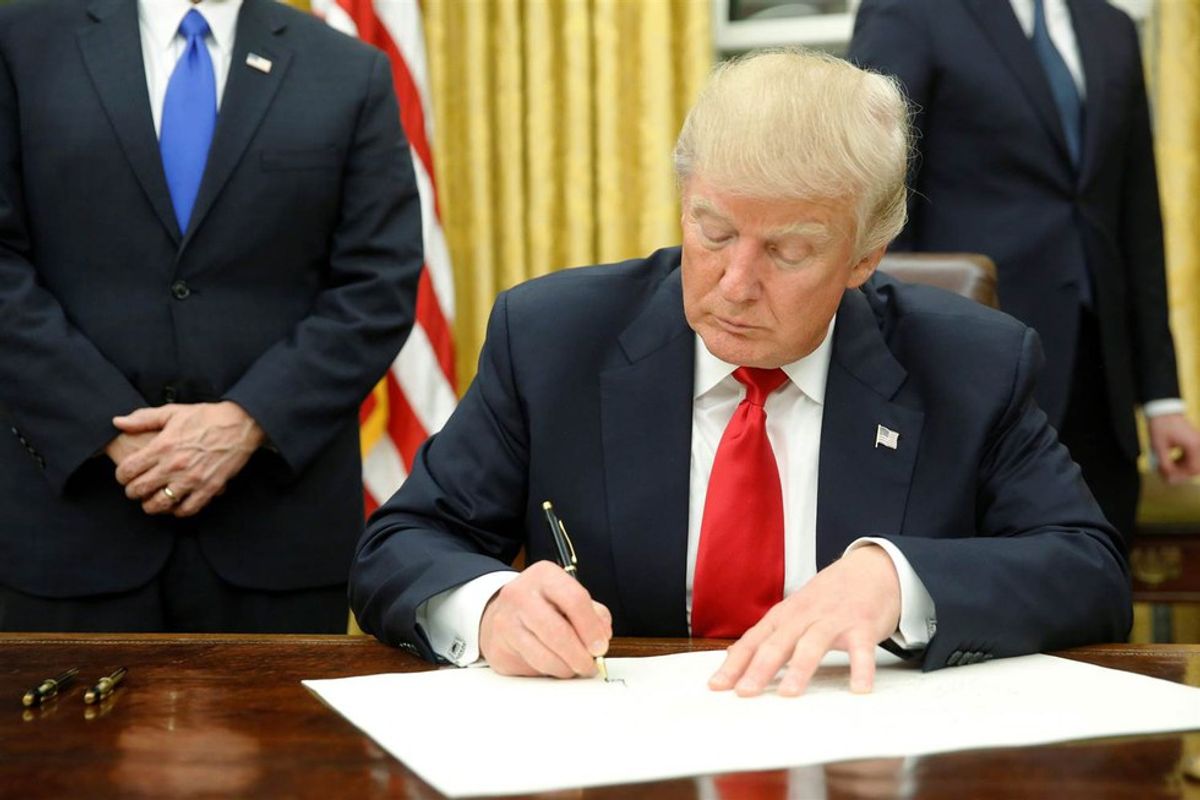 During his first two months in office, our 45th president, Donald Trump has definitely put forward action by signing 34 executive actions. Most of which unsurprisingly invoked negative reactions fro;m not only the nation, but worldwide (because well...he's Trump).

Not all executive actions are the same; in fact there are three types and they each hold different effects and authority.

The first being an executive order, which is issued by U.S. Presidents and it is directed towards agencies and officers of the Federal Government of the United States. They hold full force of law, based on the authority derived from statute or the Constitution (via Wikipedia)

A presidential memorandum is another type of executive action issued by the President to govern and manage the activities, practices, and policies of the many agencies and departments under the executive branch of the U.S. (via Wikipedia).

Finally, the last type is a proclamation. A proclamation is a public and/or an official announcement that deals with a substantially important matter (via google).

That being said, here are each of the 34 executive actions signed by Trump:

The Chief of Staff, Reince Priebus, signed this to direct agency heads to not send new regulations to the Office of the Federal Register until the administration has leaders in place to approve them.

As one of Trump's priority promises during his campaign, he intends to repeal and place the ACA, or Obamacare.

January 23rd: Out of the Trans Pacific Partnership (TPP) (Memorandum)

This memorandum gesture Trump's intent to withdraw from the TPP

This froze all hiring in the executive branch, excluding the military, calling for no vacancies to be filled, in efforts to cut our government's spending.

This not only encourages anti-abortion/pro-choice activists, it also interferes with women's reproductive rights.

The president directed the Secretary of Commerce to look over how federal regulations affect our manufacturers, with the intent to figure out how to reduce them.

Trump had signed 3 memoranda that are set to expand oil pipelines in the country.

This allows governors and/or heads of federal agencies to request an infrastructure project to be considered as "high priority" so it can be fast tracked for environmental review.

Another thing promised by Trump during his campaign, this outlines his intentions to build a wall along the U.S.-Mexico border.

This also calls for the immediate detainment and deportation of illegal immigrants.

This action was created to direct the Secret of Defense, James Mattis, to conduct a readiness review of the U.S. military and Ballistic Missile Defense System, and to also submit his recommendations to 'rebuild' our armed forces.

This being Trump's most controversial order, he temporarily barred people from the seven majority Muslim countries: Iran, Iraq, Yemen, Libya, Sudan, Syria, and Somalia from entering the U.S. for 90 days, and refugees from entering until he decides otherwise.

This memorandum directed Trump's administration "to develop a comprehensive plan to defeat ISIS."

This requires appointees to every executive order to sign an ethics pledge, claiming they will never lobby a foreign government and they will not do any other lobbying for five years after they depart from the government.

As claimed in the title, this order calls for everyone regulation the executive branch brings forward, two must be identified to be repealed

This proclamation declared February as American Heart Month to remember all of those who died from heart disease and to also promote to improving its prevention, detection and treatment.

This memorandum directed the Labor Secretary to look over the fiduciary rule that was put in place during Obama's stay in office, that was intended to protect Americans' retirement money from conflicting adviser from financial advisors.

This entails "Core Principles" of financial regulation that declared Trump's administration is seeking to empower Americans to make their own financial decisions, prevents taxpayer funded bailouts, and reduces regulations on Wall Street so U.S. companies can compete globally.

This action can end up rewriting regulations put in place by Obama and Congress after the 2008 financial crisis.

February 9th: Altering the Order of Succession in the Department of Justice (Executive Order)

This enacts a line of succession to accompany the U.S. Department of Justice if the Attorney General, deputy attorney general, or the associate attorney general die, resign, or are unable to carry on their duties.

As promised by Trump to bring back "law and order" in America, the president signed and order that is intended to reduce violent crime in the country, address illegal immigration, drug trafficking, and violent crime.

This action directs law enforcement to capture and prosecute citizens, and deport non-citizens who are involved in any criminal activity.

Thus seeks to develop new laws which will protect law enforcement, and heighten the penalties for crimes committed against them.

This order establishes Regulator Reform Officers in each federal agency who sift through existing regulations and advise which ones the administration should repeal. This directs these officers to primarily focus on getting rid of regulations that will prevent the creation of jobs, those that are outdated, costly, and unnecessary.

This order instituted the White House Initiative on Historically Black Colleges and Universities, this will aim to increase private funding to these schools, bring forward ways the executive branch can help these institutions to succeed, and influence more students to attend them.

The order is directed towards federal agencies to alter the Clean Water Rule, which is a significant regulation Obama issued in 2015 that clarified what areas are federally protected under the Clean Water Act.

This presidential memorandum gives information needed for the State Department, the Department of Homeland Security, and the Justice Department to put forward Trump's travel ban. This gives each department the directions to intensify the vetting of visa applicants and other immigrants who are trying to enter the United States, to release however many visa applicants there will be by country, and to submit a report after an 180 day period that details the long term cost of the U.S. Refugee Admissions Program.