What A Trip To Ellis Island Taught Me
Odyssey

What A Trip To Ellis Island Taught Me

A testimony every American should read. 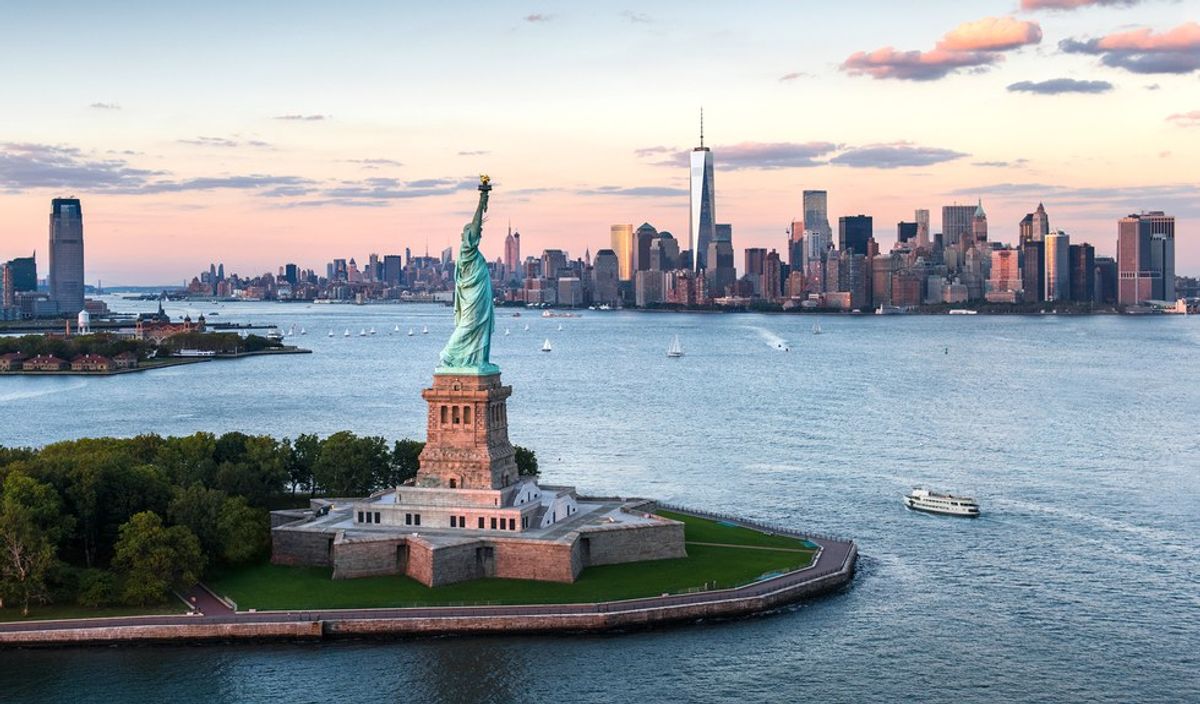 From 1892 to 1954, millions of immigrants from Europe, Asia, Africa, and South America embarked to the United States in search for a better life. After weeks at sea, typically traveling in steerage, these people were greeted by the Statue of Liberty as they entered the country, and a rather large compound on a neighboring island - Ellis Island. This was where every immigrant's journey first began. There was so much immigration in this time frame, it is completely believable that one in four Americans today can trace their roots back to Ellis Island.

This past week, I had the privilege of traveling to the Statue of Liberty and Ellis Island. It was as though my journey there had some sort of semblance to that of those who immigrated hundreds of years ago. As our ferry approached the Statue of Liberty, it was definitely a surreal moment to see a worldwide symbol of freedom in real time with my eyes. The statue was even bigger than I expected and the images in history books do not match up to it whatsoever. Towering over the foggy skyline, I could imagine that all those millions of immigrants must have been just as thrilled to be greeted by it than I was. The feeling one gets when seeing, and even better, approaching Lady Liberty on land is certainly remarkable to say the least. An immense amount of patriotism will even fill the heart of our greatest critics and no other landmark will provoke such emotion.

However, Ellis Island is the exception. Located just minutes from the statue, Ellis Island still stands after 60 years since the last immigrants passed through its doors. Abandoned for years, it was finally remodeled and reopened in the 1980s and 1990s, respectively, as a national park. It is hard to believe that this landmark actually was dormant for so long. The renovation results are impressive and the original white tile which millions from across the world had walked on is still in tact. In the atrium where plenty of newcomers would be packed wall-to-wall, the high arched ceilings bear two American flags, draping down from each end. Enormous sets of windows are located high on the walls, giving the rather dark room a natural, and even ghostly light. Immaculate columns border this atrium, holding up a wraparound balcony for the floor above. The impeccable condition of this structure is shocking, yet inspiring.

It was hard to imagine that those peaceful and quiet halls were once bustling with people from all different background, shouting in different tongues with the hope to be not only heard, but understood. These halls were where my ancestors first began their American Dream - and now I too, was walking on them. My people, who left Poland and Italy over 100 years ago immigrated to a promised land called America with little money but big dreams. Without experience in the English language and the ability to read and write, my ancestors underwent the complicated and stringent immigration process, finishing it with new Anglicized identities. I could not help but to imagine how they felt in that moment, living their entire lives in their impoverished homeland with people only from their ethnic background, and now, they would be thrown into a society consisting of a hodgepodge of cultures with nothing but hope and a new name to steer them toward the direction of Americanization.

I figured that they must have been incredibly scared and confused more than anything; especially considering that they immigrated to the United States at a time where southern and eastern Europeans were not positively received by a generally WASP-dominated nation. But, the reality was that America was becoming the melting pot it still is today, and while my people were once coerced into abandoning their culture to coexist with Anglo-America, they did not have to because they were perfectly capable of thriving in their own right as a result of their skills, dedication, and ambition - not their heritage, religion, or complexion.

The same still remains true today. That is the beauty of America. Despite the common perceptions that one has to be of a certain background to succeed in any given field is far from true. Anyone is capable of anything as long as they put their best foot forward. As skeptic as many millennials are today, there is hope and you do have a chance because the American Dream is not dead, regardless of what anyone says. If it was dead, why would thousands of people be immigrating to our nation each year? If it was dead, why would the current residents remain here? If it was dead, why is our standard of living substantially higher than other regions of the world? Do not let anyone ever tell you that America is not the greatest country in the world. Our innovating spirit is what separates us from the rest and there is always room for success, you just have to be in the right place at the right time and have a bit of hope.

At the end of my tour around Ellis Island, I came across a wall bearing the names of a small portion of the many foreigners who arrived in the United States. On the first panel I saw were the names of my great-great-grandparents, who immigrated from a miserable Sicilian mining town. I smirked to myself, reflecting on the sacrifices they must have made to give their posterity a better life than they ever had. If they had not made that voyage to the states, I would not be where I am today, As mundane as life is as a middleclass shmuck, it has been a pretty desirable one for anyone who immigrated here both past and present. There's still a chance for betterment and something out of the ordinary, although as our ancestors learned, it certainly will not be given.

Kassie Hsu
Baylor University
4029
Panda Whale
Here are 100 things I'd rather to than study. I know the semester just started, but
Featured