To The Haters: This Is The Reason We Protest
Odyssey
CurrentlySwoonLifestyleHealth & WellnessStudent LifeContent InspirationEntertainmentPolitics and ActivismSportsAdulting
About usAdvertiseTermsPrivacyDMCAContact us
® 2023 ODYSSEY
Welcome back
Sign in to comment to your favorite stories, participate in your community and interact with your friends
or
LOG IN WITH FACEBOOK
No account? Create one
Start writing a post
Politics

To The Haters: This Is The Reason We Protest

For those of you saying it's pointless, it actually isn't. 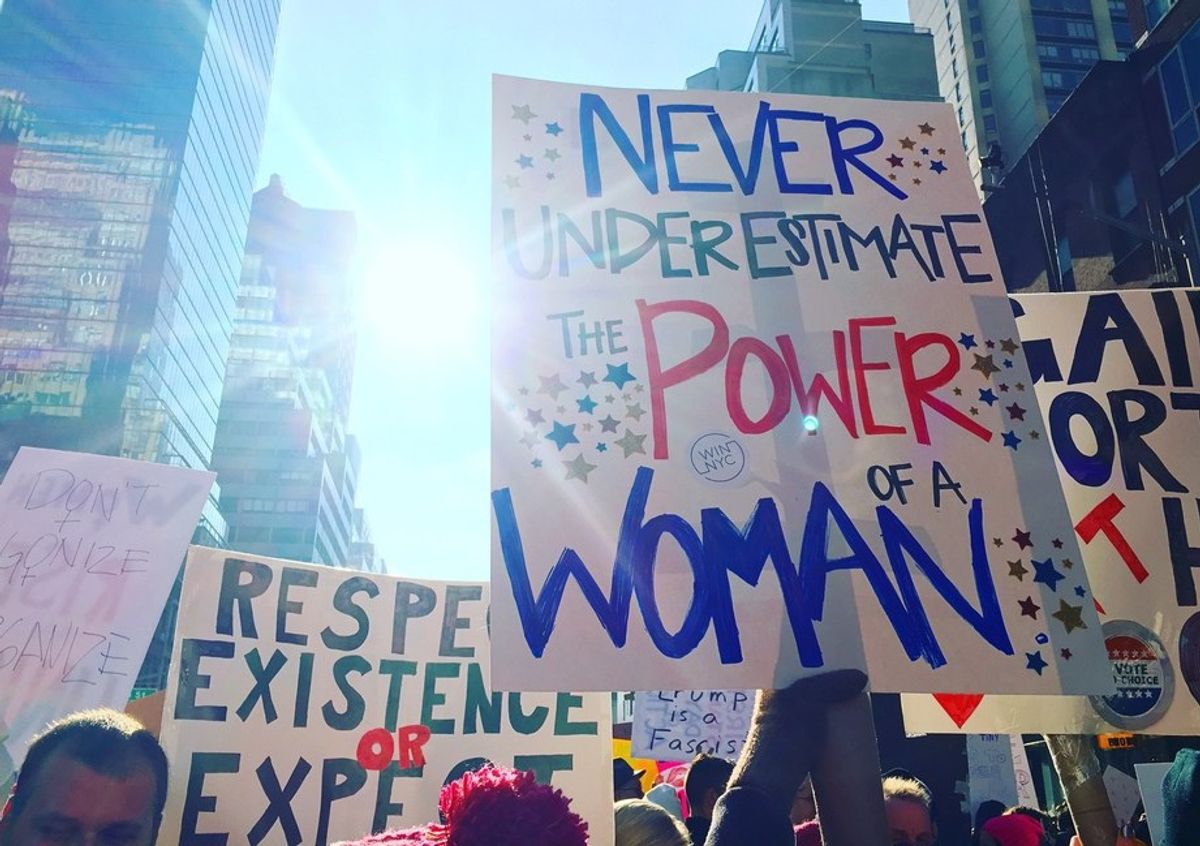 Ever since the election of Donald Trump as President of the United States of America, the country has been consumed by protests. With his official inauguration, a lot of that pent-up anger is boiling over, and protestors are taking to the streets to express their discontent.

This of course begs the question: why?

Why did protestors spill into downtown with signs, knowing nothing they said or did would end Trump as the 45th President?

Why did hundreds of thousands of women travel — from all around the country — to march Washington?

Why did that movement gain so much traction there were sister marches on every continent, including Antarctica?

The answer is not because we think we’re going to change anything; in fact, we know we can’t. The purpose is to send a simple message: This is not normal, this is not okay, and we will not take it lying down.

From a woman who just finished occupying the streets of DC, here are the answers to all the criticisms I've heard about the protests.

This is actually extremely aggravating, and I've read it from conservative websites over and over again. Of course you didn’t protest when Obama won; you didn’t like him, but he was in no way a threatening figure — endangering the tenets of our country. Donald Trump admitted, on tape, to sexually assaulting women; Trump has overwhelming support from neo-Nazis and the KKK; Vice-President Mike Pence believes in psychologically abusive conversion therapy and stripping females not only of reproductive rights, but wants to force them to bury fetuses removed through abortion or miscarriage, and the list goes on. You didn’t like Obama, but Trump is a physical threat to our basic human rights, and there lies the difference.

2. "We could be out celebrating while you're protesting, but we have actual jobs."

Inauguration Day is considered a federal holiday, first off. Second, if it was that important to you, you would figure it out. The 500,000+ women, men, and children at the Women’s March on Washington were not all unemployed and waiting for an occasion to break their protest signs out. They took time off work and made their way to DC or any of the other marches happening around the globe because it matters. This is bigger than us or our jobs — it's history.

3. "It's just a bunch of millennial snowflakes out there."

Within two weeks, I have been to two protest marches: one in celebration of MLK day in Lexington, Virginia to march against the Confederation flag parade that happens that weekend, and the Women’s March on Washington. In both cases, people from every single generation, race, ability level, you name it, were present. This isn’t a generational thing, it’s a justice thing.

4. "The women's march was just a white feminism thing," along with, "What are you even protesting? I have all of my rights."

To address that first one: absolutely not. Discussed at the large rally in DC were issues like economic justice, reproductive rights, the wage gap, Palestine, incarceration and police reform, justice for refugees, undocumented immigrants, and Muslims, and plenty other important female issues. One of my favorite parts of the rally was when a speaker said “You want to talk about women’s issues? Fine, let’s talk about the economy. Let’s talk about climate change. Let’s talk about…”

In response to the second one, none of us wanted to be out on an overcast, 50-degree day surrounded by hundreds of thousands of people and spending up to two hours on the metro for kicks. We are fighting for tangible rights that are under attack. Reproductive justice and healthcare have already been put up on the chopping block; we aren’t imagining this.

5. "Do you honestly think you're making a difference?"

Yes, I do. Even with our large numbers, we cannot reverse a presidential election. We cannot refute the electoral college even though Hillary Clinton won the popular vote. Donald Trump is our president, and we’ve accepted that. What we will not accept is that blatant fascism, lies, race-baiting, fear-mongering, and a whole slew of other disgusting tactics as our new normal. We will fight to the end, and we will not turn back. This is our country, and Donald Trump answers to us. We are just making it perfectly clear what our expectations are.