So There's This Thing: It's Called Post Graduation Stress Disorder

People are finding jobs, getting married... And I still can't decide what to eat for breakfast. 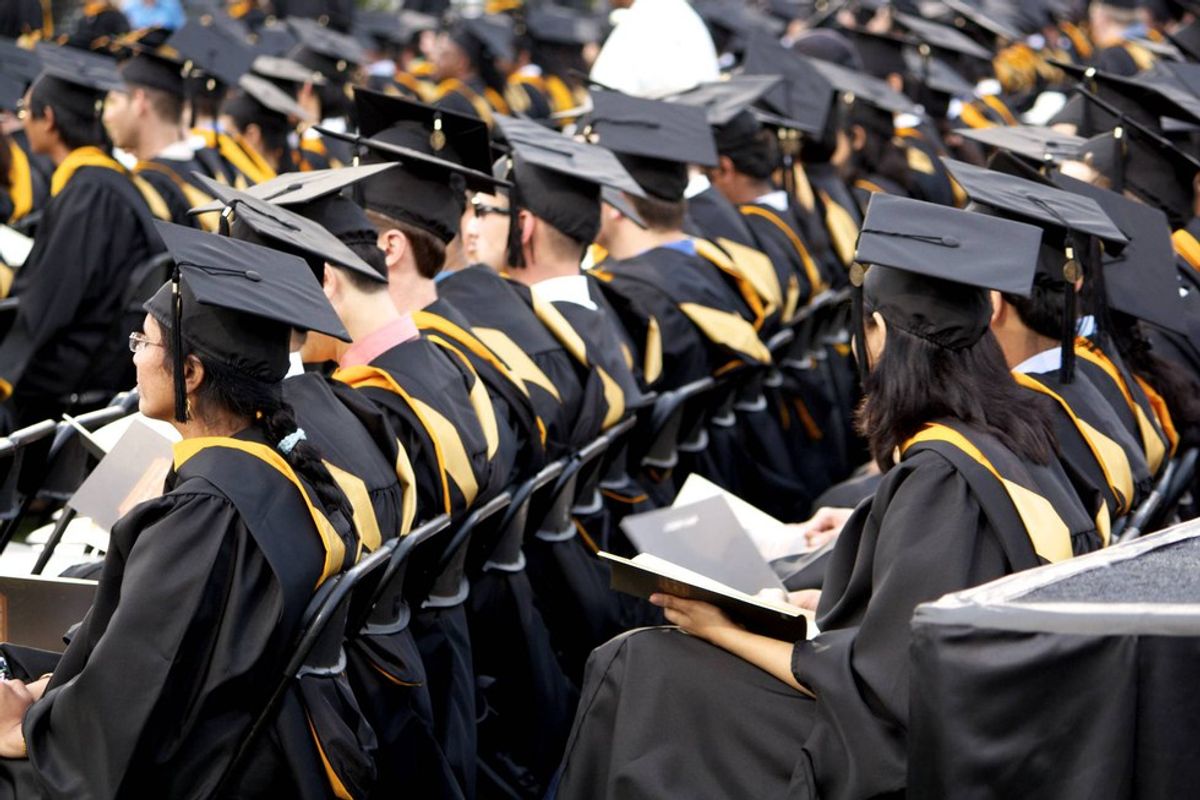 For most of us, our decisions in life have been defined by what we think is expected of us. We went to grade school, middle school, high school, and on to college. Sure, we had to decide which college to go to, but we went to college. We’ve done what we were told. We’ve followed the path that our families, friends and society have drawn out for us.

And all along we’ve been driving along this path with the knowledge that there’s a cliff looming somewhere ahead—a sudden drop-off. That being said, the idea of graduation is utterly terrifying. This terror is only magnified each time one of your friends informs you of their post-graduate plans. When I was home recently, my friend told me about the job interviews she had already lined up. My stomach dropped, and I wondered whether or not I should be looking for jobs to accept seven months down the road. I was even more concerned when my roommate announced that she has already accepted a full-time position for after graduation. I was beginning to panic, to say the least.

But, then I realized something. Our paths aren’t going to be the same anymore. In fact, they shouldn’t be the same. Our entire lives have been spent doing the exact same thing as our peers: going to school every day and working temporary summer jobs. For people like me (students who have no idea what they want to do for a living and whether or not they want to go to grad school), it’s easy to feel behind. I am genuinely ecstatic for my roommate and her job. That is wonderful news, and I’m sure she’ll do really well. On the other hand, there is absolutely nothing wrong with coming to the end of the path and jumping off the cliff with no idea how you’re going to catch yourself. (I should clarify that I mean this quite figuratively. Please don’t go jump off a cliff.)

Of course, it’s scary to have no direction after graduation—to have nowhere to go but back to your parents’ house. But it’s not unusual. According to Forbes, at least 45 percent of post-grads moved home to live with their parents in 2015, and the Washington Post revealed that “more than four out of five students graduate without a job.”

When I first learned this, I thought, “Sure, but at least most people have some idea as to what they want to do with their degree.” Believe it or not, while people might think they know what they’re going to do, they often don’t. In 2014 Bloomberg revealed that “graduates today . . . [are] unlikely to get a job that they are qualified for or in their area of expertise.” Similarly, according to CBS News, “32 percent of college grads said they had never worked in a field related to their majors.” So as it turns out, most graduates never accurately anticipate what their first job will be or where the future will take them.

Another trigger of post-graduate stress seems to happen every day—engagement announcements on Facebook. I don’t think I’m alone when I say that every time I see another one of my peers get engaged, that sense of being behind in life emerges again. Although it seems like everyone and their brother is getting married right out of college (or even during college), it’s actually quite uncommon. The Atlantic reveals, “The average age of first marriage in the United States is 27 for women and 29 for men.” An early marriage may be a completely reasonable decision for some people, but it’s important not to feel panicked if you don’t have a ring on your finger at 22. There is not a right time to get married, just like there’s no right job to have after graduation.

Although having a plan is comforting, not having one can be even better. There is so much possibility waiting for us once we graduate. Having tunnel vision for one profession, one company or one particular life is so limiting. Of course jumping off a cliff with no wings and no parachute is scary, but it’s also exciting. There is the possibility that you could crash and burn, but it’s more likely that you’ll build a bridge for yourself. And even if you do end up at the bottom of the cliff, you’ll pick yourself up and you’ll keep going—you’ll get to the other side. You might just take a different route to get there.

And there is nothing wrong with that.