No, The Post-Election Social Flare Up Is Not Us Just Whining
Odyssey

No, The Post-Election Social Flare Up Is Not Us Just Whining

Human values are genuinely being threatened 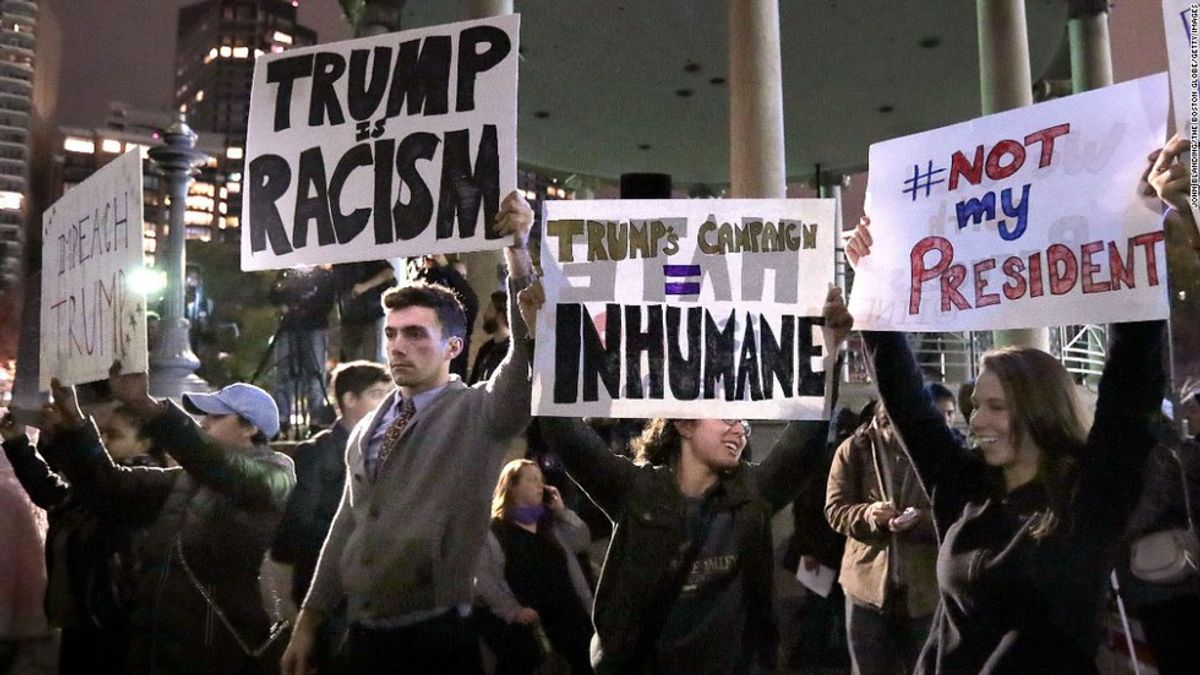 A few of my friends, whom I respect and cherish very much, as well as many other people have a difficult time understanding the meaning behind the protests that have been occurring nationally. Well, in the most respectful way possible, I will do my best to highlight their reasoning.

1. Trump has attempted to normalize very radicalized and hateful viewpoints.

Yes, whether you want to accept it or not, Trump has said things that undermine human values. And all of his comments have been directed at marginalized groups of people. I will list some examples.

"When Mexico, sends us it's people, they're not sending their best. They're bring crime, drugs, their rapists."

This is about as blunt as it gets right here. He, in this one comment, just attacked every Mexican that has ever entered this country, legally or otherwise. For many Hispanics, this is a frightening reality that they have woken up to. This same man whom at first was just a candidate running for office is now the president-elect. How would you feel if the Native Americans shunned the Europeans when they entered America without documentation. Exactly, you wouldn't be comfortable either.

"If I were running The View, I'd fire Rosie O'Donnell. I mean, I'd look at her right in that fat, ugly face of hers, I'd say Rosie, you're fired."

Yes, Trump has also attacked women, because according to him, if you're not pretty enough according to his standards, then you deserve to be barred from any kind of opportunity.

Trump has also proposed a ban on all Muslims from entering the country and has mocked a reporter with disabilities. There are so many things that his campaign has done and its lasting effects are all too noticeable.

2. Trump's campaign has emboldened his supporters.

While many say that "oh the election is over, get over it", they clearly aren't being affected by the aftermath of his campaign. Trump's support base, particularly at his rallies, have had a record at attacking marginalized groups of people who are brave enough to even show up to them. Now their violence and hate is spewing everywhere. Again, I'll list some examples.

In Penn State, the black freshman class of 2020 were added to a GroupMe with an event titled "Daily Lynching". In this group chat, blacks were repeatedly called "n*gger" and were being threatened with lynchings by hateful people. Oh but excuse me, we're just whining according to you.

On the University of Rochester campus, students wearing hijabs heard students saying "I can't wait till we get rid of these people." Another product of Trump's rhetoric due to the Muslim ban he propositioned earlier in the campaign.

Again, on the University of Rochester campus, a Pride flag, which is a symbol of progress for the LGBTQ community, was burned. This marks an emphasis on "traditional marriage", that Trump has mentioned several times throughout the election season.

3. Society's response to President-Elect Trump and the hate crimes.

Protests. The only way for people's voices to be heard is to exercise their right to peaceful assembly. Make no mistake. Most people have accepted the outcome of the election, as Trump won fairly. However, the issue is not about who won. It's about what his victory represents. It's about the effect that it has had on his supporters. They boldly come out and attack marginalized groups of people because their champion has won the day. Had it just been any other normal election, where people's basic humanity wasn't being threatened, we would have continued on as we always have. But this is different. This is a man who has tried to normalize hating on people who aren't the typical white male. Now he shall ascend as the head of the most powerful nation on Earth. What message does that send to us as American people? What message does that send to the world? Even now, many world leaders right now look at us with disappointment and I have to say they are justified in doing so.

And as a side note, to those people saying that if Trump had lost, we wouldn't have been protesting like you cry-babies, maybe you should look at some of the militia groups who supported Trump. They were prepared to have a civil unrest if he lost, citing that the election would have been rigged. We didn't miss that so stop being hypocritical.

This is where my friends and I tend to veer off in opposite directions. A controversial issue that has been brought up concerns the burning of the American flag as a sign of protest. I'll grant that burning the American flag is probably one of the more shocking things anyone could do and I'm also aware that it doesn't sit well with a majority of people. However, I want you to take a minute and consider 2 things.

A. They have the constitutional right to do so as it is protected speech. The Supreme Court decided in 1969, as a protest to the Vietnam conflict, that flag burning, under the right circumstances, is protected under the First Amendment. Again, I grant that just because you CAN do something, doesn't mean that you should do it. And this may be one of the those instances, but that is subject to interpretation.

B. If burning the flag is seen as an attack on American values, then should the same logic not apply to Trump's entire campaign? If you are angry at people burning the flag, that's understandable. But if that is your logic then you should also be equally as angry at what Trump has condoned for his entire campaign and what his supporters are doing now. They are equally bad if that is the way you view it.

I've done my best to illustrate the nature of the situation. I leave the interpretation up to you. If you wish to debate me on this, I gladly welcome it, but be respectful. Thank you.

Kassie Hsu
Baylor University
426
Panda Whale
Here are 100 things I'd rather to than study. I know the semester just started, but
Featured