The Houston Astros can't stop stealing signs, even their fans. 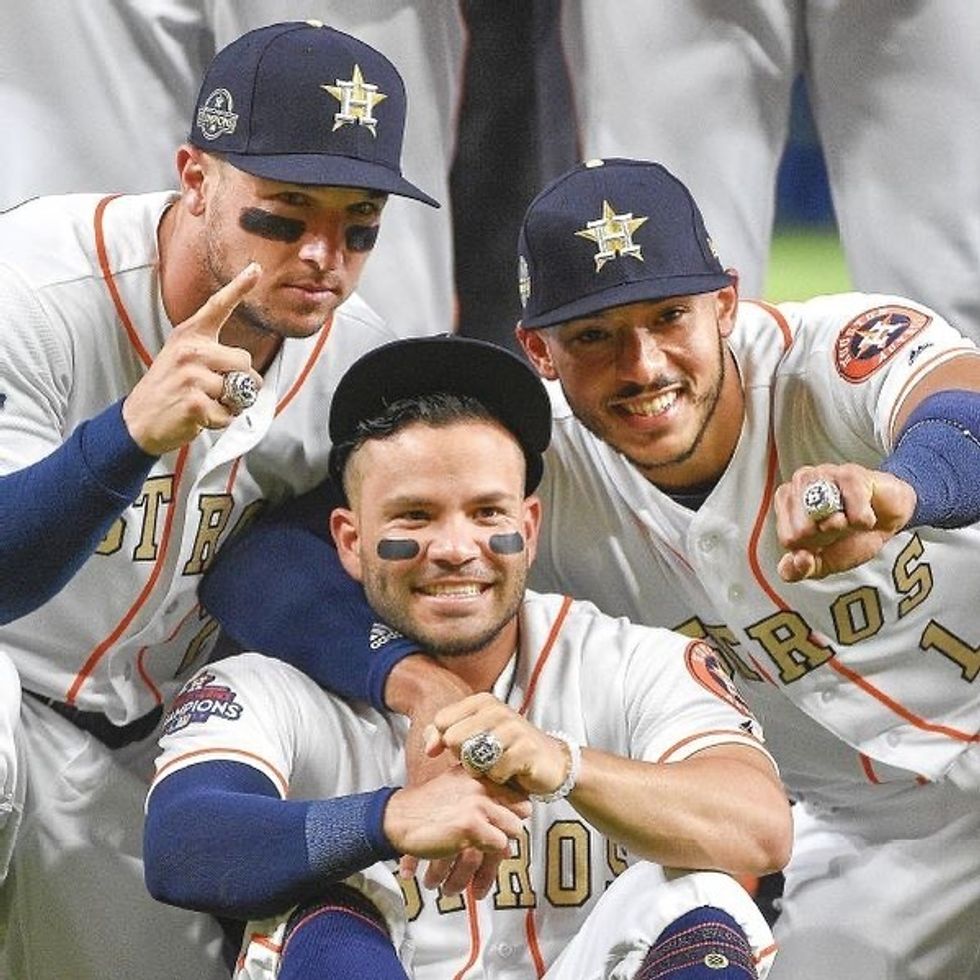 Major League Baseball has done everything they can to put the Astros cheating scandal behind them, but everything they do they somehow do it wrong. Even the Astros can't do anything right, during their first Spring Training game, they took away signs from fans that made fun of the Astros because of their cheating scandal. Following this scandal, this is a chance for baseball to see what they did wrong, and oh boy there was a lot they did wrong, but in order to look back at this, they need to put away this issue for good, by punishing the Astros.

How Baseball Completely Messed This Up

Rob Manfred said that baseball would conduct a full investigation about the incident, and they did, in which they found that the Astros used their instant replay reviews in order to decode pitcher to catcher signs.

Once this was found, MLB punished the Astros, and this was considered one of the harshest punishments in baseball history, he says sarcastically.

All this is doing is promoting other teams to cheat like the Astros did, because they now know there is no real punishment that will be handed down.

Yet commissioner Rob Manfred said teams will be punished for intentionally throwing at the team which has left the biggest black eye on the game of baseball since the infamous Black Sox scandal in 1917.

How Rob Manfred Has Completely Messed This Up

Manfred though received much criticism for the punishment he laid down following MLB's investigation of the Astros cheating scandal.

After he was crushed by the media, he would then say that he wouldn't strip the Astros of their World Series trophy because it is a "piece of metal", yes, one of the most coveted trophies in all of the sports was call a piece of metal.

It seemed that no matter what Manfred said, he couldn't say the right thing, and during the middle of one of the biggest cheating scandals in the sports history, this is possibly the worst thing he could do.

How The Houston Astros Literally Couldn't Do A Single Thing Right

*Sigh*, the Houston Astros may have one of, if not the worst, media programs in all of sports.

It wasn't until the first day of Spring Training where the players would make remarks about the scandal, and they seemed to be the most scripted statements in the history of apologizes, except for one.

Carlos Correa, who was a part of the scandal, would come after every person who tried to tarnish the Astros 2017 World Series win because according to Correa, they still had to win the games.

Yes. Correa is correct, but when an MLB pitcher says he would rather face a player whose arms are bigger than a bowling ball, then someone who knows what pitch is coming, then it seems pretty damn easy to win those games.

This media frenzy was so bad, the Rich Eisen went on his show, the Rich Eisen Show, and made a scripted apology that he said the Astros could use, and this was 1000 times better than anything that Astros players said.

How To Fix This

First is very simple, punish the Astros, no not the death penalty, something much much worse than the death penalty, Altuve loses 2017 MVP award, Astros lose 2017 World Series trophy, Astros are banned from Playoffs in 2020 and 2021, Every player on the 2017 Astros team, including whistle-blower Mike Fiers, are suspended for 100 games, and Jose Altuve, Alex Bregman, George Springer, Carlos Correa, and Josh Reddick, are banned from MLB Hall of Fame, and all Astros players are banned from competing in the MLB All-Star festivities.

If this happens, then there is no way a team will even think of trying this ever again, which when you have a scandal of this magnitude, is what you want.

Second, Rob Manfred needs to issue a "state of the union" apology/statement about the Houston Astros, informing the media that this will be taken care of, which hopefully will restore some trust with players that have a sour taste following Manfred's comments.

Lastly, fans and players should be encouraged to shame/punish the Astros.

Fans shouldn't be removed from games for bringing trash cans to bang while the Astros are up, fans shouldn't also have signs taken away that have remarks regarding the Astros scandal.

Yes, players should be thrown out of the game for throwing at the Astros, but that's it, no suspensions, teams shouldn't have to shake the hands of the Astros players, or acknowledge the Astros during the game.

4 Ways To Deal With Your Anger Issues, No Matter What's Going On

My Mental Illness, While Horrible, Taught Me So Much About Life