The 18 Stages Of Being A Lazy College Student
Odyssey

The 18 Stages Of Being A Lazy College Student 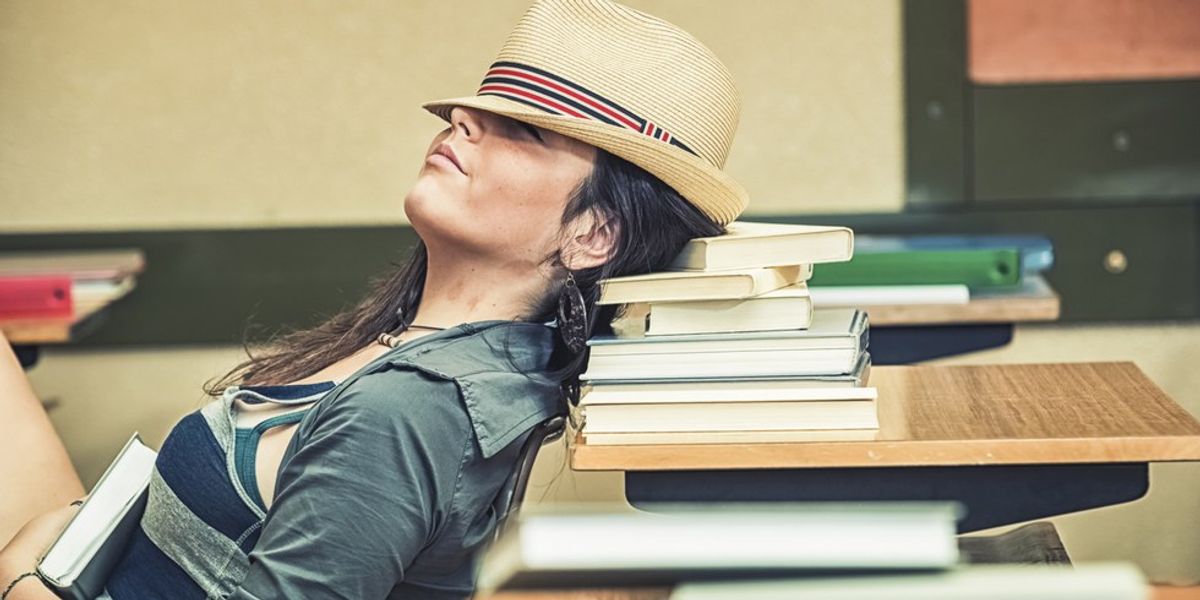 The truth is, even though college generally requires more effort than high school, once students get used to the routine and the workload, they often find themselves getting a little lazy. The whole point of college is that you’ve got to learn how to stay on top of your own progress.

Some people excel at that, and others, not so much. The vast majority of college students manage to find a fairly satisfying balance between the two, where they pass their classes while still retaining the title of “lazy college student.”

Laziness presents itself in different ways on different people, though. Sometimes your own particular brand changes over time, and sometimes you can exhibit several of these lazy stages at once. When you think of a lazy college student, it could mean any of these things.

18. The “skimming the reading” stage.

One of the most common stages. It begins when you realize there’s no possible way you could ever get through all the reading for every class, so you decide to just skim the reading instead. Flicking breezily through the pages and scanning chapter headings is just as good, right?

Instructors all over the world use lots of the same textbooks and materials. That’s why, if you Google the exact question on your homework, you’ll often get the exact answer you need. You didn’t hear it from me, though.

16. The “occasionally sleeping in class” stage.

You’re so tired, why not let yourself doze off? Okay, just this once…

Once this stage starts, it’s a slippery slope down the rabbit hole of self-sabatoge. It’s hard to come back once you’ve missed too many classes, so be careful.

14. The “sleeping in the library” stage.

It happens to everyone at least once. For some people, it happens a lot more than that. However, if you stay in this particular stage too long, people might think you’re homeless and make you leave.

You’re too lazy to even take a shower? Come on, man.

For girls, this stage is inevitable and it coincides with the winter months. For guys, it’s indicative of one of two things. One, you’ve decided to grow a beard. Two, you’re just so freaking lazy.

Your mom’s not around to tell you to get out of bed, so why bother?

Mom’s also not here to tell you to go to bed because you have a big, important day tomorrow. I bet you didn’t know there was such a thing as being too lazy to go to bed, but there is.

9. The “video games are more important than studying” stage.

This is when you’ve been sitting in your gaming chair for so long, you’re practically melted into it. When was the last time you went to class? No one knows.

When someone gets lazy with their social life, it usually takes this form. Two people who are dating become connected at the hip and never go anywhere without each other. Raise your hand if you’ve lost at least one friend to this form of laziness.

This one can also be a difficult hole to get out of, but for some people it’s just a fleeting phase that comes during a time of great frustration. When you’re overwhelmed, sometimes the easiest defense mechanism is to hide behind the wall of I-don’t-even-care. Just get out from behind it as soon as you can.

Someone should do a study to find out how much grades plummet in colleges nationwide during the NCAA basketball tournament. There are so many games to watch, who could possibly have time to work on school?

Is this major what you really want to do with you’re life? Is college really where you want to be right now? A minor existential crisis is almost inevitable at some point, but it can really have a negative effect on your schoolwork since it makes your productivity go way down.

4. The “it’s better to just drop the class” stage.

The point of no return when it comes to laziness is when you realize that you’ve done absolutely nothing all semester and you need to drop at least one class or you’ll fail and it will ruin your GPA and possibly put you on academic probation. It’s the kind of laziness that’s so advanced, you have no choice but to throw up your hands and bite the bullet.

I like to call this stage “laziness in moderation.” This is when you resolve to put forth the minimum effort in all your classes so that you can still be lazy without ruining your whole entire future. It’s a fairly comfortable place to be.

The last few months before graduation, seniors tend to become lazier than they’ve ever been before. It’s only natural. They’re exhausted and they’re done caring. Or at least they would be done caring if they didn’t still have to pass this last round of finals.

This is when laziness turns into desperation. You’re out of practice from a whole semester of doing almost nothing, but now you’re forced to make up for all those lazy days right now. It’s going to be hell, so good luck.