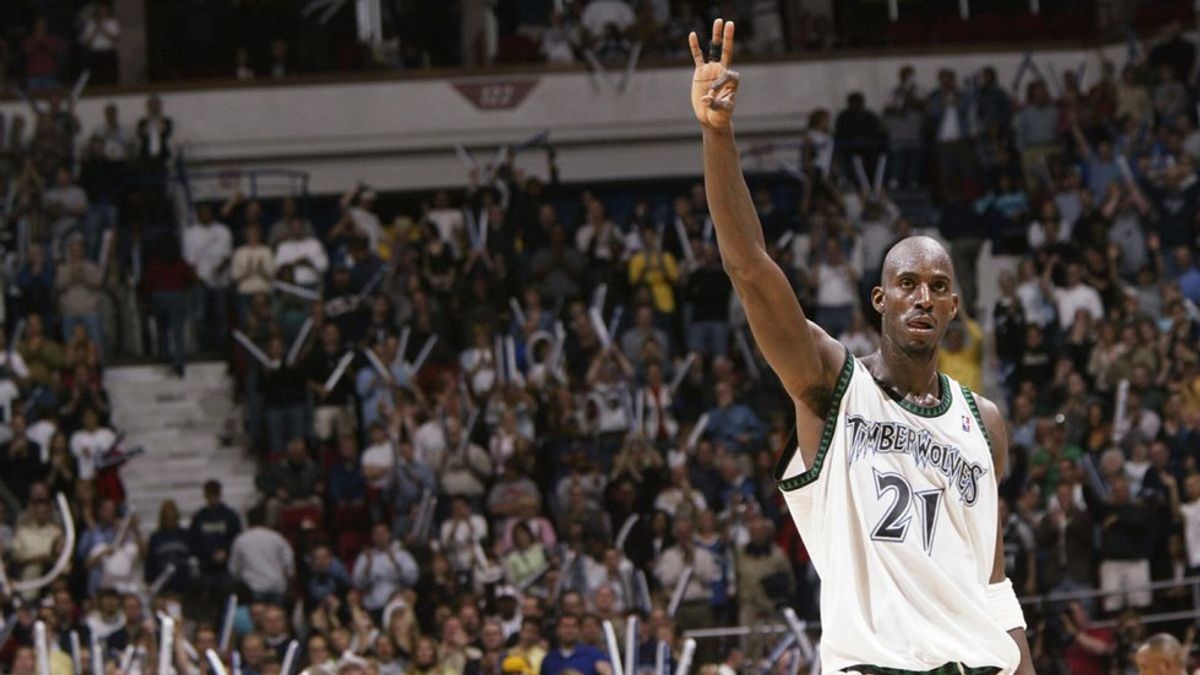 Kevin Garnett recently announced that he'll officially be retiring from the NBA after spending 21 years with the Association. Over the past two decades, Garnett earned himself the reputation of being one of the fiercest competitors and nastiest trash talkers both on and off the court.

Not only was he tenacious and edgy, but he was also incredibly talented. He was drafted fifth overall in the 1995 NBA Draft by the Minnesota Timberwolves straight out of Farragut Career Academy in Chicago, IL and he went on to become one of the greatest players in NBA history. He is an NBA champion, one time most valuable player, one time defensive player of the year and a 15 time NBA All-Star. Garnett also ranks at least 17th or better on the all time lists for points, rebounds, blocks and steals.

Garnett spent 12 seasons with the Timberwolves and quickly became a rising star and household name. However, frustrations with the organization over multiple first round exits in the playoffs boiled over and led to trade talks before the start of the 2007-2008 season. The Minnesota Timberwolves eventually agreed to send Garnett to the Boston Celtics in exchange for seven players, making it one of the most lopsided deals in NBA history.

Garnett's arrival in Boston and combining of his forces with fellow superstars Paul Pierce and Ray Allen signaled the beginning of a new "Big Three," named after the original trio of Celtic superstars from days long gone: Larry Bird, Kevin McHale and Robert Parish, Their union proved to be a formidable one, as Boston went on to win the NBA Championship, against the rival Los Angeles Lakers no less, in their first year together.

In the years following, Garnett enjoyed measures of playoff success the likes of which he'd never seen as a member of the Timberwolves, returning to the NBA Finals stage in 2010 where he and his team lost to the Lakers in a decisive seven-game series.

No more than a few years later, Garnett and his teammate were traded to the Brooklyn Nets as a part of Boston's rebuilding efforts. After about a year and a half with the organization, he waived the no-trade clause in his contract and was traded back to the team that provided him with his first opportunity in the NBA, the Minnesota Timberwolves.

Although he was welcomed back with open arms, Garnett wasn't nearly the same player he had been when he'd left the organization. Age and its limitations had taken their toll and he could only contribute sparingly on the court. Off the court however, the intensity of his presence was felt as a mentor and guiding force within the locker room for the up and coming young core of the Timberwolves, which includes the likes of Karl-Anthony Towns, Andrew Wiggins and Zach Lavine, three budding young stars who have a valuable resource in Garnett and his wisdom.

Garnett may be closing the chapter on his playing days, but it's impossible to imagine him leaving the game, or the Timberwolves, behind. There's hope within the organization that he will remain with the team in either a coaching or front office role. Given his experiences with the team over the last season and a half, this should prove to be a nearly seamless transition. It will be strange to begin a new NBA season next month without the likes of Kevin Garnett, or Kobe Bryant and Tim Duncan for that matter, gracing the basketball court, but their memories live on. It will be difficult to watch a new generation of players attempting to fill his huge shoes, but Garnett himself said it best...

Caitlin Marie Grimes
University of South Florida
7103
Beyond The States