If you don't want to be called a bigot or a sexist, stop allying with a party who elected a bigoted, sexist president 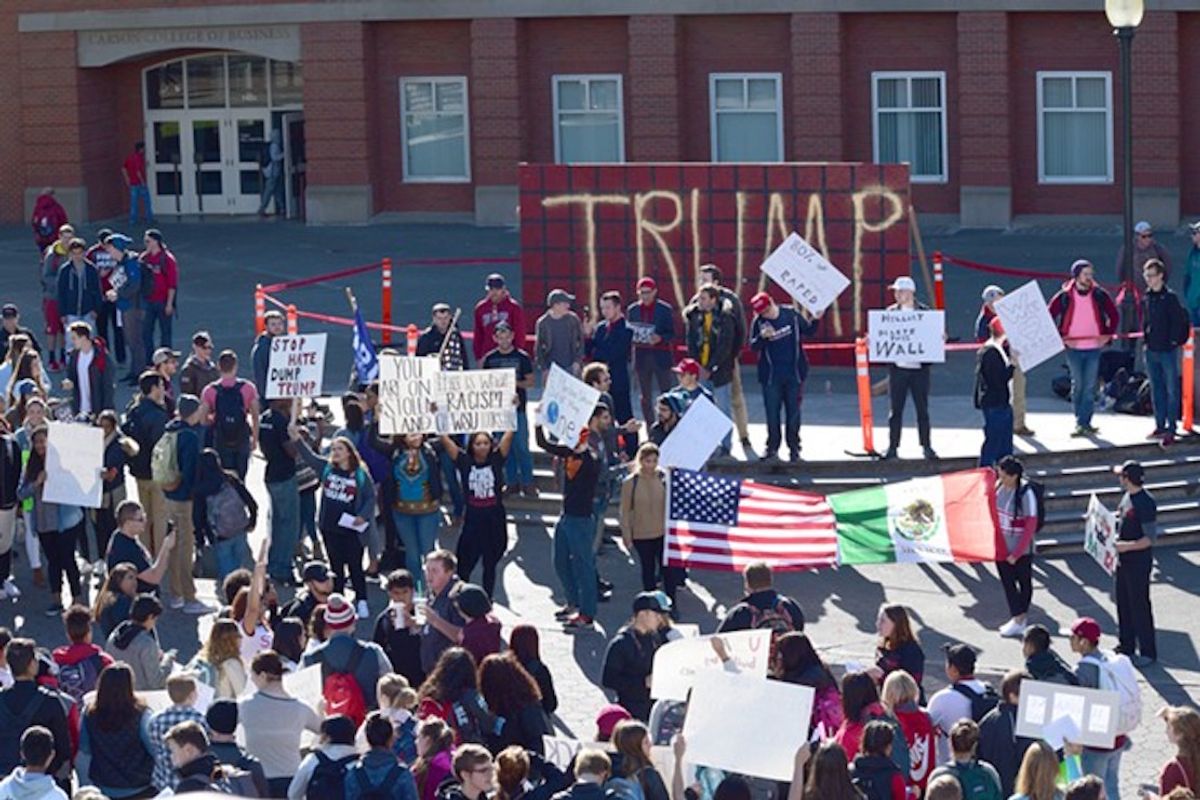 I've been reading a lot of articles and pieces lately that center around Republicans — mainly young, millennial Republicans — complaining how hard it is to be a Republican in today's political climate. The pieces detail Republicans' struggles as they are "judged" on college campuses and ostracized by their liberal peers. The piece also talks about how hard it is to be called a bigot, a sexist, a homophobe, (etc. etc. etc.) because of one's political alignment.

I've just... I'm gonna do this numerical so we can go through and really dissect each argument here.

There you go. My entire argument. No need for the rest of this piece to even exist!

For real though, are y'all kidding me with this crap? You expect me — and everyone else — to feel bad for you? Y'all nominated and elected the most uneducated, ignorant, bigoted, incompetent person ever to lead this country, and now you want to be crying and upset and shouting NOT ALL REPUBLICANS! from the rooftops? No, Becky! That's not how it works!

2. Stop Aligning Yourself With These People


Here's a radical idea: Stop calling yourself a Republican. If you no longer believe in the party, or the people that it's supporting nowadays, then just walk away. It's really not that hard. I really don't align with any political party nowadays because of this very reason. I have no interest in Bernie Sanders and Joe Biden bashing Hillary and telling themselves and anyone who sticks a microphone in their face that they could have beat her — which is a lie, they both tried and lost — and I have less than zero interest in a bunch of old white men thinking that LGBTQ+ rights and reproductive rights are negotiable.

That's why I have become someone who just cares about the issues. And you can too! If you do not wanna be called a homophobe, do not align yourself with the same Republican party that loves Mike Pence, who thinks it's Gucci to send gay kids to conversion therapy. If you do not wanna be known as a sexist, stop saying that you support a party that supports slashing funding for Planned Parenthood, wants to control women's bodies and thinks that Jesus lets women get raped because it's a miracle we should all be thankful for!

Just... stop. Stop saying you're a Republican if you are, in fact, not, and do not want to be aligned with the hateful party that they have become.


So... you may be thinking: But Hannah, everyone's entitled to their own beliefs. And you are absolutely right. If you think abortion is wrong and should be illegal, that's fine. If you think being gay isn't natural or traditional or whatever, sure, go for it. This is America. Believe what you want.

When you, a Republican, want to start dictating other people's lives and freedoms, then we have a problem. Then you are a sexist, a bigot, a homophobe, a xenophobe, and every single thing that you complain about being called because you are one.

But here's the thing: I don't care. And not a lot of people do. Why? Because there's a man in the white house who does believe those things. There are a whole bunch more in the House and the Senate who believe those things. When you say "I'm a Republican!" you become just another one of those people, and no one is going to have any sympathy for you because they shouldn't. You reap what you sow.

There are people out there who live in fear every single day because of the man that you or your party put in the White House. Don't expect sympathy from those people when you or your party helped to put them in that place.


It's OK to have a difference of opinion. I've said it a bunch of times, and I'm sure I'll say it a bunch more. Most of my best friends and I don't see eye-to-eye on everything. And you know what? I love them all the more for it.

Because all of those things are things that are up for debate. You can be on opposite ends of the issue, or fall somewhere in the middle, and still have a valid argument. We cannot have a functioning democracy without two or more valid and debatable ideals.

Gay people are icky and they shouldn't be allowed to have the same freedoms as straight people do is not valid and debatable. See the difference?


By electing Donald Trump and Mike Pence, and allowing them to put Nazis and racists and bigots in their cabinet, and then filling Congress with those same people, the Republican party has become the same as the people they elected. And if you have a problem being called a bigot or a sexist or a racist or anything thing else, look at yourself. Look at your views. Then look at your party.

Then, make a change or live with the consequences.