Your next Fuhrer has arrived. 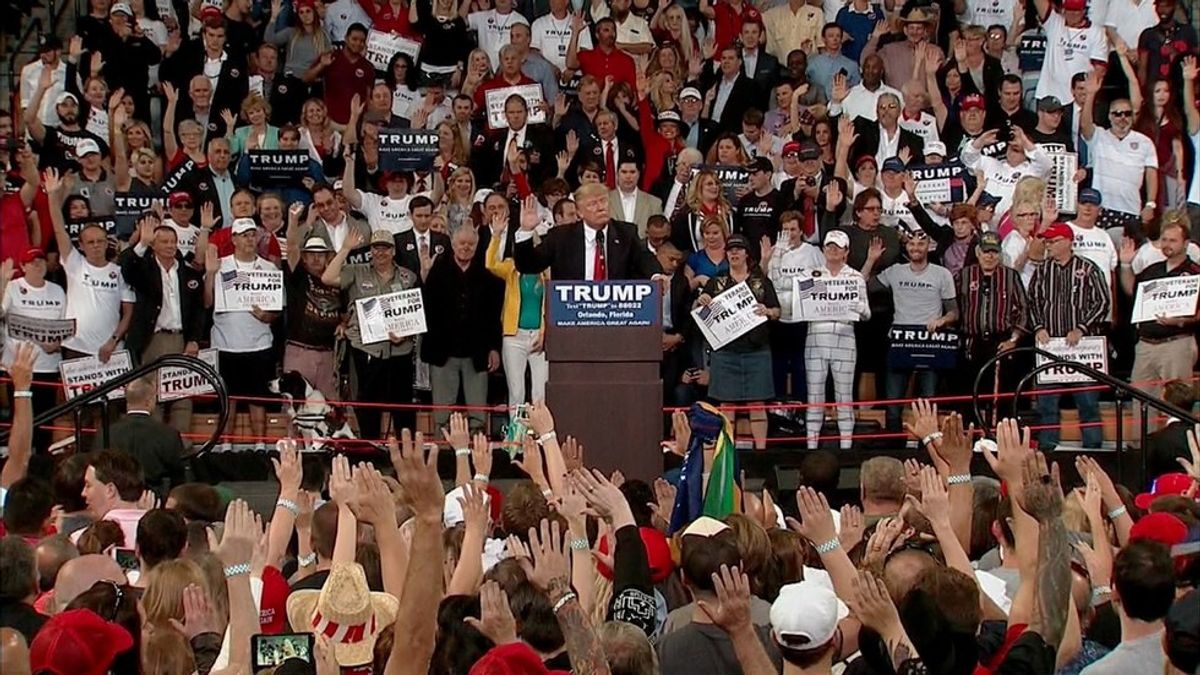 This isn't an exaggeration. This isn't satire. When I equate Trump to the totalitarian fascists of the 1930s and 1940s, I mean that sincerely.

We, as a country, need to stop treating his candidacy as a joke. It's not funny anymore. It may have seemed amusing at first, but people are getting injured at his rallies, and it may only be a matter of time before worse happens.

To those who wonder if Trump can actually be President: yes, he absolutely can. He's well on his way to winning the Republican nomination, and he could win the general election if things go his way. We can't ignore him anymore.

He is the most dangerous presidential candidate in American history. We are talking about a man who is actually suggesting forced deportations and building a massive wall on the Mexican border. He has repeatedly called women "pigs" (among other things).

He has a consistent record of failure. Atlantic City, New Jersey has been bankrupted by Trump's greed, among other factors. He started a college, which he's being sued over, a mortgage company, which opened shortly before the housing market collapsed and the company folded soon after, and wine and steak brands, both of which have done terribly.

He claims to be a "builder" but doesn't actually build anything. Most of the buildings which bear his name have just been licensed by Trump, not built by his company.

He is a pathological liar. Not one of his stories, from Muslims cheering in Jersey City on September 11 to his claims that Bernie Sanders is sending his supporters to Trump rallies to incite violence, is factually correct.

Surely, you already know this. You've either heard it on the news or have been smart enough to figure it out on your own. So why am I writing this?

This is the truly scary part of Trump's campaign. His lies and failures have been public knowledge throughout the campaign. Yet he has gained momentum instead of lost it. Why? Are the American people so stereotypically stupid that they are willing to throw the truth out the window in favor of what they want to hear?

And on that point: is Donald Trump really saying what the American people want to hear? I like to think that the people who elected Barack Obama would not be so filled with hate, but this candidate has proven me wrong. His message of white supremacy is catching on at a national level, which is frightening.

Supporters in Alabama raised their right arms to pledge allegiance to Donald Trump, and my blood chilled. I didn't know if I was looking at 2010s America or 1930s Germany. I'm not just saying this because I disagree with Trump's policies. I'm not so petty that everyone I disagree with is immediately compared to Hitler. But, in this case, if the boot fits, goose step in it.

Republican candidates, namely Marco Rubio and John Kasich, are staying in the race longer than they theoretically should in an attempt to deny Trump a majority of delegates. If Trump doesn't win a majority by the time the Republican National Convention rolls around, there is a chance that someone else could be nominated. Yet all of them said they would support the Republican nominee for President, even if Trump was the nominee. Meanwhile, the two Democratic candidates are spending more time squabbling amongst each other rather than focusing on the real threat.

This isn't to suggest that I dislike primaries; ordinarily, I think primaries are the best way to know who the candidates really are and what distinguishes them from other party candidates. But these are not ordinary times. The greatest evil this country has seen in many years is running for President, and has a decent shot at winning.

The Republican party needs to acknowledge the writing on the wall. They created Trump, through their bigotry and mismanagement of the government. By trying to "make Barack Obama a one-term President", as Senate Majority Leader Mitch McConnell said, Republicans in Congress created an air of gridlock which frustrated the American people. This frustration has boiled over into the acceptance of an outsider candidate as usually bizarre as Trump.

Democrats are not free of blame either. Congressmen on both sides are widely accused of being bought by super wealthy individuals or special interest groups. The people want an alternative to a politician who doesn't accurately represent the average man, and, on the surface, Trump is that candidate. But rather than worry about if Hillary Clinton is progressive enough or if Bernie Sanders' wild proposals are fiscally possible, Democrats should focus all of their energy on stopping Donald Trump.

There are some Sanders supporters who claim that they will not vote if Clinton wins the Democratic nomination. A few weeks ago, I would have counted myself among them. But it's these people who would allow Trump to win. Am I thrilled with Hillary Clinton? No. But she is qualified and has shown a willingness to listen to the more progressive side of the Democratic Party. Sanders is my dream candidate, but if he isn't the nominee, I won't hesitate to support Clinton for President. I would rather elect a candidate that I am not completely enthusiastic about than a racist demagogue. Hopefully, others will come around and realized the same.