The Definitive Ranking Of Big 10 Mascots From Worst To Best

The Definitive Ranking Of Big 10 Mascots From Worst To Best

Purdue Pete faintly reminds me of a horror movie character, but it's fine. 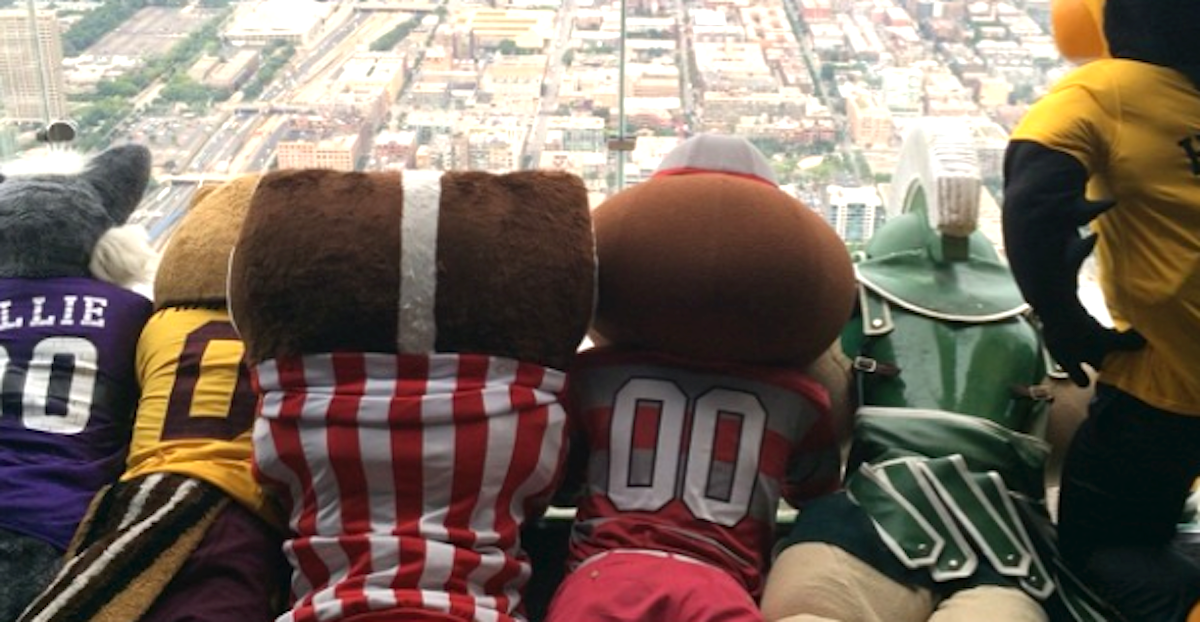 The 2017 college football season was undoubtedly one of the best in history. It featured many twists and turns, with constant excitement along the way.

The Big Ten, though it did not have a playoff team this year, had an extremely successful year, with 8 of its 14 teams receiving a bowl bid, and going 7-1 in those games (thanks, Michigan).

With that success, I decided to take a look at what really drove the conference's great year. My conclusion is simple: the mascots.

Without the mascots, who would be there to cheer on a team like Minnesota? Probably no one. Here it is, the 2018 B1G mascot rankings.

Their mascot is a nut. That’s it. Also, Brutus Buckeye is not appealing to the eye, whatsoever. He looks so awkward, which is the point of the cartoon-y mascots, but he is just hideous. It also would lose every mascot battle, due to his physical inability to fight. Again, he's just a nut.

Apparently, some guy made up the Nittany Lion nickname in the 1900s. It’s not actually a real animal, so it gets docked down. it also looks like something you'd find at a Goodwill or an antique shop, so, it's a no from me.

The Hawkeyes lose because I don't know why it exists. Is it literally the eye of a hawk? Is it like some farm-related thing? I don’t really know, so that really hurts its grade. Herky the Hawkeye is also a bad name for a mascot. Plus, it shares a name with the worst Avenger (Avenger rankings will come separately). It’s still a thousand times better than a Buckeye, though.

Someone from Indiana is called a Hoosier. That’s how Indiana thought really hard and picked themselves a mascot. There are some great people who have come out of Indiana, but it's just not there for me.

Gophers are not really that threatening. Of all the rodent-related mascots in the Big Ten, they clearly come in last place in terms of intimidation, and it just looks wayyyy too happy. Why it smiles all the time, I don't know. Its lack of muscles make it so very weak-looking and less scary than their sports teams, which aren't too scary to begin with. Sorry, Goldy.

Terrapins are a small type of turtle. Not a snapping turtle. Not a Teenage Mutant Ninja Turtle. Therefore, they suck. The name of the mascot is Testudo, which makes me a little uncomfortable, but it's whatever.

Of all the colors that Knights could be, I feel like Scarlet is way too complex— just choose red, black, white, I don't really care... just choose something normal. However, I expected this from Rutgers — they can't do much right.

This shouldn’t be that threatening. Boilermakers are just people trained to make steel things. But think about it: Boilermakers have access to fire and can make swords, hatchets and axes, which are all very unsafe and scary. Also, Purdue Pete faintly reminds me of a horror movie character, but it's fine.

This mascot seems really redundant. This would be like if the Hawaii Warriors were the Hawaii Hawaiians or something. The key here that makes it scarier is that they put the word “Fighting” in front. If it wasn’t for that, they would be at the bottom, but for now, still not as bad as the Buckeyes. Again, it's a nut.

When I think of corn, I don’t think scary. But there is a horror movie called “ Children of the Corn,” where children ritually murder adults in their town to ensure a successful corn harvest, which helps to color my perception of the Cornhuskers.

Also, I think we gotta cut Nebraska some slack. They have to live in Nebraska, which sucks. On top of that, Herbie Husker seems like that genuine, kind, farmer type that we all can love, so I put some respect on his name for that.

The Wildcats would be a better nickname — possibly even top nickname — if it weren’t for one movie. That movie, ladies and gentlemen, is “High School Musical.” No other wildcats will ever top those wildcats. But seriously, wildcats is so overused it hurts. They should be something like the Knights or, really, anything original.

When Wisconsin first became a part of the U.S., immigrants moved here to mine, and they lived in their mines like badgers. Badgers can be super vicious like the honey badger, but badgers are also lowkey super cute. This two-faced personality puts Bucky near the top.

The Spartans, in ancient times, were known for being the toughest fighters in Greece, basically killing their opposition when confronted. I felt the natural need to put them near the top so I wouldn't be attacked by a Spartan. But really, they have to be the most intimidating mascot in the B1G, nobody wants to tango with a Spartan, not even the honey badger.

Jim Harbaugh fits the model of a Wolverine better than anyone in Michigan's athletic program. He's vicious, does not care at all about your opinion, and does what he wants. Not to mention, he's a bit crazy. In reality, Jim Harbaugh is the face of the B1G, some people just don't realize it.