The incredible power of people. 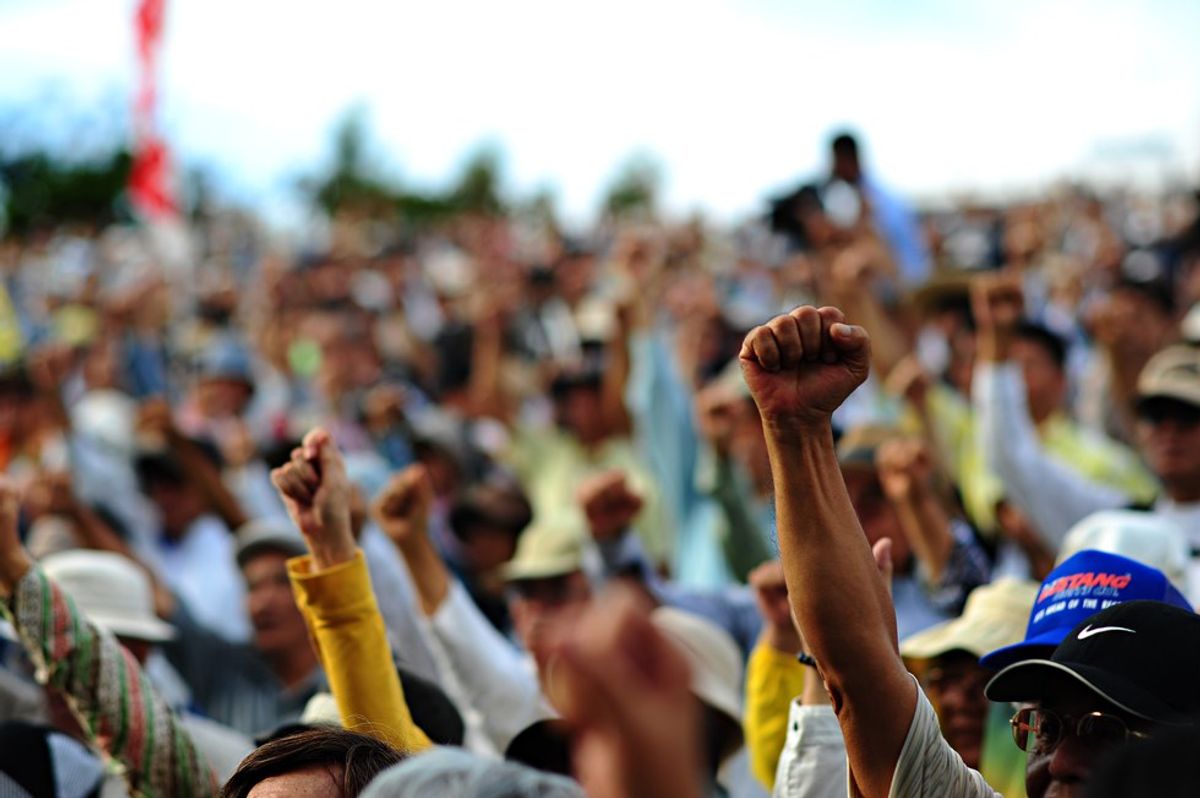 A democracy is defined as "a form of government in which the supreme power is vested in the people and exercised directly by them or by their elected agents under a free electoral system." That means that ultimately, the power lies with the people. We the people have been given a voice in the government and we have the right to exercise that voice in order to create change. This change manifests itself most powerfully when multiple voices come together in opposition to something in the form of protests or marches.

The problem is that as humans, we're pretty adverse to change. It can be scary to stand up for something when everyone around you is telling you that you will fail. For as many people that stand up to call for change, there are twice as many people telling them to sit back down again. But without change, we would never grow. As our former president wisely said, "I am asking you to believe. Not in my ability to bring about change – but in yours."

Protests unite people. Protests raise awareness. Protests demonstrate the incredible power of ordinary people. They give a voice to the voiceless and hold government forces accountable for their actions. So the next time you're feeling powerless against the administration, or the next time you scoff at another protest on the news, remember some of the men and women that came before you and shaped the course of history with their voice. You can thank some of these movements, marches, protests and rallies for the rights that you have today.

The Boston Tea Party was one of the earliest documented protests in America. Back when America consisted of 13 British colonies, the tax on imported goods like paper, tea and paint was extremely high. To protest this tax, several colonists snuck onto a British ship at night and dumped 340 crates of tea into the harbor. This act of protest sparked the American Revolution, which ultimately ended in America's freedom from British rule.

In one of the most famous speeches in American history, Martin Luther King Jr., backed by 200,000 supporters that turned out to the Lincoln Memorial, protested the racial inequality that was keeping African Americans from having the same rights as whites. After his "I Have a Dream" speech in 1963, MLK met with President Kennedy to discuss new legislation to remedy these issues.

In 1913, 8,000 marchers, accompanied by nine bands, 20 floats, and four mounted brigades, gathered in Washington D.C. the day before Woodrow Wilson's inauguration to fight for women's right to vote. It was the first suffrage parade of its kind. Though it took seven more years, the Nineteenth Amendment was passed in 1920, which gave women the right to vote.

What started as a weekly prayer meeting turned into a movement that helped bring down the Berlin Wall. In 1982, a German pastor started a weekly prayer service on Mondays to spread the message of peace in the middle of the ongoing Cold War.

Soon, people from all ages and religious backgrounds began seeking weekly sanctuary in his church. A dozen people grew to thousands of people, despite German officials' efforts to blockade the streets around the church. Right before the wall came down, around 300,000 peaceful protestors gathered on a Monday in late October of 1989. One week later, the Berlin Wall was knocked down, reuniting West and East Germany.

Though the Temperance Movement seems ridiculous today, it was actually quite a powerful and historically significant movement. The idea behind the movement was that by prohibiting the sale and consumption of alcohol, societal crime rates would go down and overall health would improve.

Many different groups lobbied and rallied under the name of the Temperance Movement until the 18th Amendment was passed in January of 1920. The Prohibition lasted for about 23 years until it was repealed by the 21st Amendment in 1933- which you can thank Anti-Prohibition protestors for.

India was still under the oppressive control of the British in 1930. At this time, Indians were prohibited from making or selling salt (a staple in the Indian diet) on their own under the Salt Act and were instead forced to buy it at high prices from the British.

Mohandas Gandhi decided to march with about a dozen people to the coast to make sea salt, which he figured would be a nonviolent way to defy the British and release India from their control by breaking the law. Tens of thousands of people ended up joining his march, and under Gandhi's guidance, India was able to break free from British rule in1947.

7. March on Washington for Lesbian, Gay, and Bi Equal Rights and Liberation, 1993

In 1993, over 800,000 people marched on the National Mall for the rights of the LGBTQ community. They were seeking anti-discrimination laws that would protect citizens from being discriminated against based on sexual identity and an increase in funding for AIDS research. The march helped gain national social recognition for the LGBTQ community. Since then, same-sex marriage has been legalized and great strides have been made in regards to studying and finding a cure for HIV/AIDS.

The Protestant Reformation is a poignant reminder that sometimes all it takes is one spark to start a fire. Martin Luther is widely credited for being the spark that started the Protestant Reformation, a movement that completely upended the Catholic Church and changed the way that people practiced religion on a global scale. One man's voice, in the form of the list of "95 Theses," was enough to create an entirely new religious sect (that literally has the word "protest" in its name).

In 1911, 146 workers were killed by a fire in an unsafe factory. At the time, workers often dealt with extremely hazardous working conditions. The tragedy prompted a march on New York's Fifth Avenue of nearly 80,000 people. This march helped to pass new laws to ensure workplace safety and helped the growing union movement. This eventually led to laws that we still use today, like the minimum wage requirement and the right to collectively bargain as a union.

The goal of the Abolitionist Movement was to end slavery and racial discrimination. It took off in the 1830's and persisted for nearly 40 years. The abolitionists faced constant resistance and opposition from the government, states, and fellow citizens that eventually grew into the Civil War. Finally, in 1965, the 13th Amendment was passed to abolish slavery.

There is some debate as to whether this movement actually helped to end the Vietnam War, but there's no denying the cultural and social significance of the anti-war protesting that happened in the late 60s and early 70s. At first, the protests started in general opposition to the war in Vietnam. But in 1971, when the Pentagon Papers were leaked to the press, the mood shifted. The Pentagon Papers contained about 7,000 pages worth of information on the war that the government had been trying to cover up, which made people angry. This set the precedence for the people's general mistrust of the government and reinforced the important role of the press to deliver the truth to the people.

One of the more violent protests in world history, the Storming of the Bastille occurred in July of 1789. Tired of being ruled by a harsh monarchy, the French people stormed a state prison on the east side of Paris that had become a symbol of the government they despised. A violent battle ensued, which ended in the murder of the governor. This attack marked the beginning of the French Revolution, which ultimately led to the replacement of the monarchy with a republic government. The French still celebrate Bastille Day every year on July 14.