All the things that are great about this great city... it's great. 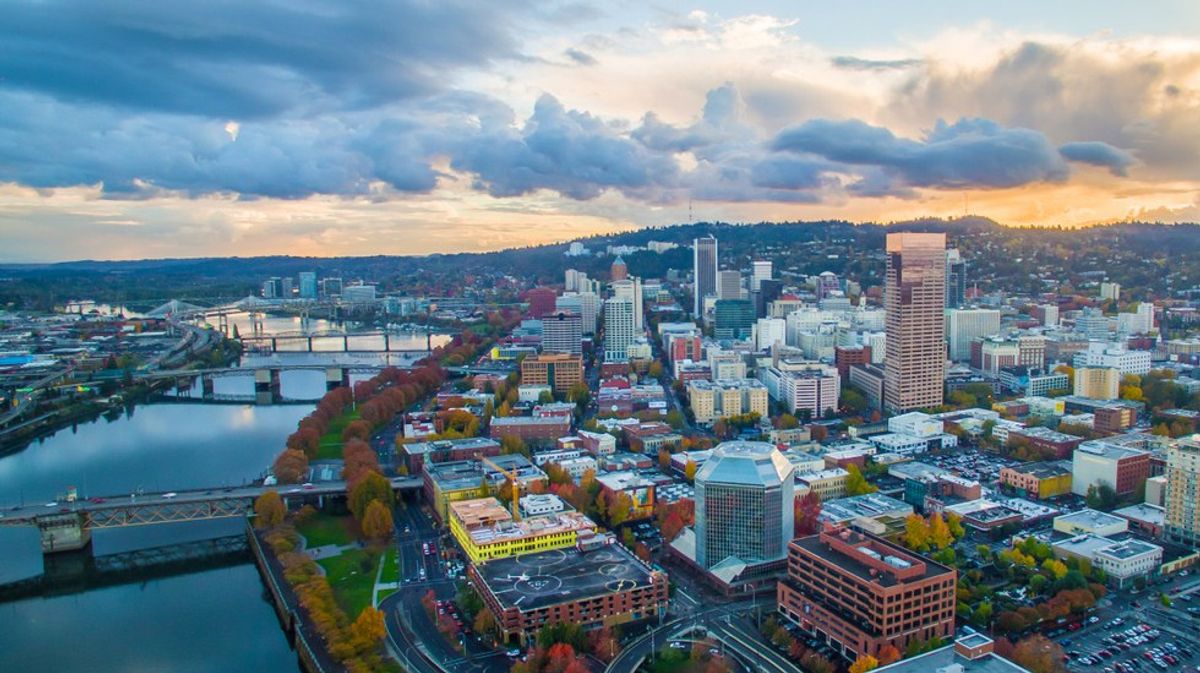 Ah, Portland, the greatest place in the world to live in, and if you don't agree, you're really, really wrong. But don't worry, we're super tolerable to any and all different opinions... expect disagreeing that Portland is the best. I've lived in Portland basically my entire life, and I wouldn't change that for anything. There will never be a dull moment in Portland, and the list of great things about it just keeps getting bigger and bigger. So without further ado, here is a list of Port-things:

No joke, when we pay for something (not just in Portland, in all of Oregon) if it's 4.99, it's 4.99. Imagine, at McDonald's, there's actually a dollar menu, not a dollar and some change menu.

2. We Have Gas Attendants

We sit in our cars while someone pumps our gas. That being said, I know how to pump gas, but I can count the times I have done that on my hands. Oh, and we don't pity the out-of-staters that try to pump their own and get yelled at. That's illegal, you fools.

3. Everyone Here Asks What High School You Went To

I don't know why, but when meeting someone new, a question that normally comes up is "hey, what high school did you go to?" I went to Lincoln, which obviously the best, and any others are nothing compared to it, but basically, as long as you didn't go to Jesuit, you're going to be fine.

4. We Have Really Cool Bridges

From the St. Johns to the newest addition of the Tilikum Crossing bridge, the bridges are all beautiful in their own way. Also, side note for anyone that needs a gift idea for Valentine's or an Anniversary gift, Betsy and Iya make amazing Portland Bridge-themed bracelets.

5. Doughnuts, We've Got Them

Now sure, Portland is known for Voodoo Doughnuts, and yeah they're fun, but when it comes down to it, it is more of a tourist attraction than anything. Go to Blue Star; those are some tasty doughnuts.

With around 99 Starbucks just within Portland, coffee is never hard to find. But, as many will agree, finding a special coffee shop like Water Ave Coffee (pictured above) is much better than Starbucks. Portland loves its coffee, plain and simple.

It rains. A lot. There really isn't a season where it can't rain, but it keeps everything green, so it's all good, Mother Nature.

8. We Have Many Words for Rain

Speaking of rain, we can probably describe it in more ways than anyone, from misting, drizzling and sprinkling, to pouring, showering, and "this is the end of times flooding."

Okay, okay, one last thing about rain. It's never easier to spot an out-of-stater than when it's sprinkling and you're popping opwn an umbrella. Just do what we do, grit your teeth, and point your head down. On the plus side, you really don't have to shower if it's raining in Portland, because nature just takes care of it.

10. Food Carts are the Best

"Where do you want to eat?" "I dunno." Well, now we're going to the food carts. Food carts are a staple of Portland and you can find just about anything at them, as there are around 500 carts in Portland alone. There isn't a type of cuisine that isn't included.

Okay, yeah, "Portlandia" may have gotten more than a few things right, but Portland is full of hipsters, and it just makes for a more interesting society. Like, "cool, that guy's walking a pig on a leash" or "wow, he's riding a penny farthing." It may shock some outsiders, but it's just a daily thing in Portland.

We do host this, that should be enough said, but just to add to that, Portland Monthly (yeah, there might be some bias, but shh) has declared that Portland is "the Beardiest city in America."

We will wear flannels and plaid until we die. This trend will never die in Portland, and it actually goes pretty well with all the beards here.

Nike was born here, so we'll just add another feather in our cap. In addition to this, there is a cutthroat game of asking all your friends whose parents work there for employee store passes. However, even with the discounts, you walk out thinking "How did I spend $500?"

With no NFL team to root for, our attention is turned to the collegiate level when it comes to football. Unless it's the Civil War, most of the time you can cheer for both (kind of), but when the rivalry game comes around, you have to pick a side, no platypuses. (Go Beavs.)

If you thought we were serious about the Ducks or the Blazers, clearly you haven't been within earshot of PGE Park (yeah, I called it that, but Jeld-Wen Field for all of you who don't appreciate history) during soccer season. I have seen Timbers Army tattoos, and everything under the sky be turned into a Timbers-themed item. Timbers (and Thorns) games are some of the best experiences ever. There's only one rule if you're going to be in the Army section: you have to stand and yell the entire game. If you're not going to do that, move to Seattle and become a Sounders fan.

As mentioned before with the food carts, Portland has some amazing eats; you can't really walk around without finding (or smelling) some delicious food. Some personal favorites: Southland Whisky Kitchen on 23rd (shout out to Carson), Reverends on SE 13th (shout out to Chadwick), and any of the Mio sushi places (shout out to Emma). If you want to find something interesting to eat, like cow tongue tacos (Por Que No) or a grilled PB&J with roasted jalapenos, bacon, and cherry jam on challah bread, come to Portland to eat.

Getting to the more adult side of the article, if you happen to be so lucky to be over 21, Portland is known for loving beer and making a ton as well. Now, I was told that the best beer is a free one, but one from one of the 65 breweries in Portland can't be that bad either. Yes, 65 breweries in Portland alone, which is why we have more breweries than any other city in the world.

Also if you're over 21 there are "other things" that are now legal in Oregon.

Can't say much about this, but Portland has one club for every 9,578 residents, making it the leader in America for strip clubs per capita.

To go along with our flannels and beards, many people also like to adorn themselves with inks of many colors. With plenty of places to go to for tattoos, Portland is a great spot to get your pieces done. My favorite place is on 24th and Alberta street called "Freaks and Geeks Tattoo," so special shout-outs to Jason and Brendon.

There are many art museums in Portland. The art community has continued to grow, and is increasing rapidly as you read this. We even have this cool day called "First Thursday" where every first Thursday of the month, all of the galleries and museums are free to look at (a great idea for a date night).

Portland is a great town for dates of all sorts. You want to go a little more formal? Go to First Thursday or a play at the Schnitz. You want a little more playful? Zoolights or Glowing Greens never disappoint.

Easily one of the best things about Portland is the Saturday markets, scattered all throughout Portland. Saturday is a perfect day to go walking through Portland, stopping at a market, getting some great food, supporting small businesses while buying whatever food you need, and listening to some great music. There aren't many things better than the Portland Saturday Markets.

There are so many different hikes you can take it's ridiculous. We pride ourselves on finding the "off the beaten trail" hikes, but in all reality, even doing the hikes that you know you'll probably see someone you went to high school with on are just as fun.

Overall Portland, Oregon is a place to call home (unless you're moving here from California). I barely scratched the surface on why Portland is the best city in America, but you can get where I am going. We are the city of roses, loud and proud, and I am so thankful that I grew up in such a beautiful, welcoming place. There's really only two things to say about Portland, and those are:

Rose City 'Til I Die

Nicole Marie Nigro
Individual Creator
7255
c1.staticflickr.com
Where to start...... Let me start with the cliche that life throws us curveballs and what we do with it is what counts.