October: The Month of Sports

A recap of sports in October, the month every major sport is in play. 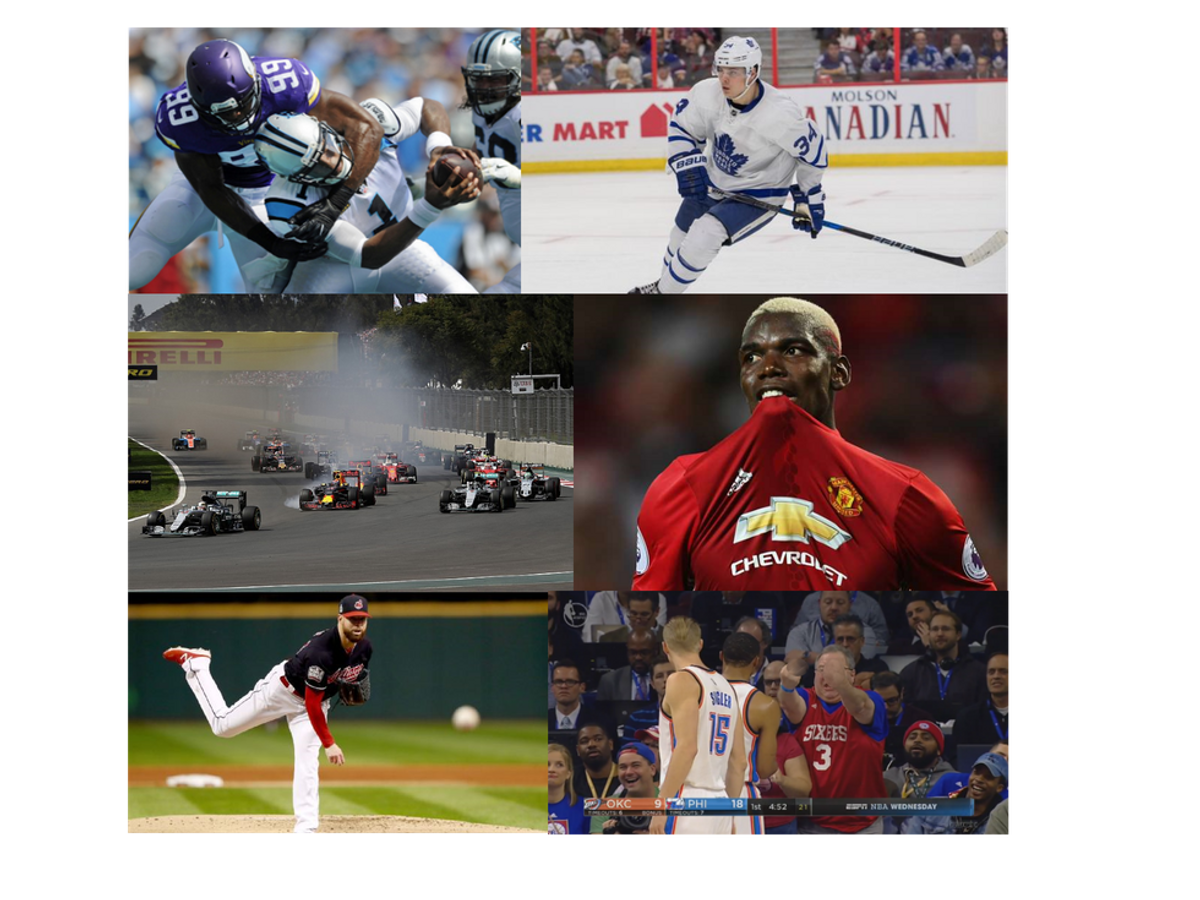 There are many reasons to enjoy the month of October: the return of fall, Halloween, it's one month closer to Christmas and the end of the first semester; there's a lot to like about October. If you're a sports fan, then there's pretty much everything to love about it. Basically every major sport is in play, whether starting their season or wrapping it up, and everywhere in between. Here's a recap of what's happened this month alone in the world of sports.

Here in the states, the MLS finished up their regular season and are right in the middle of their playoff bracket. The MLS has largely stayed the same, with the use of older, popular, international players to bolster ratings. Ironically, these players' apathy on the pitch oftentimes may result in more views, but a much-diminished product on the field. In the rest of the world, soccer has just begun, and we're finding out where the teams stand as they work their way through the round robin matches. In the English Premier League, Manchester City is back to a hot start, while their counterpart in United are struggling to turn the money spent on players into good results. Last year's champions Leicester City are in the middle of the table, and all the usual suspects are right where we expect them to be.

The NHL opened their season in October to a massive night for rookies. First overall pick Auston Matthews scored four goals in his debut, but in typical Toronto Maple Leafs fashion, the team lost in overtime. The rest of the young guys have also shown up, with other rookie Patrik Laine with 5 goals so far this season, and young captain Connor McDavid leading in points. The start of the season has also brought on some interesting stats from multi champ Chicago Blackhawks, who have only killed half of their penalties (for reference, penalty kill percentages on average are in the mid-eighties) and whose leading goalscorer is the unlikely Richard Panik. There's much more to discuss about the league's start, but we'll save it for an update later in the season.

I haven't watched much football the past few years, but my team in fantasy football has given me a reason to. October has been the month of international play, as the NFL played three games in London this month, and will have another in Mexico later in the season. Many of the teams we expect to be winning or losing have been, well winning and losing. But we are seeing some really great play from unlikely quarterbacks. Sam Bradford leads the Vikings, who through exceptional defense and consistent offense find themselves tied for the lead in the NFC. The team they're tied to, the Cowboys, are led by a backup quarterback, Dak Prescott, who has been unstoppable so far. In the AFC, the Patriots played musical chairs with their QB's during Brady's suspension, but never skipped a beat, and are on top of the conference. The Broncos and Raiders(?!) are right behind, and if you were wondering, my fantasy team has been doing pretty well too.

The NBA season is in its infancy and we won't really know how things will shape out this early in the season. We have seen some interesting stories already, one being a Sixers fan flashing double birds to OKC's Russell Westbrook. The warriors will be pressed to win it all this year, with the addition of Kevin Durant. But you can't count out anyone, especially LeBron and the Cavs.

The MLB is wrapping up its postseason with a matchup of two franchises eager to take home the pennant for the first time in a long time. The Cleveland Indians and the Chicago Cubs have played 5 games so far, and the Indians currently hold the lead 3-2. It's been an exciting battle of the bullpens, with Cleveland running a smaller rotation, and with the Cubs finally able to use their closer, Aroldis Chapman to his fullest extent Sunday night, when he blazed 100+ mph fastballs over the course of just over two innings. No matter the result of the following games, one fanbase will get the title that they have been searching for for such a long time.

For those who don't follow NASCAR, the thought of a postseason might be a little strange. But the Chase is on, and for what it's worth, it's been exciting. 16 drivers start the postseason (with each race fielding a normal set of around 40 drivers), and by either winning one of the three races that round, or by accumulating enough points, they move on to the next round. Jimmie Johnson took home the victory in Martinsville this weekend, putting him in the final four. With two races and three spots up for grabs, there's bound to be some action.

Down south, Formula 1 hosted the Mexican GP this weekend. While the championship (and basically every podium) is all but locked up between the two Mercedes drivers, Nico Rosberg and Lewis Hamilton, third place was up for grabs. What we saw on the last lap on Sunday was an absolute spectacle, with drivers locking up brakes, sliding off track, and jamming each other on the turns. What resulted was the third place finisher on the track, Max Verstappen, was penalized and fell to fourth, leaving Sebastian Vettel to take the spot, until he too was penalized, dropping him into fifth place. That put fifth place finisher, and shoey machine, Daniel Ricciardo into the official third position for the Grand Prix.