Get to know just how amazing these women are (and yes, there are videos). 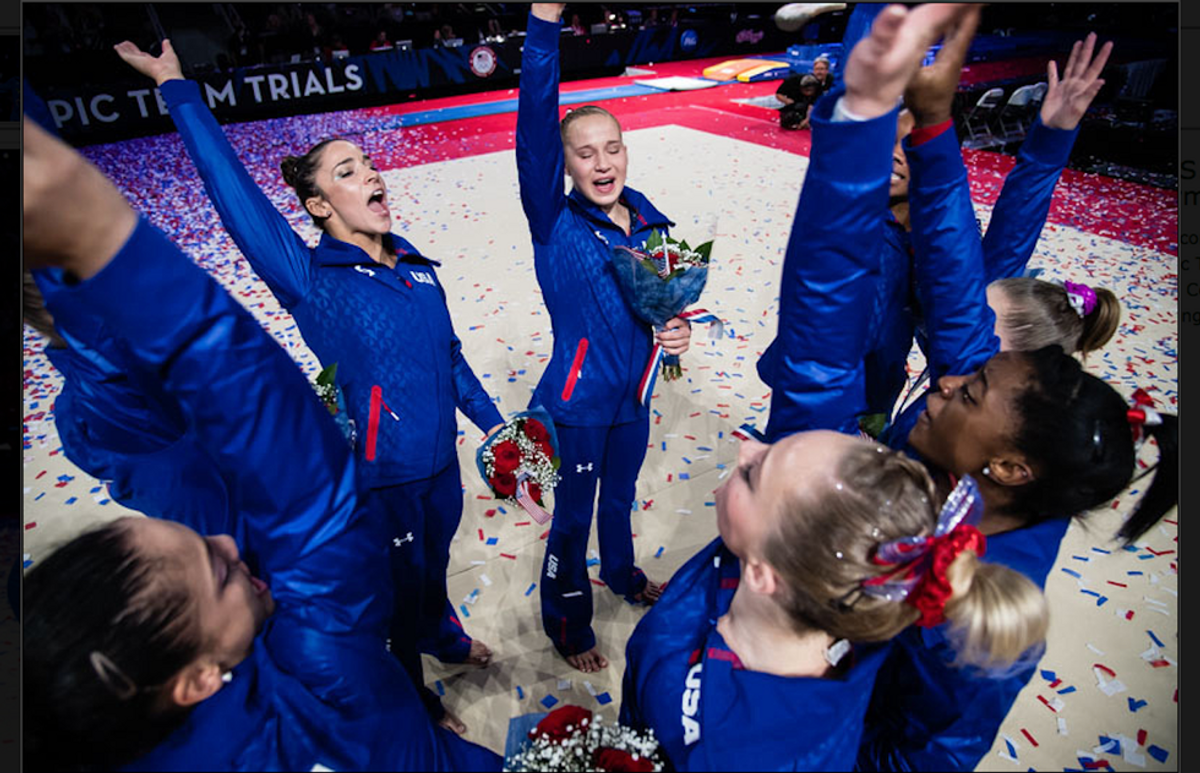 Let's talk about women's gymnastics for a moment. In case you're not familiar, there are four events female gymnasts compete in: uneven bars, balance beam, vault, and floor routines. They are expected to combine athleticism with artistry, more so than male gymnasts. And when you have the best of the best competing with each other, it's crucial to have a team that excels in just about everything.

The US Team Olympic Trials took place on Friday, July 8th, and Sunday, July 10th. Over those two days, many qualified gymnasts flipped and twisted and wowed the enormous crowd in San Jose, CA. Commentator and former Olympic gymnast Nastia Liukin mentioned that there were enough qualified gymnasts to send two teams to the Olympics and place first and second in Team finals. Alas, only five of those amazing gymnasts could be picked for the official USA team, with three alternates. With the Rio Olympic Games just around the corner, it's time to know just how the US Team will bring home the gold:

Why she was chosen: Simone Biles is a firecracker right now. She's already been referred to as one of the best gymnasts and athletes in the world, and she hasn't even gone to Rio yet. Simone Biles rarely makes a mistake, even when she has some of the most difficult routines in the competition. Her consistency seriously impressed the Olympic selection committee. She's a three-time world champion, a four-time national champion, and the expected winner of the all-around Olympic gold medal.

Why she was chosen: After almost winning a bronze all-around medal in the 2012 London Olympic Games, Aly Raisman is back and more determined than ever. Like Simone Biles, she is very consistent with her strengths, especially her floor routine. Her first tumbling pass in that shows off six skills, which is both impressive and exhausting. Aly Raisman brings in physical and emotional strength to the team, as her previous experience with the Olympic Games gives her a leadership role.

Why she was chosen: Newcomer Laurie Hernandez performs like she's a veteran pro. This year is her first as a senior gymnast, but she has consistently proven herself to be incredibly talented and strong. Her spirited floor routine is a crowd (and judge) favorite, as she combines character acting with extreme athleticism. Laurie Hernandez also excels on the balance beam, with perfect poise and confidence. She is the first Latina gymnast to be on Team USA in 30 years, and is very proud to be representing her community.

Why she was chosen: Anyone who watched the London Olympic Games knows who Gabby Douglas is. The 2012 all-around gold medalist returns with Aly Raisman for another chance at proving that she is one of the best gymnasts in the world. Although she's been a little shaky at some of the recent national championships, Gabby Douglas landed a spot on the USA Team for her her vault and her uneven bars routine. Her strength on the uneven bars is particularly important, since that is an event Team USA most needs help with. The focus she brings to her routines will be a tremendous help to the team in the Rio Games.

Why she was chosen: Madison Kocian was one of the world champions for the uneven bars, and she proved her skill to the selection committee. During the last few national competitions, she and Ashton Locklear were essentially neck-in-neck when it came to the uneven bars. However, Madison Kocian is able to contribute to floor and balance beam as well, making her a more well-rounded candidate than Locklear. She's very graceful on the uneven bars, a skill not always found in the strongest gymnasts.

Why they were chosen: All three of these ladies have one or two events in which they excel. MyKayla Skinner had one of, if not the, most difficult vaults of all the Olympic trial hopefuls. Ashton Locklear consistently soars through the uneven bars, almost beating Madison Kocian for the spot. Ragan Smith's floor routine to the Addams family theme is only outshadowed by her apparent ease on the balance beam. However, the Olympic selection committee chose the other gymnasts for their versatility, even though some of these athletes had better scores. Should one of the five members of Team USA be unable to perform at the Olympic Games, these women are ready to step in.

Caitlin Marie Grimes
University of South Florida
10525
Beyond The States