A Lockean Analysis Part 2: "Stranger Than Fiction" Shows Freedom Of Choice Will Fail Self And Society With A Lack Of Balance

When a person finds a balance between individualism and assimilation, s/he learns how to serve his/her own interests but also serve society, positively. 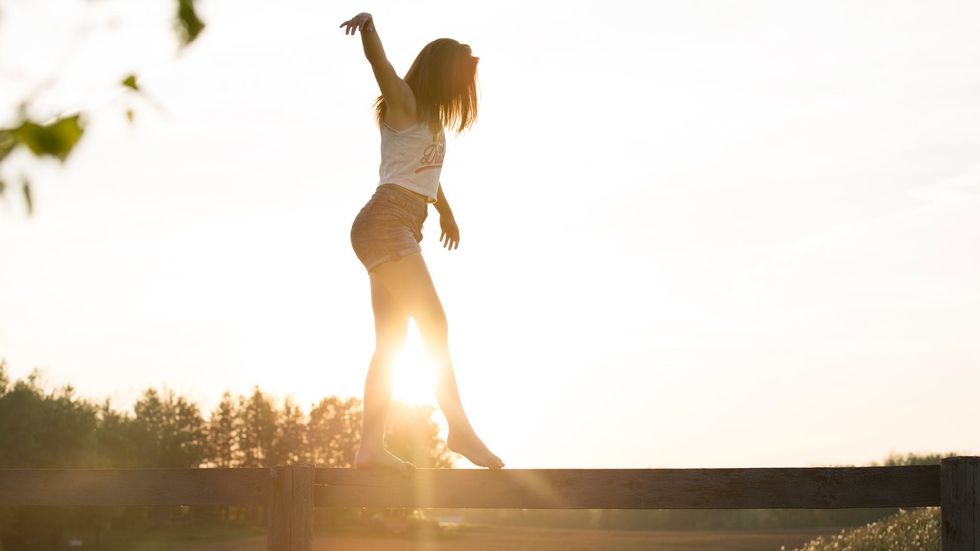 Before reading part two, make sure to check out the introduction and background research in part one here!

It is only after a person realizes that the enjoyment of life, while it goes hand-in-hand with death, without considering the consequences with death, can allow a person to truly live life to the fullest enjoyment, and s/he accomplishes this by finding a balance. A person's identity is unique to his/herself; one would consider it as individualistic because his/her identity is true to his/herself. Being too individualistic can also cause chaos in society, which is why there must be balance between the individualism and assimilation into society (Boaz, 2011). Not everyone can do as his/her heart pleases which is why humans have a higher authority, like a government, to set rules and laws into place, creating certain boundaries a person cannot pass and having humans assimilate into a peaceful society (Boaz, 2011).

Humans choose to live in fear of death and what will come with death, they lose other parts of their identity due to this fear. Now a person acts in the name of what will happen to him/her during death which raises the question about how individualistic this is. Individualism stresses the actions a person takes in the name of his/her individual being and his/her own interest (Lukes, 1998). If a person's entire life revolves around reaching greatness in death, the individualism in this case in subservient to death. While it is pertinent to an individual and what happens to them, it does not reflect individualism in life because his/her interests and enjoyments during life are not met. For the sake of moral being and a mundane routine, humans choose to assimilate into a peaceful society and follow set rules and laws, believing that living a peaceful and quiet life will cause them to avoid any trouble in the future.

Using this thought, humans waste away in a mundane routine, avoiding true pleasures, again, because they fear death and what will come with it. There is more assimilation then individualism because the individualism does not really relate to life, and humans assimilate because of what could happen. There is not a proper balance because of that fear and need for a greater death, stopping people from truly enjoying their life. If a person finds a true individualism in his/her life and does actions that serve his/her interests in life, it is another step towards making life worth it. If people assimilate for the sake of routine and fear of what could happen, it is a step away from making life worth it. Assimilation must be done for the sake of living in step with one another but it should not take away from a person trying to live his/her life to its fullest, so there has to be a balance.

By being able to accept the idea of death and moving past it, there is a connection between the creation of personal identity through experience and life's balance between assimilation and individualism. When a person finds a balance between individualism and assimilation, s/he learns how to serve his/her own interests but also serve society positively. It creates an overall positive environment because the person is happier and more fulfilled as s/he serves his/her own wishes, but also fulfills society's needs in order to remain a peaceful community by following through on laws and rules (Boaz, 2011). The experiences a person faces while finding this balance between individualism and assimilation is what leads to the creation of a more clear, stable and happier personal identity.In "Stranger Than Fiction," the main character Harold Crick is spending his life according to a strict routine, in the beginning of the movie; he brushes his teeth a certain amount of times and eats the same breakfast everyday (Doran & Forster, 2006).

The experience of falling in love causes him to be happier and even forget about dying for a portion of the movie; regardless of tragedy or comedy, he eventually realizes his life will come to an end, whether it is an untimely death or not (Doran & Forster, 2006). Being able to go after Ana and successfully creating a happy relationship means he is content in life even though he knows he will die soon (Doran & Forster, 2006). He knows what is coming and in the beginning, he is completely fearful of what could happen but eventually he realizes that he should not spend his entire life trying to avoid it or live in fear of it; rather planning his entire life around the possibility of an untimely death, he partially accepts it and begins to live life to its fullest (Doran & Forster, 2006). This one experience changes how he experiences the rest of life which affects his personal identity (Doran & Forster, 2006). He is no longer the mundanely, boring man who lives according to one routine; while parts of him may be the same such as his awkwardness just as he remains partially assimilated to society, parts of him have changed such as his new-found love for music due to his individualism surfacing (Doran & Forster, 2006).

Overcoming the concept of death helps a person find a balance between assimilation and individualism, causing someone to change his/her perspective on how s/he experiences moments in life and eventually, affect his/her identity as a whole.