More than 800 around the world. 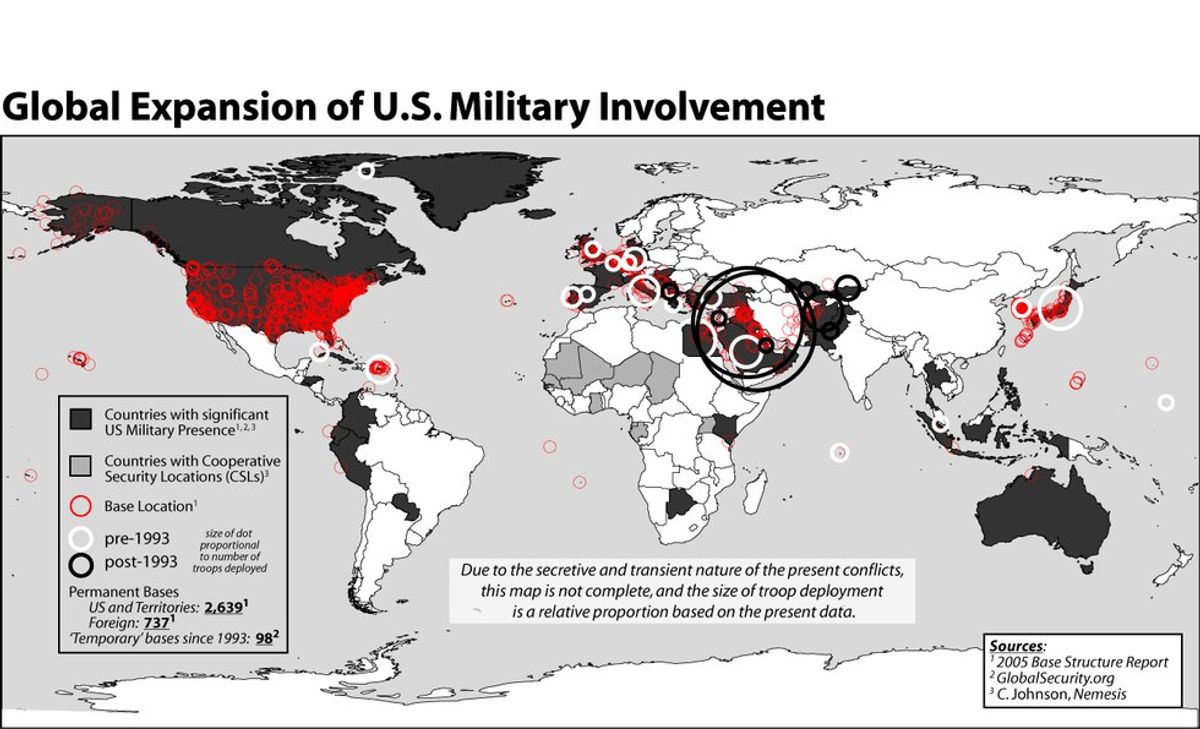 American citizens who are aware of the bases are told that they are vital for global security and worldwide peace, but as author David Vine points out, other countries having military bases in the United States is an unthinkable idea to which the majority of Americans would object to. The more than 800 military bases have an estimated cost annually of more than $156 billion. The bases can be home to drones, surveillance aircrafts, prepositioned aircrafts and supplies, training areas, nuclear weapons installations, missile testing sites, and many other functions. Despite the fact that World War Two ended more than fifty years ago, the United States still kept bases in countries such as Japan and Germany.

So how did these military bases start? F.D.R authorized them in 1940, when he signed a deal with Great Britain which gave Britain U.S. Navy destroyers in exchange for British naval and air bases. By 1945, the U.S. was constructing about 112 military bases a month, and by the end of WWII, the United States had a global network of more than 5,000 bases.The bases established close to the Soviet Union during the Cold War were seen as a way to contain the expansion of Communist ideas, but despite the fact that the United States was the only hegemonic power after the Cold War ended, the U.S. did not pull back on its' establishment of military bases.

One the most infamous U.S. Military bases is on the island of Diego Garcia, a tiny island in the middle of the Indian Ocean. In 1966, deals between the United States and Britain led to the forced displacement of the local population of Chagossians who inhabited the island. The Chagossians were sent to Mauritius or the Seychelles. They lost their right to their belongings and their right to live in their own country. The U.S. even went as far as to shoot all the dogs who lived on the island and were pets to the Chagossians. Right now, the military base contains billions worth of military aircrafts, bombers, nuclear submarines, tanks, weaponry, and ammunition.

Diego Garcia is unfortunately not the only place to have been violently taken over by U.S. troops for the installation of a military base. Today, there are more than 250,000 troops on U.S. Foreign bases worldwide. Both political parties are supportive of the bases. George W. Bush declared that the bases for vital for maintaining "the peace" and President Obama stated that American bases are vital since the U.S. requires a "global security posture."

These bases are highly expensive to U.S. taxpayers and highly profitable to private companies, such as DynCorp International, which work to build the foreign bases abroad.There is also a history of violence on the bases, including GI crime against civilians, US troops committing acts of rape against civilian women in the countries which they are stationed, and displacement of locals to establish the base, like in Diego Garcia mentioned above. Bases can also incite radicalism and Anti-Americanism. Vine writes that "the presence of bases near Muslim holy sites in Saudi Arabia was a major recruiting tool for Al-Qaeda and part of Osama Bin Laden's professed motivation for the September 11, 2001 attacks."

Foreign bases can also provoke war in the sense that if the U.S. already has a military presence abroad, it begins to seem like a sensible and not too difficult option to apply that military presence when necessary. Anthropologist Catherine Lutz puts it this way: "When all you have in your foreign policy toolbox is a hammer, everything starts to look like a nail."

800 military bases abroad seems extremely excessive. The fact that many Americans don't know that they exist demonstrates the government's attempt to police global security and world affairs through military power while trying not to incite the ire and questions of the American public.