She led Team USA to Goalball Gold in 2008 and hopes to repeat this September. 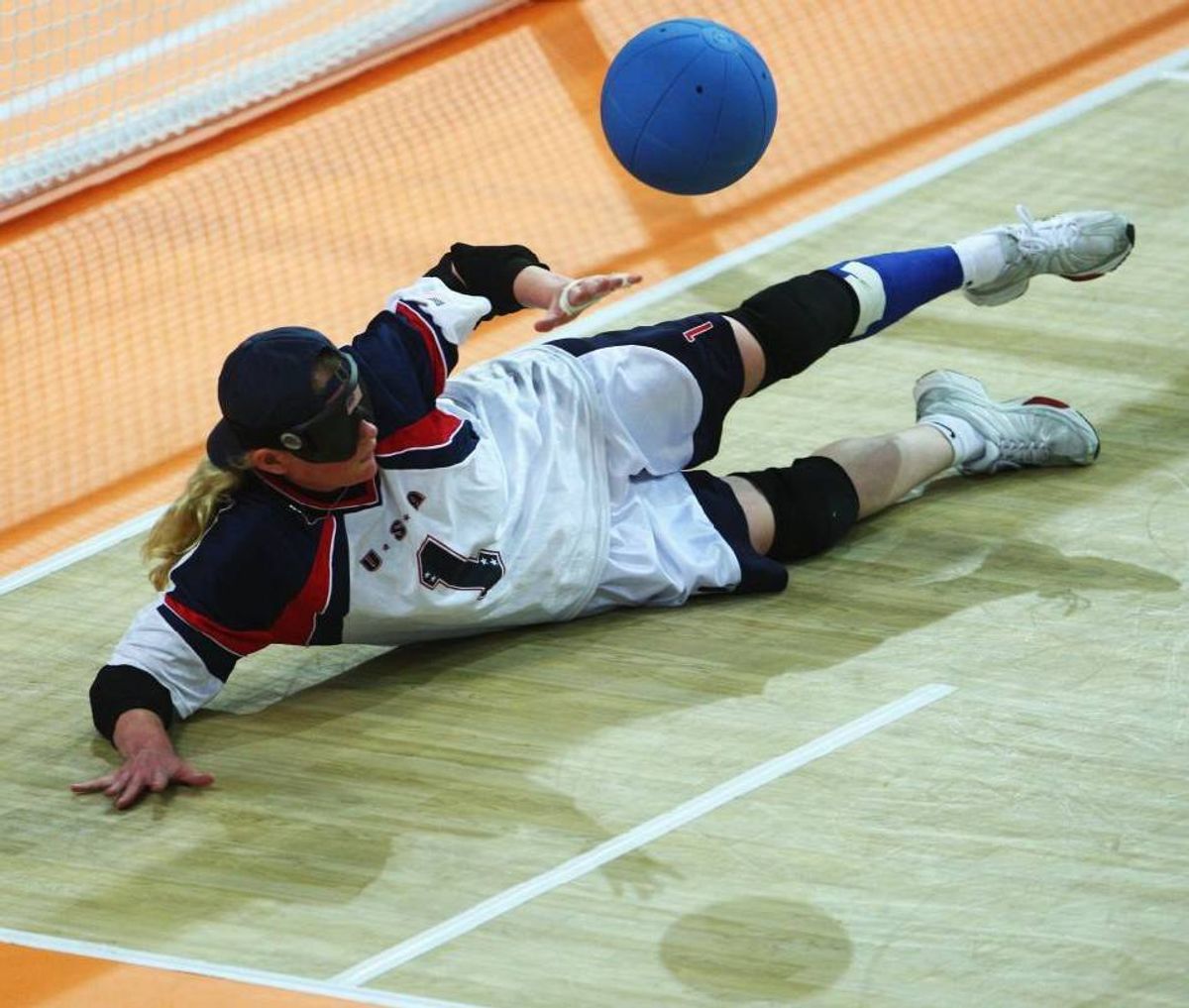 Last week, I published an article about the amazing and intriguing sport of Goalball. Goalball is played by blind and vision impaired athletes and is featured in the fast approaching Rio Paralympic Games. I reached out to Jen Armbruster for the inside perspective into the sport.

How did you first get involved with adaptive sports and goalball?

Well I was playing basketball, softball, soccer etc. and the summer of 1989 is when I started having vision issues while I was on the softball field, it went one eye at a time and that summer was the summer before my freshman year. So I played volleyball limited as a server only as I could not follow the ball well enough at that point as both eyes were effected at that point. Then basketball season rolled around which was supposed to be my ticket to college. I had only [peripheral] vision in my left eye that was usable. I was still playing competitive basketball and they wrote a story around Thanksgiving time about me being legally blind and still playing B-ball. A local teacher at the school for the blind looked me up in the phone book and asked if I wanted to play Goalball. So my father and I went down to check it out one weekend as the school happened to be in Colorado Springs and we lived right there. I never attended the school for the blind but they gave my father and I a key to the gym and we practiced on weekends as well as my parents bringing me downtown after basketball practice to play with other VI (vision impaired) kids from the school a couple of days a week.


I would say the training as far as physical and mental training is very much the same. The dedication and commitment to training both on and off the court is the same. Some of the specific skills are totally different as you are working on hand-ear coordination versus eye-hand coordination in most sports. Also the communication on the court is totally different then in other sports. You can only communicate at certain times and for the most part it is verbal communication only as we won’t see the eye to eye communication that you see in basketball or other sports when you want a teammate to do something different.

Also the coach/player communication is different as well as they can’t just coach the entire time, just during breaks in play.

You've competed in several Paralympic Games, which was your favorite and why?

This is always a hard one for me. Barcelona is special as it was my first one, but Beijing was magical as it truly was a fairytale. It started when I was elected flag bearer for the opening ceremonies, so to lead team U.S.A. into the Olympic stadium was amazing and very humbling. Then we were in must-win situations towards the end of pool play and then of course semis and finals etc. Two of my teammates and I who had been together since the 2000 games played every minute of the last 5 matches, culminating in the gold medal match against China where we came out on top 6-5 and got to hear our national anthem being played and our flag being raised. It was incredible especially after coming up short in Athens four years before finishing with the Silver and 5 of the 6 of us were returning from the 2004 games.

What are you looking forward to most in the upcoming Rio Paralympics?


I think mostly our team wants to defend our World Championship title from 2014 and also have a better showing then we did in London. Again four of us are returning from London and we would like to medal and redeem ourselves a bit. Also it is the last games for three of us it looks like who have been together since 2000.

There is a huge support group out there with shared experiences both at the different level of competition for sure. Also it is the area in which I work and volunteer. I have been in the world of adaptive/inclusive rec and sport not only as an athlete but as a coach and mentor as well as a professional. I have been working in the field since 2000.

In the same way, what steps do you think the adaptive sports community and goalball communities need to take in order to grow?

Well I think just getting more coverage of Paralympic sport is huge. There are still a lot of folks out there that just don’t know about it at all. I think increase coverage is huge for not only the competitive athlete but by increasing coverage then more folks know about opportunities that exist for their kids, brothers, sisters, parents etc. Therefore getting folks active in general and just living a healthy active lifestyle is huge.

I also think for example goalball, wheelchair basketball, etc. are just sports, so invite folks to play and compete with us.

For example I run a college tournament for Goalball and both sighted and blind play. We just see it as a sport. I cannot ask for equal access to gyms and P.E. at the same time excluding folks from my sport. So again I’m a big fan of including folks especially in our sport of goalball. It is a small population of folks that play and often there are not the numbers for teams, so why can’t your friend, brother or sister play with you? It just makes sense to me.

Huge thanks to Jen Armbruster for lending her knowledge and perspective into this amazing sport. I think this will give people a deeper understanding of what they will see this September and on a greater scale in the future.

I will comment in this (and all my other articles) when schedules and livestreams become available for the Rio Paralympic Games!