In The Bottom Of The Tenth 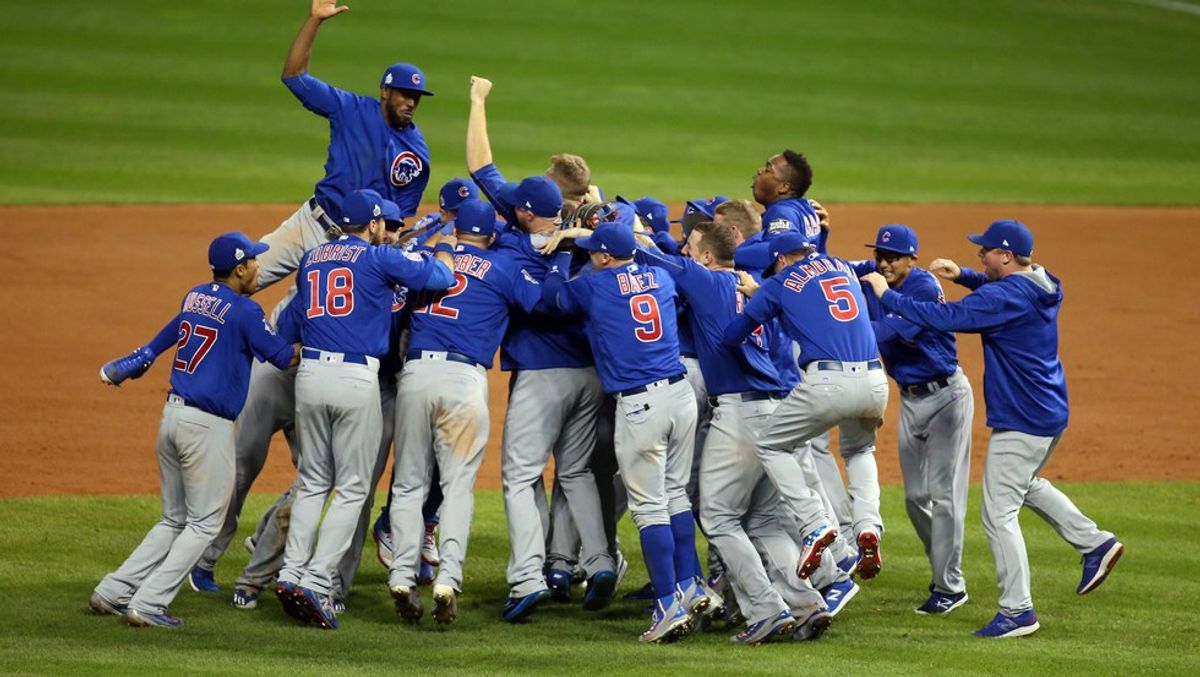 On an unusually mild and profoundly rainy night in early November, a curse of monumental proportions was lifted. This curse was lifted off of the backs of men, women, and children who had waited decades, generations, lifetimes - many of whom waited until their dying breath - to hear a phrase left unsaid for over a century...

After having watched nine increasingly intense innings of what was undeniably one of the best World Series Game 7s in years, the floodgates of Heaven opened. And like any other perfectly-timed cinematic masterpiece, it gave a much-needed intermission to the whirlwind of tension on field.

Knowing the game was tied after nine innings - six runs apiece - it was inevitable this game would be heading to extra innings once the rain ceased.

With that knowledge at the forefront of everyone's minds, for 17-minutes, the baseball-viewing world stood still.

Children gripped their parents' hands tightly, the elderly furiously prayed their rosaries, and the people who illegally placed bets on the outcome of the game shook in their ill-fitting chinos.

Much like waiting on test results to see if you really studied hard enough to pass your MCAT, the pressure from waiting for the conclusion of the most intense baseball game ever proved to be nearly unbearable.

As the tarp was finally lifted from the still-soggy ground, a collective sigh of relief - no - a sigh in preparation - echoed throughout the country. God's ears rang from the prayers, threats, promises, and foul language sent His way, and still managed to clear the skies enough to finish the game.

It was now the top of the 10th inning and the Chicago Cubs were at bat.

Like magic, second baseman Ben Zobrist hit a go-ahead double, soon followed by catcher Miguel Montero's RBI single, bringing the Cubs up to an 8-6 lead. With the Cleveland Indians having the last at-bat and a final opportunity to tie - if not win - the game and the World Series as the home team, breaths remained held.

Now, the Indians were at bat. Immediately, outfielder Rajai Davis hit a single, scoring another run for the "tribe".

And with closer Mike Montgomery at the mound, the only thought going through the city of Chicago's mind (and pretty much the entire nation, sans Cleveland) was for Montgomery to finish the game strong and bring the sweet feeling of victory back home.

The Indians' last hope stood at home plate; a jack of all trades, Michael Martinez was up at bat. With two outs and only one chance left, Martinez's bat made contact with the ball...

Suddenly, like magic, this patient, faithful, incomparable group of people who had waited for what seemed like an eternity, bleeding Cubbie blue since the beginning of time FINALLY heard the phrase they had been waiting their whole lives to hear:

THE CUBS WIN THE WORLD SERIES!!!

And no, it was not a dream.

Nicole Marie Nigro
Individual Creator
8446
c1.staticflickr.com
Where to start...... Let me start with the cliche that life throws us curveballs and what we do with it is what counts.