Hey Colin Kaepernick, There Are Other Ways To Stand Up To Injustice

Hey Colin Kaepernick, There Are Other Ways To Stand Up To Injustice

How dare you disrespect the flag of the country that allows you free speech and to play football for a living. 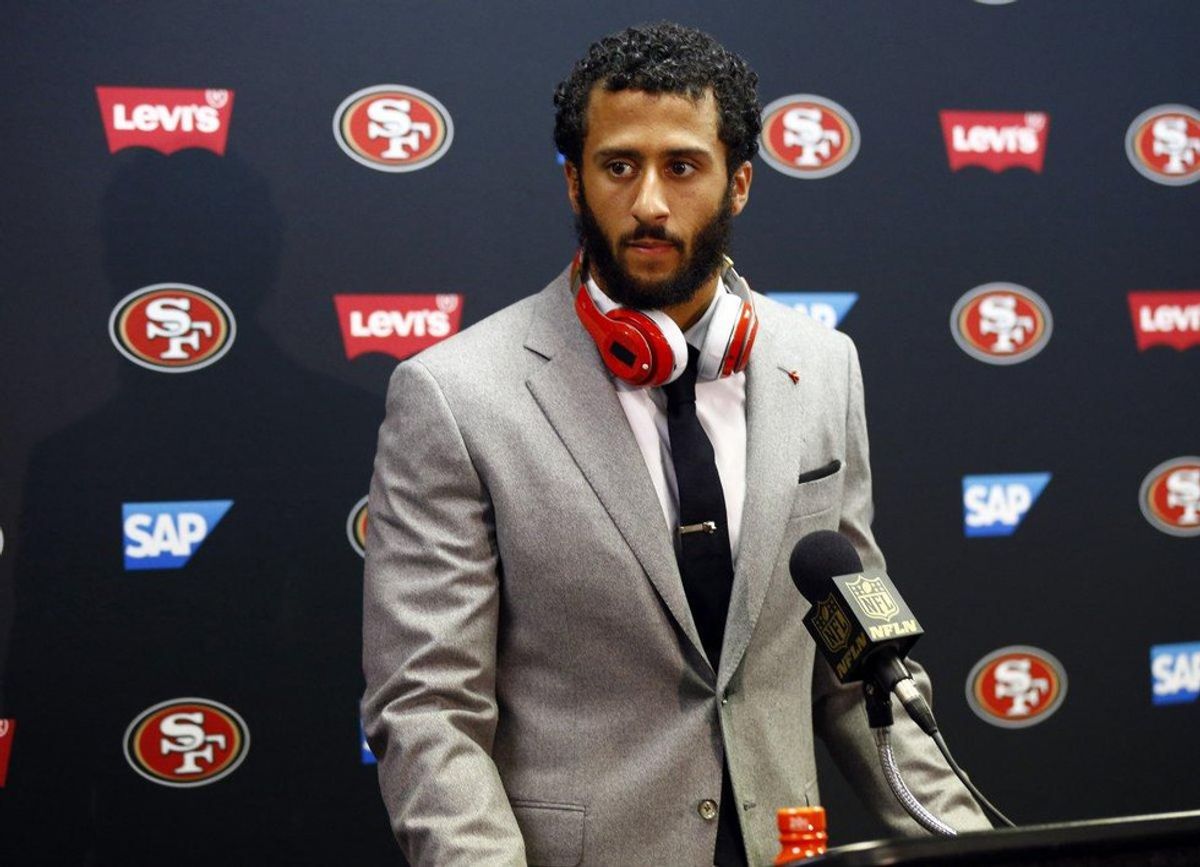 Unless you've been living under a rock for the past 48 hours, you're aware of the Colin Kaepernick story. It was noted that Kaepernick, quarterback for the San Francisco 49ers had been sitting during the national anthem during preseason games.

On Friday, he explained why:

"I am not going to stand up to show pride in a flag for a country that oppresses black people and people of color," Kaepernick told NFL Media in an exclusive interview after the game. "To me, this is bigger than football and it would be selfish on my part to look the other way. There are bodies in the street and people getting paid leave and getting away with murder."

“I think, personally, the flag is the flag. Regardless of how you feel about the things that are going on in America today and the things that are going on in the world with gun violence and things like that. You’ve got to respect the flag and stand up with your teammates. It’s bigger than just you, in my opinion. I think you go up there. You’re with your team, and you pledge your allegiance to the flag and the national anthem as a team, and then you go about your business, whatever your beliefs are. Colin is his own man. He decided to sit down and sit out and that’s his prerogative. But from a personal standpoint, I think you have to stand out there with your team and understand that this is a game and understand that what’s going on in the country.”

Now, it's time for my opinion. From a proud NFL fan and even more proud American, this is for you, Colin Kaepernick:

There is injustice in this country, it is undeniable and upsetting. It is impossible to go one week without turning on the news and not see something incredibly depressing. I understand wanting to stand up to these injustices, but there are other ways you can do it within your platform in the NFL. Remember NBA players LeBron James, Dwyane Wade, Chris Paul, and Carmelo Anthony speaking at the ESPY's about the current race relations in this country?

They addressed the issue with nothing but respect, giving respect to all who have fallen, including the police officers who were murdered senselessly in Dallas. They still showed respect for their country; Carmelo Anthony even went on representing Team USA in Rio and brought home the Gold, making the entire country proud.

Honestly, I don't even think you care about current issues. If you did, you would be using your incredible platform in the NFL to help others like so many others have. Personally, I think you're nothing but a spoiled little brat who wants attention. Millions would do anything to be in your position, and even more would just love to be a citizen of the USA, and you are making a mockery out of your privilege.

I'm sorry to everyone on Team Marco, Noah just is the one.

I know this is an unpopular opinion but I believe Marco is a narcissist hidden behind a nice boy facade. While he did go out of his way to help Elle out with the dance competition, he crossed the line multiple times.