Getting Back Into The Step Of Things
Odyssey
CurrentlySwoonLifestyleHealth & WellnessStudent LifeContent InspirationEntertainmentPolitics and ActivismSportsAdulting
About usAdvertiseTermsPrivacyDMCAContact us
® 2023 ODYSSEY
Welcome back
Sign in to comment to your favorite stories, participate in your community and interact with your friends
or
LOG IN WITH FACEBOOK
No account? Create one
Start writing a post
Health and Wellness

Getting Back Into The Step Of Things

The pain and joy of running again. 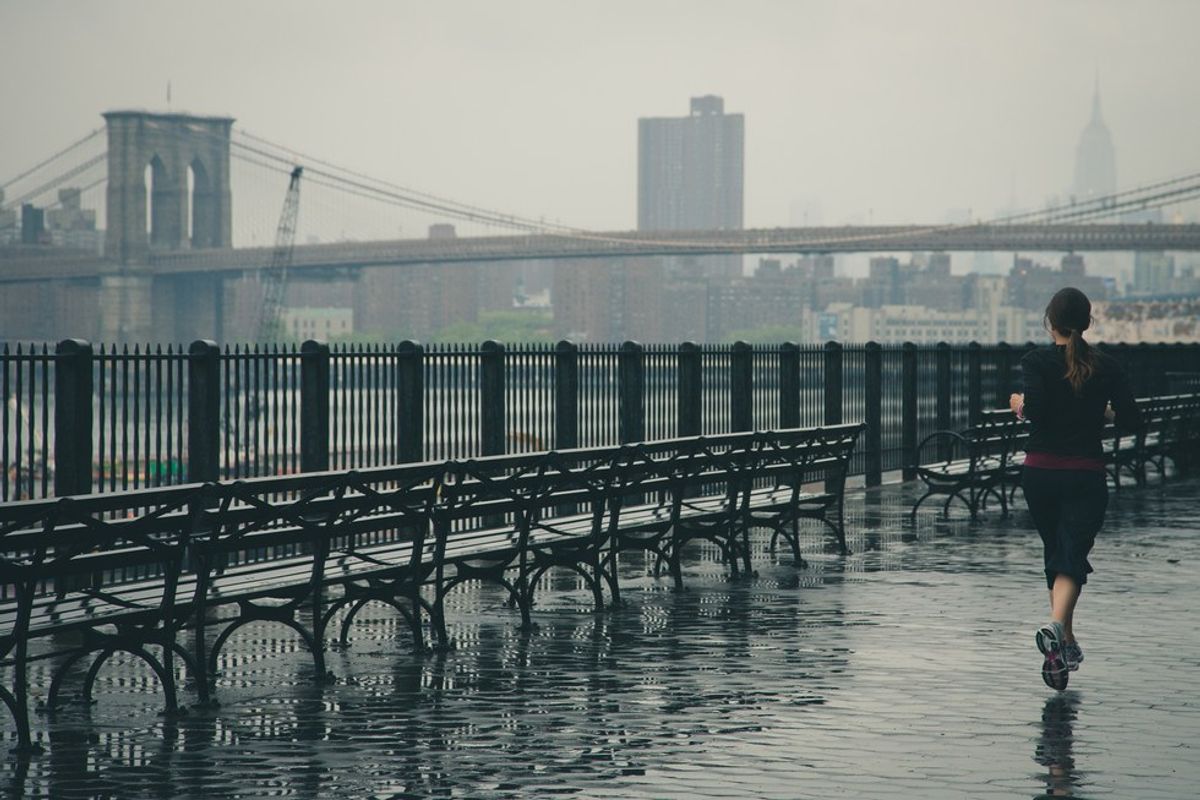 Over the past month or so, I’ve been doing some deep thinking. It’s a side effect of extreme leg burning, loss of breath, chest pains and hazy-mindedness. Don’t worry, I’m not coming down with some strange, dangerous disease, like a weird (and impossible) mutation of a heart attack but I am suffering from the consequences of not running consistently for nine months straight. It’s a sad fact, but the zealous I once had for gliding majestically down long and twisting roads had been segued into school work, so that by the time summer break came, I found my body sorely lacking in the ‘majestically gliding’ department. To be honest, I never glided majestically (c’mon, what average human being can glide with majesty?), however, the feeling of gliding was long gone during my first run of the summer. In fact, I think I traded in my ‘glide’ and ‘majesty,’ for ‘stumbling’ and ‘bumbling.’ In short, I had been demoted to the position of beginner again.

Remember when I said I have been doing some deep thinking? Well, I have been, and I think it’s come to some good. For those who are afraid of being beginners, or becoming beginners again, it’s alright. There’s beauty in the beginning of things, just as there’s beauty in making mistakes and falling over your own feet. If you want to start running again, then do. It’s no good to over-analyze the situation. Yes, you have work to do––yes, you have places you need to be––yes, there’s a whole lotta crazy in the world, but there’s always been a whole lotta crazy in the world. These are things that you really can’t control, but rather than simply giving up on running or exercising, just plan your routine around what you think is important. You have classes from ten to three, but don’t really want to run in the afternoon? Simply run at nine or eight, if you can get up that early. Not an early bird, but really would rather not run at night? Then run in the afternoons, if you can. Decide how far you’ll go, or how long your run will last if you’re really pressed for time and set goals for yourself so that you’ll have something to look forward to at the end.

If you do happen to be the goal-oriented type, then why not train for a 5k or 10k, depending on how comfortable you feel? I’ve been wanting to run a 5k for a while now (a very long while), but haven’t gotten myself to set it down in stone. I’ve picked one out, trained for it, but never signed up for it. Makes a whole lot of sense, right? So, here’s a tip: if you like it, then you should put a ring on it. Okay, I know, I stretched the pop-song allusion, but what I really mean is pick a 5k or 10k, pay the dang fee, and then train. Logic: who would pay for something they aren’t going to run? Illogic: my deranged sense of training for things. If you put things off for too long, you’ll procrastinate to the point where you miss that goal you’ve been aiming for and trust me, that kind of sucks. If you don’t feel like getting swept up in a giant, sweaty pack of humans during your first 5k (or second, or third, or fourth, etc. for the returnees), you don’t have to. There are 5k’s that I like to think of as ‘virtual 5k’s,’ where the runner is tracked over his or her route of choice via fancy gadgets, like iPhones, and when they reach the end of five kilometers, they essentially have completed their first 5k, alone and without the presence of hundreds of other people around them. At the end, a medal is usually sent via mail, as a trophy of your awesome achievement.

While I may not have the perfect track record for consistently running, I do like going for a good jog every once in a while. Keeping up with a pre-planned schedule definitely helps, and if something goes wrong so that the plan isn’t kept, I’ve found ways of dealing with it. Which is the pure awesomeness of just running to run. No one is keeping you to a set schedule. No one is telling you to run faster or slower. No one is telling you that you are horrible at running. It’s all you. You’re the one who’s keeping things in order. You’re the only person who’s pushing yourself to see what your limits are. You’re running for your own reasons, and there’s no negativity in that. I think that’s what I like most about returning to running again. Even when everything’s super complicated, running is there to be blissfully simple.