Forensics, I Love You

Forensics, I Love You

All the reasons this sport for actors is the best high school extracurricular. 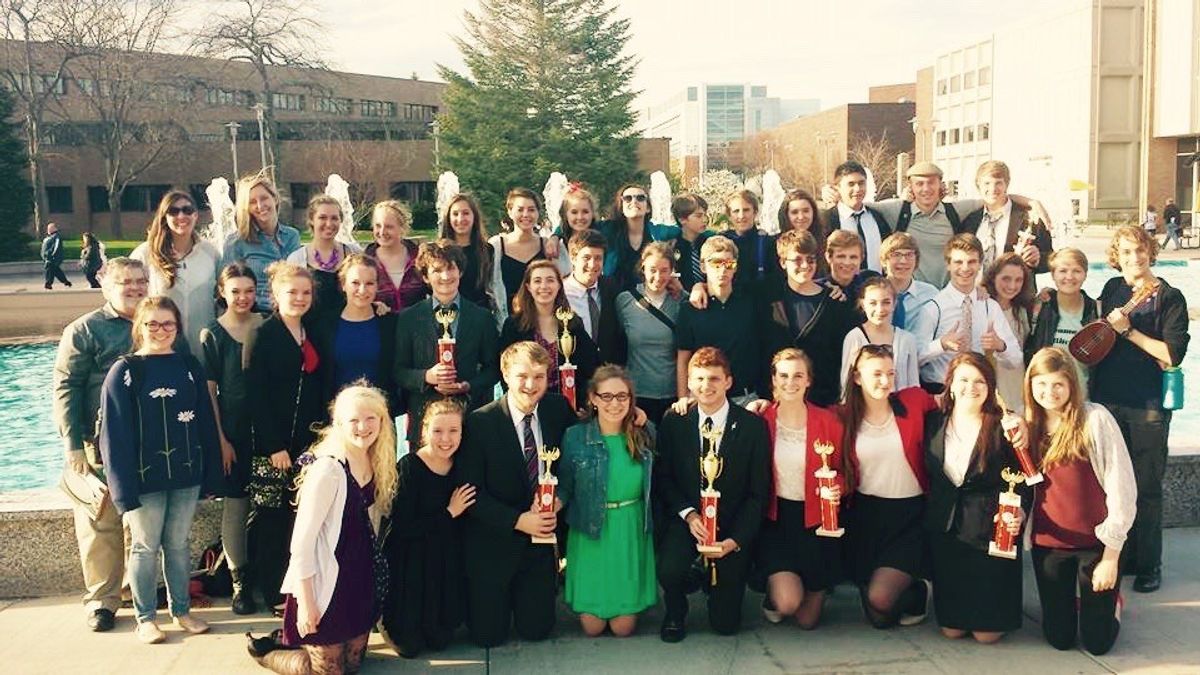 Let me clarify (as I’ve had to about fourteen hundred times): the forensics I’m talking about is competitive speech and debate, and it is not related to science at all.

Each state has its own version of Forensics, but the basic formula is the same. Kids decide which individual event they want to compete in. There are two categories of events: public address (PA) and interpretation (interp). In PA, students give speeches that are informative and factual in events like sales and extemporaneous speaking. In interp, students perform condensed versions of scripts or books as characters in events like dramatic interpretation and storytelling. At tournaments, everyone competes against the other students in their event in preliminary rounds in front of judges, and the top scorers go on to semi final and final rounds. There's the potential for students to go on to regional competitions, state competitions, and even the national competition.

No matter how well you do in tournament rankings, forensics teaches you how to speak in front of people. It gives you valuable experience in public speaking, which is an important skill to have. It teaches you how to own a room, how to command attention, how to act confident even if you feel like you’re about to pee yourself. It helps you realize your own authority. You have a voice that deserves to be heard, and participating in forensics helps you grasp that.

In forensics, there’s the potential for a student to write their own speech or cut their own script, make their own choices about delivery and blocking and set their own goals for how well they want to do at a tournament. In an individual event, when you walk into a round at a tournament there’s no one else you can lean on. You have to perform, and you have to learn to trust yourself.

There are also events in forensics that aren’t individual events. Students can perform a duo, which requires two people performing a script together, or a multiple, which requires three to eight students performing a slightly longer script together. These events require students to work closely together and trust each other, especially because there are strange guidelines for them, like the fact that partners of a duo and members of a multiple cannot touch or make eye contact during their performance.

Even if you compete in an individual event, there are elements of teamwork in forensics. If you have a good team, everyone is very supportive of each other and likes to build each other up. Plus, if the whole team does well, you can win awards as a group at the end of tournaments. This creates a very positive environment in which everyone on the team is cheering everyone else on.

Even though forensics can be stressful and difficult — maybe an understatement, since many people on my high school team (including me) experienced mental breakdowns at some point during our forensics careers — it’s totally worth it. I remember the joys of small successes (like getting that first 1-100), the joys of bigger successes (making it to a final round), the fun of watching my teammates crush their competition, the heart-stopping moment when you wait in a silence the feels like eternity to find out who got first place in your event, the (mostly) friendly competition between rival schools. I remember the loud and song-filled bus rides home from far-away tournaments and the feeling that we’d all accomplished something together. At the very least, we’d all stood up and said something important to us or told a story we knew had to be told. It made the headaches so, so worth it.

Forensics is so many great things, and I’ll be forever grateful that I was a part of it. I miss it (even though there were times that I swore I wouldn’t), and I’d compete again in a heartbeat. Anyone can do forensics, and I wish everyone could give it a try.

Judge and timer, are you ready?