Recap Of The Cruz Vs Garbrandt Fight
Odyssey
CurrentlySwoonLifestyleHealth & WellnessStudent LifeContent InspirationEntertainmentPolitics and ActivismSportsAdulting
About usAdvertiseTermsPrivacyDMCAContact us
® 2023 ODYSSEY
Welcome back
Sign in to comment to your favorite stories, participate in your community and interact with your friends
or
LOG IN WITH FACEBOOK
No account? Create one
Start writing a post
Sports

Recap Of The Cruz Vs Garbrandt Fight

The difference corners can make. 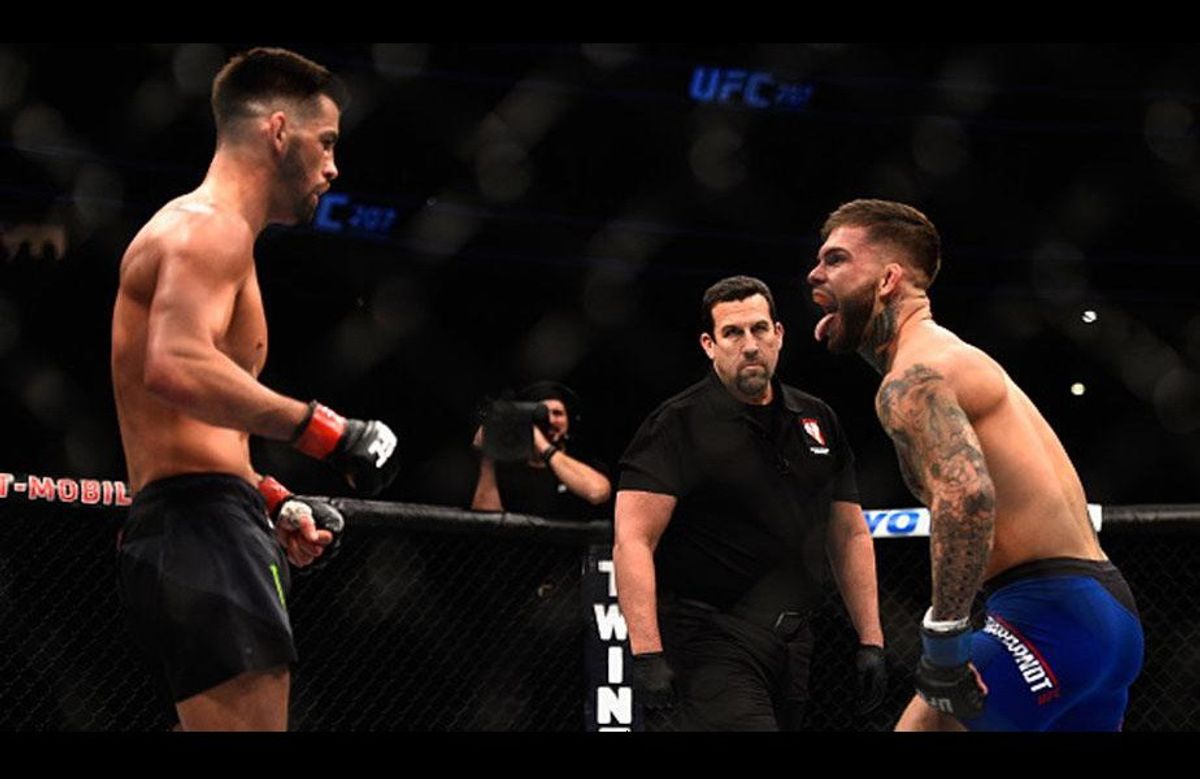 UFC 207: Cruz vs Garbrandt, the spectacular images of the fight

The most recent UFC Bantamweight title fight between Dominick Cruz and Cody “No Love” Garbrandt showed audiences the importance of having the right corner. Cruz and his head corner man Eric Del Fierro compliment each other while Garbrandt and his corner also make for a good combination which serve the purpose of making up for each of the fighter's deficiencies and dispositions.

I suspect that the differences in the cornering that night was as important to the outcome of the fight as the fighters' capabilities on any given day. Both combatants are skilled in their respective talents and the key to victory wasn't necessarily to train harder than the other man, but instead to force him to act against his own best interests.

Dominick Cruz is not just a fighter – he's a mixed martial arts analyst and so he sees the big picture easily. His corner merely hands him the pieces he needs to complete the puzzle that much more efficiently during the fight. His corner during UFC 207 was yelling combinations that might have been able to assist him in holding on to his title. Unlike the coordinated corner of Greg Jackson, however, Del Fierro was just one of several coaches shouting very specific instructions to Dominick. The trainers in Cruz's corner would yell specific combinations one after another and Cruz hardly executed any of it.

Cody Garbrandt's corner from Team Alpha Male was just the opposite. Cody is a very technical boxer, with good balance, footwork, and very good power and speed in his hands. He has ended fights so quickly that it's hard to tell how much of the puzzle he sees. In the one prior fight that went to a decision against Henry Brionnes, Garbrandt made a series of moves which could be read as tactical or strategic errors. He merely followed his man around rather than cutting off the cage.

And instead of mixing his shots in-between the head, body, and the legs, Garbrandt threw bombs at his adversary's head to get the knockdowns. It is fairly unclear from Garbrandt's words or actions whether or not he sees the bigger picture in fights because his constant aim is the knockout and his explicit method of winning against Cruz was via a knockout victory against a fighter who he suspected of being too old to remain elusive.

It must be reiterated that previous information on Garbrandt and Team Alpha Male did not indicate that they would suddenly come up with and execute a game plan that no one had yet successfully implemented.

But what is certain from video and audio of the title fight is that Cody's corner helped him to move pieces in accord with the bigger picture. The Team Alpha Male corner men rarely yelled specific combinations to Cody because he doesn't have trouble letting his hands go. From the outset, they let him know that Garbrandt should attack Cruz's chest because the head is rarely there to be hit.

Constant cries to not play Cruz's game stopped Cody from falling into his usual routines and instead allowed Garbrandt move effectively throughout the octagon and vary his target to increase his accuracy. And when called to “Swag on [Cruz],” Cody would dance, dodge, or otherwise taunt.

Even the first display of 'swag' provoked a response from Cruz. Dominick responded by gesturing back at Cody before uncharacteristically walking into striking range with his hands high in a defensive posture. Garbrandt used the chance to kick Dominick's legs while the former champ was in a less mobile stance. Dominick fell deeper into debt on the scorecards as the rounds went on.

Dominick Cruz is known to be a notoriously competitive person even with regards to trivial and friendly affairs. That sort of hyper-competitive drive may enable a person to endure extraordinary amounts of suffering for a taste of greatness, but it can also draw a person into battles which cost them the war. Between being the victim of Cody's swag and being cut in the beginning of the third round, Cruz was compelled to fight against his own game plan and his corner didn't override his compulsion.

They primarily relayed combinations that might have worked on a boxer below Cody's caliber. Cody can knock your head off if you stay or jump into his striking range and he's done just that to his almost every opponent. What hadn't been seen from Cody – and still hasn't – is an ability to effectively make the cage small using his footwork.

By pitting Cruz's ego against his own interests and strengths, Cody Garbrandt didn't have to show the ability to control the space of the cage. Garbrandt and his corner took away Cruz's mobility and made the bantamweight title match a contest of speed and timing by having Cody move backward as Cruz feinted at him or simply stand in the center of the octagon until Cruz would leap in at him with punches.

When Cruz is relatively calm, he's calculated enough to force his opponent into their weakest positions so that he can systematically take advantage of it with the aid of his corner's call for specific combinations. Garbrandt and his corner

The former champion recently appeared on the Joe Rogan Experience and had a wonderful discussion about his rise in the sport, training, some of his life philosophies, and his most recent title fight. Cruz's style emerged from in response to two major hurdles: first, Cruz often fought as the smaller man and so he had to find a style that that saw him take less damage; second, Standing in front of your opponent with small gloves invites them to sneak them through the guard or to get easy takedowns.

His answer to such problems was to keep moving and to do so at angles. Fighting against type cost Dominick Cruz his title. He stood in front of Cody Garbrandt and was knocked down several times for it. But there is valuable knowledge to be gained from the loss and Cruz realizes it as well. A part of that – no doubt – must entail that he is in sync with his corner to follow whatever game plan they create in the future.