Why Cheerleading Should Be Considered A Sport, And Why You Should Care About It
Odyssey
CurrentlySwoonLifestyleHealth & WellnessStudent LifeContent InspirationEntertainmentPolitics and ActivismSportsAdulting
About usAdvertiseTermsPrivacyDMCAContact us
® 2023 ODYSSEY
Welcome back
Sign in to comment to your favorite stories, participate in your community and interact with your friends
or
LOG IN WITH FACEBOOK
No account? Create one
Start writing a post
Sports

Why isn't cheerleading considered a sport when it meets the exact definition of one? 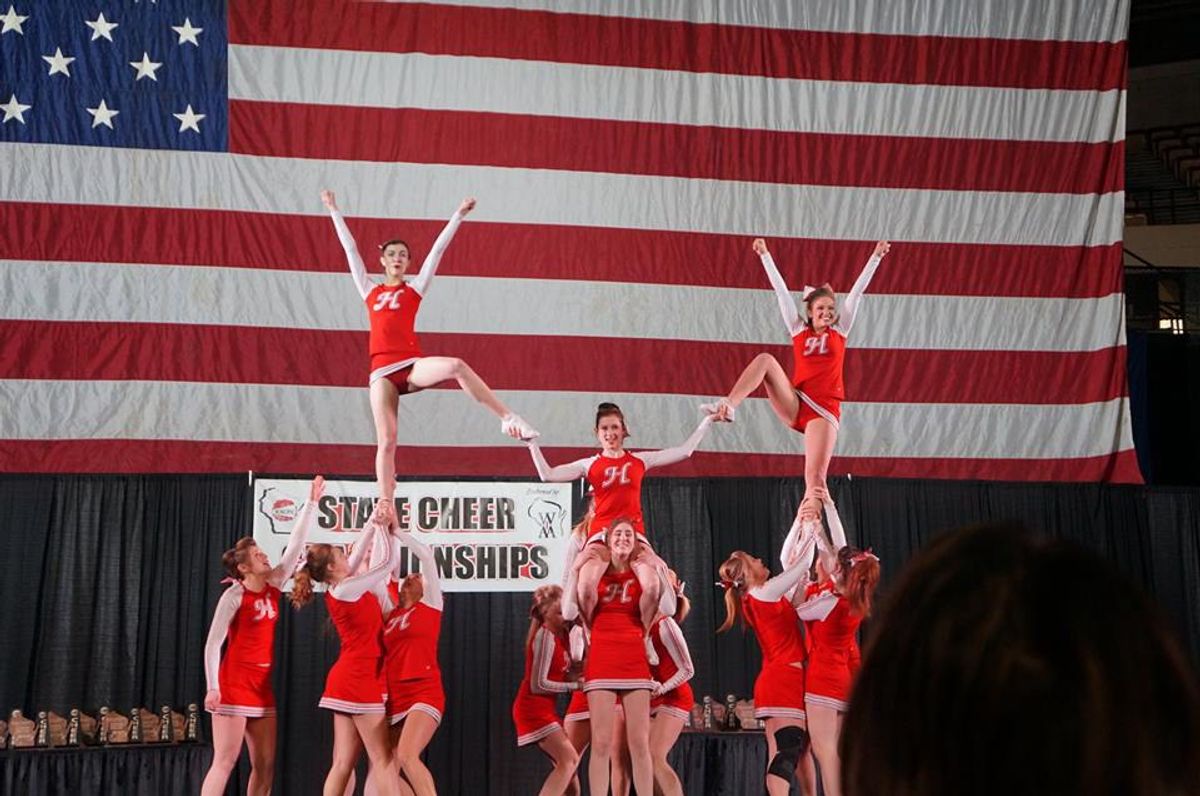 According to http://varsity.com , cheerleading involves five major categories: Stunting, or the lifting and throwing of people; tumbling, or the “flips” and “passes”; dancing, a fast, sharp, and synchronized show for about 15-30 seconds; jumping, where flexibility and strength is demonstrated; and of course, the cheers, a section usually towards the middle of a routine that demonstrates spirit and skills. So what are the individual parts people play called? The girl on top is called the “top girl” or “flyer”, the two holding the girl up are the “bases”, and the one in the back, holding her ankles are called “back-bases” or “backspots”. Competitive cheerleading is judged on several major factors: the difficulty of the routine, the skills demonstrated by stunting, tumbling, and dancing, and the completeness of the routine, or how many mistakes were made.

One qualification for an activity to be a sport, according to http://dictionary.com, is an “athletic ability requiring skill or physical prowess.” Cheerleading is a sport because there is a very large amount of athletic ability required in order for skills to be demonstrated. Great tumbling skills are one aspect of competitive cheerleading that are highly athletic and should contribute to its consideration as a sport. Tumbling requires a relatively high amount of athletic ability, because it takes a lot of training and conditioning in order to do it right. One needs to have very strong core muscles, as well as upper body muscles. Flexibility, an important aspect of many sport trainings, is also necessary in order to complete complicated tumbling. The skills required to do a cheerleading tumbling pass are equal to the skills needed for gymnastics. Many tumbling passes in the Olympics are identical to those done by competitive cheerleaders. Some more challenging tumbling can involve three complete rotations of the body in the air!

Stunting is a very challenging activity involved in cheerleading that requires a high amount of physical fitness and strength. There is an extreme necessity for complete physical fitness in order to do a stunt successfully. I know from personal experience as a base that it's a lot harder than it looks. It's basically like lifting a 110 lb weight above your head, except that this weight can move, and if it falls, it could be seriously injured or die. According to http://varsity.com, there are many skills required in order to successfully complete a stunt. The most obvious skill is proper form. Just like weight-lifting, one must protect their back by lifting properly with assistance from their legs. It is also necessary to lock out your arms and legs in order to be stable. Proper form is even more necessary in the flyer, as a simple movement could cause a collapse. Teamwork is another skill that is necessary. I formed a bond with my stunt group where we could look at each other and know what needed to happen if a stunt was failing. However, if you are unable to work with someone and perform a skill with someone else holding half of the responsibility, then stunting would be basically impossible.

Dancing is another part of cheerleading that is a very intense, fast section of a routine that is very challenging to properly carry out. A significant amount of athletic ability is required in order to complete a cheer-dance routine. The routines are fast-paced with sharp movements that without proper training and a lot of practice are very hard to do properly. The dancing is also a cardio workout that engages many muscles. The skills required for dancing could potentially be more challenging than those for normal competitive dancers. Because dances are only 15-30 seconds long, it is completely necessary to be 100% precise with every movement. Your specific section of the dance is intertwined with every other person doing the dance; this means that if you mess up or fall behind, everyone else could potentially mess up or even run into you.

Cheerleading is competitive within the team as well. Many cheer teams hold auditions in order to select the best team-members possible. Within the team, there is also a competition to see who will be the center stunt group. This is the group of people who stunt front and center-stage, and are most likely to be watched by the audience. Team members compete for the first/last tumbling pass. These are the passes that leave a lasting impression, as people remember what comes at the beginning and end most. The girl that is in the front center for jumps also probably competed for that spot. Usually, the person in the center has the best jumps, as they are the person that pulls the whole group together, and the person that the crowd is most likely to watch. Lastly, girls compete within the team to be in the front for dances. Usually, choreographers hide the cheerleaders that aren’t as strong of dancers in the back, or in a stunt. The girls in the front are the best of the best, and have really made an effort for that spot.

According to dictionary.com, the last aspect of a sport that is necessary for consideration is a tight set of rules in which the activity must abide by. There are two major cheerleading corporations, the NCA (National Cheer Association) and the UCA (United Cheer Association). These two organizations have specific rules set in place in order to protect cheerleaders and regulate cheerleading routines. For example, it is “illegal” to throw a basket toss on a hard track during football games, but it is legal to do so if a cheerleading mat is underneath or if the track is soft.

So why does cheerleading affect the general public? Well, according to Jack Lindamood from his article “What Impact do Cheerleaders have on the Performance of Sports Teams?”, the noise and enthusiasm that are caused by cheerleaders actually benefits sports teams. With cheerleading as a considered-sport, the cheerleaders will have more opportunities to become better cheerleaders. If cheer was considered a sport, then more money from high school and college sports funds can help to make these teams more beneficial to the school. Someday, your daughter or son might be on the cheerleading team, on the basketball team, or involved in football. Cheerleading will help the basketball and football teams do better, bring more trophies and respect to your school, and gain more respect and will receive scholarship money for its members.

Cheerleading meets every single qualification required in order to be considered a sport, and involves many parts of weightlifting, gymnastics, hurdles from track, and dancing. It requires a very high amount of skill and athletic ability in order to be done correctly, and is extremely competitive, both between different teams and individuals within a school. There are many organizations that follow the same tight-knit rulebook that regulates cheerleading. This is why I believe that cheerleading should be considered to be a sport due to its competitive nature, the athletic ability that it requires, and the rules that govern it.

Nicole Marie Nigro
Individual Creator
8536
c1.staticflickr.com
Where to start...... Let me start with the cliche that life throws us curveballs and what we do with it is what counts.