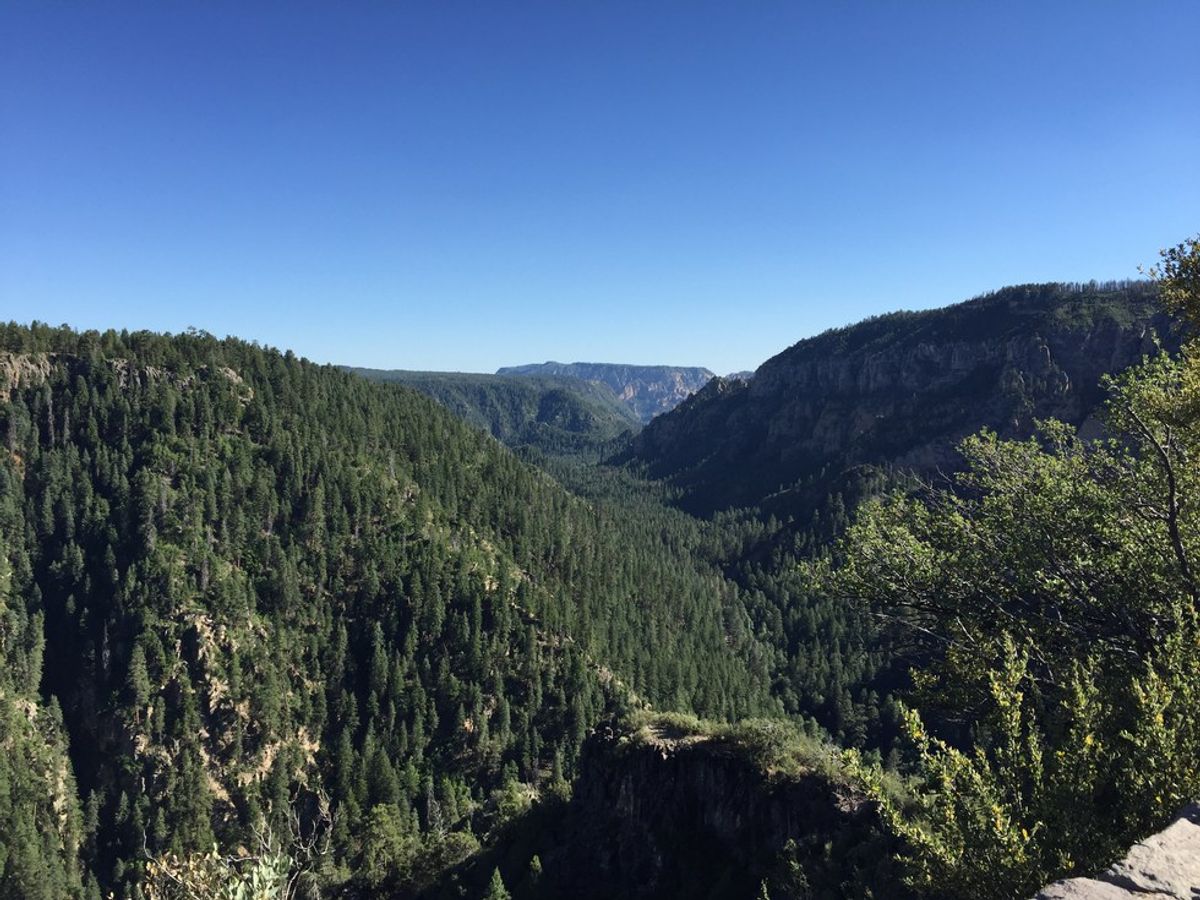 When I got off the plane, my friend, Carolyn, told me to stay inside until she got there unless I wanted to melt. When she got here and I went outside, it was extremely clear to me why. In the shade of the pick-up area at the airport, it felt like I was standing in the sun in the middle of a paved parking lot at home.

Fortunately, we left for Flagstaff almost immediately, which ended up being a lot cooler and a little closer to the weather I was used to. After getting up at 5:00 a.m. for my 9:40 flight, only for it to be delayed 2 hours, I was pretty exhausted so throughout the day I had to get my caffeine fix. By the time we got to Carolyn's apartment in Flagstaff, I was feeling a little better but I was still pretty exhausted. It was a pretty quiet first day.

Our second day, we went to downtown Flagstaff and wandered around all of the stores. It doesn't take long to fall in love with Flagstaff, at least for me. It's located in the mountains, all the restaurants we visited were good, and there were lots of places to amble. Since it was still pretty early in the day, we decided to go to Sedona, where we had planned to go, but didn't have time to, when I was here in January. It was so hot and bright out but it was still cool to get to see, even with all the little tourist shops.

Monday started, as did most of our days, with a stop for our caffeine fix. Dutch Bros Coffee, which I had never been to, was donating all profits towards the Second Chance animal shelter. Carolyn, her roommate, Molly, and I all went out for coffee and stopped by Fractured Prune for some of the most delicious donuts. The rest of the day was mostly dedicated to wandering around downtown yet again. Tuesday, we planned on going to the Grand Canyon extremely early, which meant taking it easy for the rest of the day so we could handle getting up.

On Wednesday, Carolyn, Molly, and I went for a (short-lived) hike and spent the rest of the day watching Food Network, as is our way.

When I was here in January, before Carolyn had graduated, she showed me around the Northern Arizona University campus. We went around again, stopping by the bookstore, and the Comm Building she spent the majority of her time in. Shortly after, we went to downtown Flagstaff, as we frequently did. Spending so much time down there made it really clear why it would be so hard to leave. I always knew leaving Arizona was going to be difficult because it meant leaving Carolyn until we could both manage to see each other again, but leaving Flagstaff was difficult in its own way. It's beautiful and unique and I loved every second i spent there.