Despite The Election, Hate Won't Win In America
Odyssey

Despite The Election, Hate Won't Win In America

The only way we are going to make it through is by standing together. 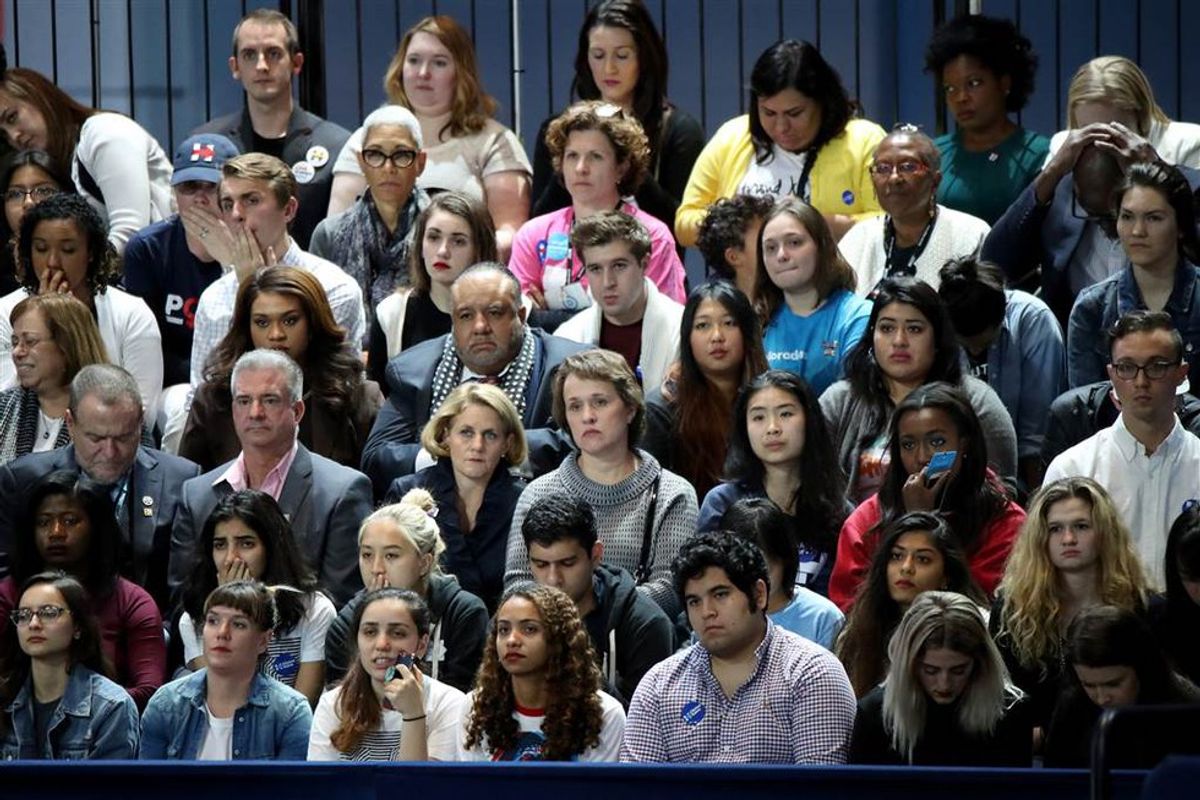 "I’m writing this on November 9th, the day we all discovered who becomes president of the United States for the next four years. I woke up to text messages from my family and friends this morning and the terrible realization that Donald Trump has won the election. I sat on my bed, my room messy and dark, and had the dizzying feeling that I was in some surreal alternate universe. There was no way this is reality, right? Wrong.

I am a white, cisgender, straight woman living in the United States. I recognize many of my privileges. I walked into town yesterday and got to vote for the first time. I pray to God it won’t be the last time I get to vote.

Even now as I’m writing this, I have so many thoughts and emotions: fear, sadness, anger, resentment, restlessness, anxiety, sympathy and confusion. How could this have happened? Have we learned nothing through the centuries? I’m fearful because Trump and his following are very dangerous people. I’m afraid because, at this point, people need someone to blame and right now white people are at the top of the blame list. I didn’t vote for Donald Trump; how could I have? The only people we can blame are Trump supporters, and even then they exist because of deeper issues held within our society. I’ve heard claims it is the lack of education in our country that has caused this problem. I certainly don’t disagree; however, it is so much more than that. I think part of the problem lies within the very nature of what it means to live in the United States. We are the land of the free, where the streets are paved with gold, right? There is so much diversity in beliefs, ethnicity, culture, ideologies and practices. There is also an issue with poverty, education, available resources and jobs, and trust in our government (not saying we should trust them, but it is easy to get carried away sometimes).

People are angry. They are scared, probably even terrified. What better person to choose as a head person for change than an angry man claiming to change the system and start a revolution? I’m not saying it’s right, but it’s part of the reason people voted for Mr. Trump.

Never in all my life did I even think someone like Donald Trump could be president of this country. It’s unfathomable. I sat on my bed this morning and asked myself, “What do I do now? How can I move forward?” Right now it seems like everything is going to shit. There is an abundance of fear, hate, judgment and anger in this country that I feel like I’m drowning in it all. I know I’m not the only one. I can understand, even relate to, the anger non-Trump supporters are feeling right now, but I’m troubled. Donald Trump didn’t win the popular vote-- that is important to remember.

We all played a part in this election. I won’t deny that it is white people who have helped get Trump into office, but it isn’t all white people, it isn’t even most white people. It isn’t only race that impacted opinion in the polls-- it was also education level, though uneducated white individuals were the highest in the polls to vote for Trump. You can check out the stats here.

Blaming and pointing fingers isn’t going to help. It is actually going to make things worse and ultimately help Donald Trump do the things he wants to do. The whole point is what is done is done and the only way to move forward is to stand together. If you have ever seen the sitcom Seinfeld, you may be familiar with the famous quote, "A George divided against himself cannot stand!" Granted, it is from a sitcom, but the connection here is that we are weaker when we are divided and pointing fingers. Sure, a lot of people voted for Trump, but a lot of people voted against him too. There are so many people in this country that don’t want him to be president. I’m a woman and I am an American. Chances are if you are reading this, you are American too, no matter how else you identify yourself. America is complex and diverse and isn’t all horrible. The people who are against the sexism, racism, bigotry, homophobia, xenophobia and overall ignorance of power-hungry Donald Trump are people who represent this country too. We matter. We have a voice and power.

The only thing I can think of to do on a small scale is to spread love. Spread your love all over the damn place like peanut butter on a toasty slice of bread. Sprinkle it over your peers, strangers, friends, family and acquaintances. We have today, maybe even tomorrow, but nothing is guaranteed. Love unconditionally and forgive constantly and find a way to unite and stand strong despite these terrible circumstances. Don’t let everything Trump stands for win. Don’t let the weight of it all crush you and leave you broken. Recognize the strength we have, not only as individuals, but as a collective community. Not all of America is bad. People like us have the potential to drown out all the hate and anger and create something beautiful but we can’t do it with hate and anger in our hearts.

This is what I wrote four days ago. Some things have changed, but much of my emotions still stand. It is clear at this point that Donald Trump won’t be doing some of the things he said he was going to do (or so he’s claimed). We know that Mr. Barack Obama will be advising him closely and I hope that has a good impact. The plan to build a wall between the United States and Mexico apparently still stands, but I have my doubts about it actually working out.

As of right now, Donald J. Trump will be the president of the United States for the next four years. The way I see it is the only way we are going to make it through is by standing together. Please don’t forget that this country has been through so much. We have accomplished so many things. Mr. Trump becoming president doesn’t mean we can just forget about all the good this country has to offer. I’m pleading for you to not give up hope or give into anger and hatred for this country, which seems to have failed us. There is still so much love and support in this country; there are still good people and allies and people who want to change this country in the best way. The second we lose sight of that is the second we stop mattering in this country. Never lose hope. Never forget the love that exists around you and within you. It’s damn powerful and it will win.