Seven reasons why anyone who needs or wants to do a sport should check out crew. 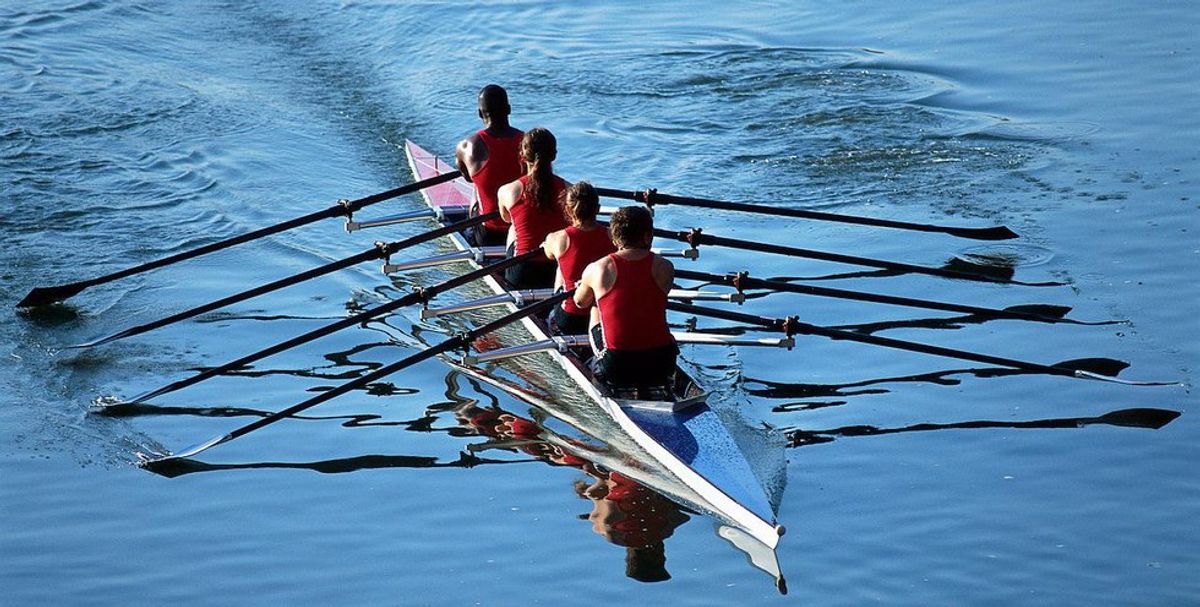 Rowing, I find, is a very underappreciated sport that most people don't know much about. So let's start out by defining what rowing is. Before I began rowing myself, the image that popped into my head when I heard "rowing" or "Crew", was, at best, a bunch of huge guys in a boat rowing a their butts off while someone sat in the front yelling "stroke!" every second or so. At worst, the image that popped up was just some salty old fisherman in a rowboat. I assume that most people, especially those of us in towns without school-organized rowing teams, think of rowing and think of these images. So let's set the record straight:

Rowing, or crew as it's sometimes known, involves a number of people, from one to eight, performing the rowing motion in sync. There are two types of rowing: sculling, where each person has two oars, involving boats that seat one, two, and four people; and sweeping, where each person has one oar, involving boats that seat two, four, and eight people. Sometimes a boat may have a cox (you're allowed to giggle), who, instead of rowing, steers the boat and directs those who are rowing. In boats without a cox, bow seat (the seat furthest to the front) does the cox's job. It is much more common for sweeping boats to have a cox than it is for sculling boats, and eights always have coxes.

As for the motion of rowing, here's a GIF to demonstrate:

Not how you pictured it right? I was certainly surprised when I found out what it actually looked like. Ideally, this is what rowing is, but this guy is a beast who makes it look easy, so novices shouldn't expect to look like this immediately.

So now you know a little bit about the sport of crew. But why should you look into rowing? Well to start out:

Check out the thighs and arms on these guys. Granted, they just won the gold medal at the London Olympics, but even for a novice, rowing is an excellent workout for most major muscles and muscle groups, as well as being some of the best cardio you can get. Add in that a typical competitive team practices for at least two hours four times a week, and you have a recipe for burning some serious calories and building some serious muscle.

Rowing has changed my outlook on life in more ways than I can count, and I know many rowers who say the same thing. I am a harder worker, a better teammate, and a more stable person than I was two years ago, before I started rowing. At the risk of sounding cheesy, crew has made me who I am today.

3. Height/weight/body type will not decide if you are good or not

OK, so this might be a little untrue. It is generally true that tall, slim people dominate the upper echelons of rowing (just watch the Olympics or the world championships). However, it is effort, not shape or size, that decides how good of a rower you are in the end. I have won races against boats with people twice the size of my teammates, and I have lost to people smaller than I am (I'm about 5'9). I'm not saying you can be 5'2 and win every race if you practice more: I'm saying that it is possible to be 5'2 and win, and that you can be 5'2 and still have a great time. Also, for you really tiny, really light people, you can become a cox, and believe me, coxes are at least as respected as anyone who pulls on an oar.

4. You can chose how you row

Not much of a teammate? Row a single! Love the dynamic and intimacy of tennis pairs or synchronized diving? Row a double or a pair! Like being part of something big, and getting to know four to nine people? Row a quad, a four, or an eight! There is a boat for every kind of person, unless of course, you're the kind of person who doesn't like rowing.

5. You get to attend regattas

OK, I should probably explain this picture before I say anything else. If you win with a cox, its customary for rowers to throw the cox off the dock after you get off the water. Just one of the many fun things that can happen at regattas, the rowing equivalent of a track meet. There are vendors selling various cool rowing related items, teams from the surrounding towns and states, and usually plenty of good food. However, you are there to race. While it can be nerve-wracking waiting to race and disappointing if you lose, the fun usually outweighs the negative aspect. Plus, there's always a chance that you come home with a shiny new medal...

Its possible to get into some very good schools off of a rowing scholarship, as the above picture demonstrates. Because rowing is a sport most people start in college, rowers who are already experienced when they get to college are very valuable. If you're ambitious and talented, you can get recruited into legendary programs with ancient rivalries and storied coaches. Even if you don't end up getting recruited, or if you don't plan on rowing in college, rowing looks great on your transcript.

When you join a club team or a rowing team, you get to know your teammates and coaches very well. After all, you might be spending 12 hours a week with these people. But by the end of the season, when all is said and done, your teammates, those you are in the boat with especially, are some of you closest friends. This fall season, I'm rowing in a quad, and although we've only competed in one race so far, we're already super close. In rowing, you can join for any number of reasons, but you stay for your team.

I row at Nereid Boat Club on the Passaic River in Rutherford.