5 Reasons Why I Love Marching Band

5 Reasons Why I Love Marching Band

It's more than just band camp. 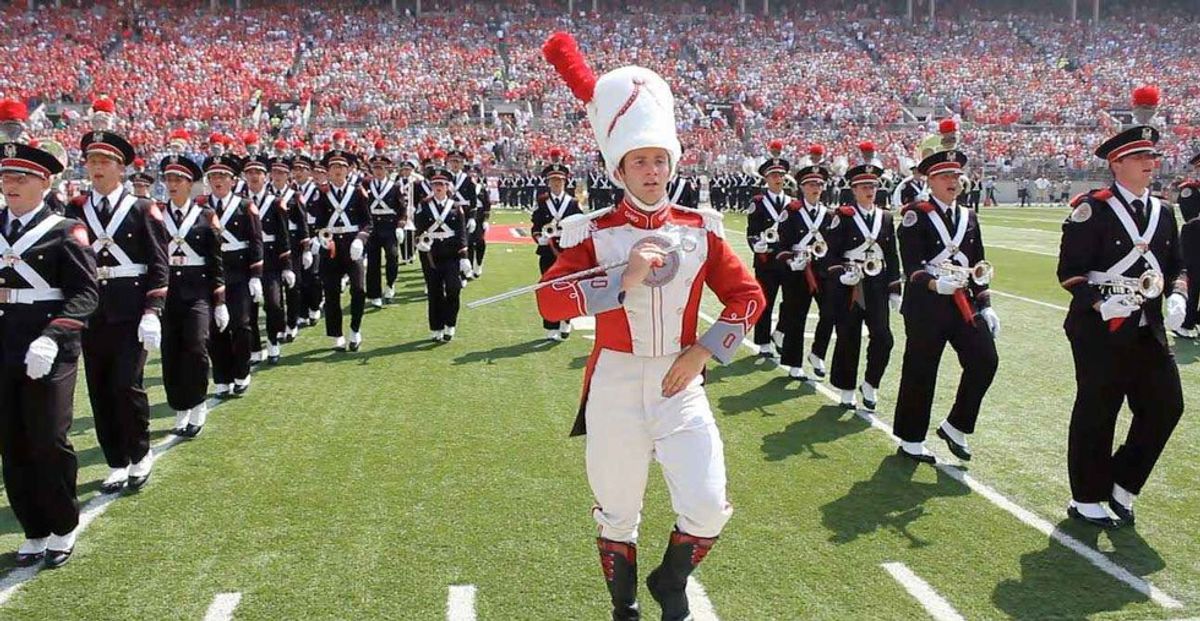 It’s that time of year of again…earlier sunsets, school back in session, hot days, cool nights, and marching band.

Well, band camp anyway. As of today, August 23, the Wilkes University Marching Colonels band camp is in full swing, as are many other camps in these weeks before school starts again. We are working hard to have our full show on the field by the end of this week, ready for our first game on September 2 (btw, if you live around Wilkes-Barre, you should totes come to the game. Kickoff is at 7pm!). For the foreseeable future, I am stuck on the sidelines due to an injury, which I knew going into camp. I did not think I would miss is as much as I do, and I want to share with you guys why I love it as much as I do.

Band is different than your normal sports teams. I played soccer in high school, and I never really felt truly part of the team because I was not a good enough player to be on the A-team. But with band, everyone participates, regardless of how well you march or your skill with an instrument. While those things are important—they’re kind of what the whole thing is built around—every student has a necessary role to play for the band. When you march, you are not simply a single musician or color guard member. You are part of a larger instrument. You have to be aware of where your bandmates are so you can fit into the shape…and also not get run over by the tuba player or hit with a flag. We are all responsible for sounding good and looking good on the field.

The camaraderie is amazing.

You literally spend so much time with your bandmates you become like one big family. During band camp, you’re probably spending 12 hours a day with them, not including any after camp activities you may do (like tie dying T-shirts!) or if you live in the same hall or hang out after camp ends for the night. We are there for each other. Sometimes there’s a lot of emotion out on that field—the music speaks to us in a much stronger way than it speaks to the audience, because we have to play it. Sometimes that means there are going to be tears. And you know who’s going to be there to give you a hug? Your bandmates. And they’re going to get it because they are there with you, and for you. You learn how to be aware of your bandmates in a way that you never would have otherwise.

The inside jokes are what keep us going through the long season.

After so many long days and nights of too little sleep and early mornings, bands have their own jokes. Some are new, some are seasons old. But those funny moments and memories of seasons past remind us that even though we’re having a rough day, what we’re doing is fun and we’re going to get better. Or you have silly vocals that help you bring your horn down in time or turn backfield when you’re supposed to. Either way, with all the hard work comes a lot of fun moments too, and those are the moments that remind us to keep pushing ourselves, even when we’re tired.

I put these into one because they feed into each other. Like any sport, there is an element of fun to it, otherwise you wouldn’t be doing it. You’re learning music for goodness’ sake! There are parts of our drill that we literally stand there and jam out to our music. That’s wicked fun. But it’s also rewarding. You have to learn drill and music for a 10 minute show and commit everything to memory—where you’re supposed to be on the field, in the song, what visual you might be doing, and so on. To hit your dot after struggling with that set or FINALLY hitting that stupid run after hours of practicing the damn thing is an incredible feeling. It’s like finally making that shot on the court, or acing that test you’ve been studying weeks for. You feel good about yourself, almost like you can do anything.

There is something powerful about being called to attention, having your horn (matchstick or otherwise) out in front of you, and making yourself look big and proud and standing ramrod straight in front of an audience. There is something striking about watching a band march cleanly down a field, with neat, straight lines, turning sharp corners, taking crisp steps over the grass, and something even more wonderful when you’re a part of that. There is something moving about hearing the whistling songs of the woodwinds, the warm, round notes from the brass, and the clacking, crashing sounds of the drums as they march across the field. It gets your heart racing. You feel every note, every emotion, every crash of the drums and every cry of the wind instruments. You are a part of that, and it is exhilarating.

These words do not really capture my love for band. There are no words that will truly do that, that will truly make someone understand this feeling in my chest when I march, or when I watch my band out on that field. They just don’t exist. But I think they will resonate with my fellow bandmates and hopefully they will help someone else understand us band nerds a little better :)